David Howell “Dave” Petraeus, the Director of the Central Intelligence Agency and former Commander, Central Command (CENTCOM), was born at Cornwall-on-Hudson, New York on November 7, 1952.  He graduated from the United States Military Academy (ranking 39 of 833) with a Bachelor of Science degree and a commission as an Infantry officer, on June 5, 1974. 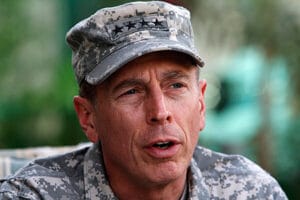 In his early career, Petraeus served in the 509th Airborne Battalion Combat Team at Vicenza, Italy and the 24th Mechanized Infantry Division at Fort Stewart, Georgia. After serving as the aide-de-camp to Army Chief of Staff Carl Vuono, Lieutenant Colonel Petraeus commanded the 3rd Battalion, 187th Infantry Regiment in the 101st Airborne Division (Air Assault.)  He almost died in 1991, when he was struck in the chest by an errant M-16 rifle bullet on a training exercise.  He later commanded the 1st Brigade of the 82nd Airborne Division.  Petraeus subsequently broke his pelvis, during a hard landing on a parachute jump, but again recovered and commanded the 101st in Iraq.  In July 2004, he was promoted to lieutenant general and selected to command the Multi-National Security Transition Command – Iraq.

Dave Petraeus was the General George C. Marshall Award winner as the top graduate of the U.S. Army Command and General Staff College in 1983.  He later received a Ph.D. degree in International Relations in 1987 from the Woodrow Wilson School of Public and International Affairs at Princeton University, which led to an assignment as Assistant Professor of International Relations at the United States Military Academy.

After several years in Iraq, General Petraeus concluded that a risky “Surge Strategy” was perhaps the only way to bring Iraq out of its semi-civil war status.  In January 2007, he was selected to command the Multi-National Force – Iraq.  On October 31, 2008, David Petraeus assumed command of the U.S. Central Command.  This assignment was interrupted in June 2010, when he was selected by the President to become the Commander, U.S. Forces in Afghanistan.

General David Petraeus retired from the Army on August 31, 2011.  In his remarks at David Petraeus’ Army retirement, Admiral Michael Mullen, Chairman of the Joint Chiefs of Staff, compared Petraeus to Ulysses S. Grant, John J. Pershing, George Marshall and Dwight D. Eisenhower as one of the great battle captains of American history.

David Petraeus was sworn in as the Director of the Central Intelligence Agency on September 6, 2011.  However, on November 7, 2012, just weeks after the coordinated attack against two United States government facilities in Benghazi, Libya, by members of the Islamic militant group Ansar al-Sharia, CIA Director Petraeus submitted his resignation.  The following day, the President accepted it.

A later investigation found General Petraeus had improperly stored classified information and had not fully cooperated with investigators into this matter.  He pled guilty to several misdemeanors and received probation, with a $100,000 fine.  During the following years, he held several prestigious academic posts and served as a high-level consultant to government officials and private businesses.

To this day, the details of David Petraeus’ resignation remain somewhat hazy and unclear.  Was the incident truly an ill-advised relationship between the General and his biographer, which then led to violations concerning the storage of classified information?  Was it “taking one for the team” over the failure at Benghazi?  Or was it that the intelligence community, aided by an element of the FBI, disliked the former Army general, who had no true experience in national level intelligence matters, and then perhaps illegally tapping his phones and email — an example of the swamp devouring its own?

Or was it a pre-emptive coup against a popular potential Presidential candidate who could have posed problems in the nominative process for 2016?