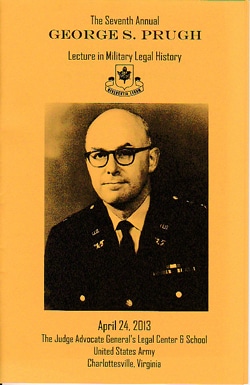 In April  2013 French MacLean, US Army Retired gave a presentation on The Fifth Field to the Judge Advocate General’s Legal Center and School in Charlottesville, Virginia, as the recipient of the Seventh Annual Major General George S. Prugh Lecture in Military Legal History.

Major General George S. Prugh became the Army’s Judge Advocate General in 1971 and served four years in that position.  He played a significant role in developing additional Protocols to the Geneva Convention during this period.  Shortly before his death in 2006, he provided a generous donation to establish an annual lecture in Military Legal History at the JAG School.

Some 140 majors and lieutenant colonels in the JAG Corps attended the presentation as did Brigadier General Flora Darpino, the Commander and Commandant of the Judge Advocate General’s Legal Center and School.

The presentation centered on the General Courts-Martial of 96 American soldiers in Europe and North Africa and their subsequent sentences, executions and burials in France.  The subject is also a book by Schiffer Publishing, by the author.