This is a brutal story – but from the safety of fifty years distance in time – it is an extremely compelling one.  It is also an enduring lesson that a military unit, formed under an evil ideology, led by a social outcast and composed of vicious criminals, will sink to its lowest common denominator – hate.  The Dirlewanger Battalion, also known as “Sonderkommando Dirlewanger” (Special Commando Dirlewanger) was perhaps the least understood, but at the same time the most notorious German SS anti-partisan unit in World War II.  German propaganda correspondents and wartime photographers did not follow them in action.  And for good reason.  Wherever the Dirlewanger unit – named for and led by Oskar Dirlewanger – operated, corruption and rape formed an every-day part of life and indiscriminate slaughter, beatings and looting were rife.

Formed as a battalion of convicted poachers in 1940, the unit operated in Poland until 1942, guarding Jews in forced labor camps and making life miserable for Poles in Lublin and Cracow.  From there, Dirlewanger spent two years combating partisans in central Russia, giving no quarter and expecting none in return, during vicious fighting against an elusive foe in the midst of inhospitable swamps and dismal forests.  In 1944, Dirlewanger savaged Warsaw during the Polish Uprising, before moving to Slovakia to crush another rebellion there.  The end of the war saw the unit, which was now a division in size, fighting for its life south of Berlin against the Soviet Army.

Medieval in their outlook on war and certainly not indicative of many German military formations, this unit none-the-less remains a reflection of a segment of mankind gone mad in the inferno of World War II on the Eastern Front.

As one reader noted, “This book is not for the ‘faint of heart.'” 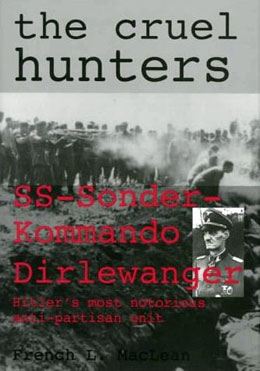 Comments on The Cruel Hunters

“MacLean makes excellent use of his considerable resources to catalogue the activities of Dirlewanger and his band of merry men. It is well advised to remember that the daily routine of murder, rape and pillage reported in meticulous detail did not happen in the Middle Ages, but in the mid-twentieth century.”

- Richard Rhodes Pulitzer Prize winner – The Making of the Atomic Bomb; author of Masters of Death: The SS-Einsatzgruppen and the Invention of the Holocaust