Inside this book, the first of its kind devoted solely to Nazi Germany, are quotations from 289 men and 5 women in the Third Reich.  Adolf Hitler – the Führer – has 610 quotes, including 37 key remarks from his infamous book Mein Kampf.  One would expect this from the leader of a régime, but also within are quotations from many other figures.  The German Army has 77 contributors, led by the mercurial Erwin Rommel with 51 quotes and tank genius Heinz Guderian with 49.  “The Fat One,” Hermann Göring, with 153 quotes, leads 25 Luftwaffe personalities uttering memorable lines.  The German Navy, featuring 24 officers, has submariner Karl Dönitz with 64 quotations, while the shadowy figure of Germany’s intelligence chief, Wilhelm Canaris provided some 35 more.  The SS has 103 men quoted; from this group, the dreaded Heinrich Himmler provided 100 excerpts, while Adolf Eichmann – a major figure in the Holocaust – added 26.  Josef Goebbels is represented by 100 quotes; even “silent” Martin Bormann is caught uttering 33 memorable lines.

Also included are the “last words” for 69 individuals facing execution for war crimes and crimes against humanity, as well as those falling in combat. Behind their backs, many Nazis referred to their comrades by nicknames or epithets (some less than flattering); these also are included here.

All 294 men and woman quoted in the work are described in concise biographies.

With all quotations documented and footnoted, and many put into historical context, this is an easy to use valuable resource for all students of World War II history, writers and researchers of military, political and Holocaust subjects, and all those interested in the most significant epoch of the 20th century. 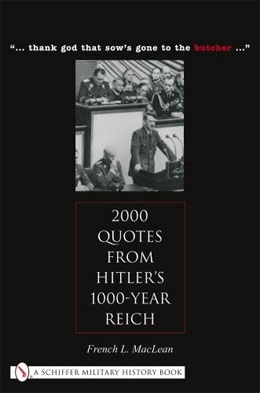 “We didn’t contemplate killing anybody in the beginning.”

“I was only doing my duty and following orders.”

“Better to shoot two Poles too many than two too few.”

“I’ve never had a man in front of me yet whom I did not break in the end.”

“If you have too many patients in your institution, just beat them to death.”

“Am surrounded by heavy units…we shall fight to the last shell.”

“Himmler was weak, unpleasant and slimy.”

“Goebbels ought to be shot.”

“Hitler cultivated this evil in man.”

“I will leap laughing to my grave, because the feeling that I have five million people on my conscience is for me a source of extraordinary satisfaction!”

“Whenever a guard is illegally brutal to an inmate, he will be expelled from the SS. We will do our best to preserve the good name of that organization.”

“The house to house combat costs us a lot of sergeants. If the officers and sergeants don’t lead out, the men don’t follow.”

“Jewish death lists are my favorite reading matter before I go to sleep.”

“No, of course Hitler didn’t order the mass murders. Some sergeant must have done it.”

“It takes a bomb under his ass to make Hitler see reason.”

“Of course, I considered our treaties as so much toilet paper.”

“Concentration camps were not my responsibility.”

If these quotations peak your interest, come inside and find 2,646 more fascinating and outrageous comments by Adolf Hitler and his followers in Nazi Germany.

Last Days of the Nazis – New Time and Channel

Dr. Fritz Todt, Minister of Armaments and creator of the German Autobahn