The SS Officers Who Ran the Nazi Concentration Camp System

Inside these pages, you will meet over 960 infamous men – the officers of Nazi Germany’s Totenkopf (Death’s Head.) You will encounter the 256 SS officers who worked at Dachau – the SS concentration camp that doubled as a training school for death. You will encounter twelve SS officers who served in Treblinka and the other very secret camps of “Operation Reinhard” – Heinrich Himmler’s extermination plan for the Jews of Poland. And, you will confront the 161 SS officers who ran the largest killing center of all time – Auschwitz. These officers of the Death’s Head, many of whom later served in frontline Waffen-SS units, were not the bureaucrats, who meticulously planned Adolf Hitler’s Final Solution from behind a desk in Berlin They were not those, who quietly scheduled the trains that carried the victims to the camps. Quite the contrary; these men stood on the front-line of the Nazi war to exterminate the Jews – they poured the gas pellets, they conducted the gruesome medical experiments at Buchenwald, they supervised the crematoria, they smelled the stench of death, they heard the screams, they ordered the guards to shoot.

They were The Camp Men – and they were at the heart of darkness. The photographic section of the book, with well over one hundred photographs – a large portion previously unpublished – is the largest collection of photographs of SS camp personnel ever to appear in one work. The images come from the extensive files of the United States Holocaust Memorial Museum, the Berlin Document Center, Yad Vashem and many other institutional collections. There are additionally photographs from private sources, including almost twenty rare pictures from the Gross-Rosen camp kommandant’s personal photograph album. Even the early camp officers are covered, such as those at Lichtenburg, Columbia Haus, Westerbork, Esterwegen and Papenburg, as well as the specialty camps as the women’s camp at Ravensbrück and the camp “corporate headquarters” at Oranienburg. 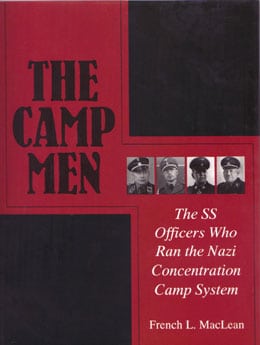 In addition to providing detailed biographical information on almost 1,000 SS officers that served in concentration camps, this book shatters myths. For decades after the war, and continuing today in some circles, the fable has remained alive that the SS personnel who served in the concentration camps were somehow different from their honorable brethren, who fought at the frontline in the Waffen-SS, in units such as the Leibstandarte, Das Reich and Wiking Divisions. Thus, those in the combat units have earned a pass from some historians, who believed the Paul Hausser story Soldaten wie andere auch (Soldiers Like Any Other.)

But Hausser was incorrect. As the Camp Men demonstrates with irrefutable proof from the official SS personnel file for each officer, almost half of the concentration camp officers (419) also served in Waffen-SS combat divisions. Sixteen fought in the Leibstandarte, 39 with the Das Reich, 159 with the Totenkopf (which explicitly was linked to the camp system,) 45 with the Wiking, 57 with the Nord Division and so on down the line. In fact, six former concentration camp officers actually served as division commanders in the Waffen-SS.

You may not have heard of Bochmann (although you probably have heard of Josef Mengele, who served in the Wiking Division, as well as at Auschwitz and Gross-Rosen.) You will be amazed at the information concerning age, birthplace, marital status, religion, Nazi Party members (almost 200 do not appear to have been party members at all), base profession (almost 350 doctors served at the camps) and what ultimately happened to these men (far too many escaped punishment.)

This is the book that librarians at the U.S. Holocaust Memorial and Museum Library start with to answer questions about SS officers, who served at the concentration camps. It is also the book at the National Archives, College Park, Maryland in the fourth floor microfilm room that assists researchers to find a particular SS Officer Personnel file.

Comments on The Camp Men

“The result of your meticulous – and surely not always easy – efforts of collecting and analyzing data has turned out impressive indeed…I intend to show visitors who come to my office your book – especially to the young people to tell them what happened in these camps.”

“It is a stunning book that I have spent hours poring over since it arrived.”

“…a welcome aid to staff and researchers.”

“The information that MacLean has compiled…has never been assembled in such a form and in such weight. ‘The Camp Men’ is a first-class research achievement and a large contribution to history.”

“I just couldn’t put it down!”

- Professor Emeritus David Wingate Pike American University of Paris, and author Spaniards in the Holocaust: Mauthausen, Horror on the Danube

“The book contains some fantastic photos.”

- Andrew Mollo Author of Uniforms of the SS

“If you could have only one book on the SS officers who served in the concentration camps in World War II, this is it.”

“…Obviously the product of painstaking research, and I am certain it shall prove to be a valuable tool for historians.”

Iconic Photo of the Selection Ramp at Auschwitz-Birkenau

Officers and Non-commissioned Officers at the Belzec Extermination Camp