This is the story of 150 of the most adventurous scouts, gold prospectors, gunslingers, buffalo hunters, and Civil War veterans of both sides—they may have been the deadliest collection of shooters to ever hit the trail.  This is the most detailed work ever produced on the obscure legend of the 1874 Yellowstone Wagon Road Prospecting Expedition in the Montana Territory—the product of multi-year research across the country, and visits to the three battlefields and expedition route of over 500 miles—an event that impacted the Little Bighorn in 1876.

Numerous legends of the West rode on the expedition, later playing key roles in the Great Sioux War of 1876.  Their adversaries now were the Lakota and Northern Cheyenne—some of the greatest light cavalry to ever gallop over the North American continent.  And watching their every move were Sitting Bull, Gall, Hump, Crazy Horse, and a renegade chief named Inkpaduta, ready to strike.

As part of the book are in-depth descriptions of three pitched battles between the wagon train and the Lakota/Northern Cheyenne warriors that hopefully will now be part of the lexicon of the Wild West:

The Battle of Rosebud Creek

The Battle of Lodge Grass Creek

The epilogue documents the re-creation of Jack Bean’s nearly one-mile shot against a single Lakota warrior that we attempted to duplicate at the exact location it occurred during the preparation of the book.

As a special feature, the book presents information that may link John “Liver-Eating” Johnston with the wagon train.

The expedition of about 150 prospectors, former Civil War soldiers, ex-Texas rangers, buffalo hunters and famed scouts, motivated by reports of possible gold fields – including the famed Lost Cabin Mine – had planned to travel down the Yellowstone River to the mouth of the Tongue River and then home – some 500 miles through some of the most inhospitable territory in the west.  It turned back at Rosebud Creek and on the return fought a final significant battle against some 1400 warriors under Sitting Bull at Lodge Grass Creek in April.

Richly supplied by the territory governor, the expedition went through a creative process to secure the two cannon and developed ingenious sources of ammunition for them.  The warriors, led by Hump, Inkpaduta, Crazy Horse and Sitting Bull, fought three pitched battles against the expedition; on one, John Anderson, a former slave in the south, fought an epic hand-to-hand knife fight against a warrior chief who may have been, although this is disputed, a son of Sitting Bull.  At the end of the battle at Lodge Grass Creek, famed buffalo hunter Jack Bean took his custom-made Sharps buffalo rifle and hit a lone warrior sniper on a high ridge roughly three-quarters to one mile away – with one shot – the longest rifle hit ever on a single target in the entire Wild West.

The expedition itself is one of the most obscure, but colorful episodes of the west.  As important, many of the participants, on both sides, later fought at the cataclysmic fight in 1876 at the Little Bighorn.  The book will discuss the possible lessons learned by Hump and Sitting Bull concerning the increase in accurate, concentrated firepower white frontiersmen brought to bear if they had an opportunity to dig even hasty rifle pits – the situation that developed on Reno Hill at the Little Bighorn after survivors of the Seventh Cavalry had a chance to dig in.  The book will discuss the impressions these key men took from the 1874 expedition and how they may have contributed to Custer’s defeat.

In 1993, Don Weibert wrote The 1874 Invasion of Montana: A Prelude to the Custer Disaster, the best previous source on the entire expedition.  He concentrated on a day-by-day account of the journey, and thus could devote only a few pages to the Lodge Grass fight.  Sitting Bull, Crazy Horse, Gold and Guns has a large chapter with many maps that focus on the five-hour Battle at Lodge Grass Creek (using modified satellite photos of the exact terrain that were not available in Don’s day), and will also present greater detail on the biographies of the men involved (again using a source not known 20 years ago, Ancestry.com,) as well as more information on the weapons used.

The book is organized in a similar manner to Custer’s Best: The Story of Company M, 7th Cavalry at the Little Bighorn in the respect that it discusses what happened to many of the participants in their later years and where many, such as Muggins Taylor and George Herendeen, are buried.

In addition to being a stand-alone tale of great bravery on both sides, Sitting Bull, Crazy Horse, Gold and Guns is an essential read to better understand what happened at the Little Bighorn in 1876 and how civilian scouts from the 1874 wagon train supported the army effort two years later. 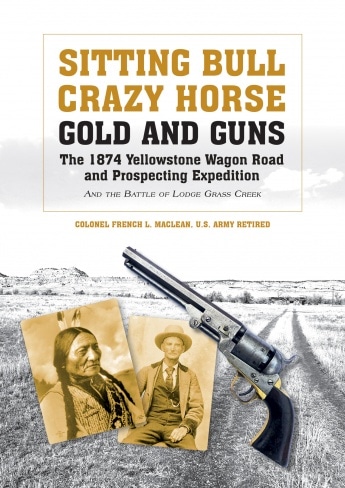