The SS Destruction of the Jewish Warsaw Ghetto April-May 1943

The twenty-eight day siege of the Warsaw Ghetto was one of the most protracted large-scale urban battles in World War II.  Only the fighting at Leningrad from 1941-1943, Stalingrad in 1942-1943, the Warsaw Rebellion of 1944, and Budapest in 1944-1945 lasted longer.  The Jews had resisted en masse and had created a legend that would transcend the war and continue even to this day.  Much has been written on this heroic struggle from the standpoint of the young men and women of the Jewish War Organization.  Nevertheless, a book from the German perspective has yet to be written that captures all aspects of the fight from the standpoint of the attackers – until now.  The Ghetto Men presents every fact possible concerning whom, when, with what and how the SS troops razed the Warsaw Ghetto.  The men and officers of the dreaded Security Service and Gestapo are here as well as the units, weapons and tactics, and a day-by-day analysis of the fighting.

The book is organized in nine chapters and six appendices, with an extensive bibliography, sections of photos, maps, and charts.  Chapter One includes material on establishing Warsaw as a concentration point for Jews, and conditions in the Ghetto.  Chapter Two details the “Operation Reinhard” deportations from Warsaw to the Belzec, Treblinka, and Sobibór extermination camps.  In Chapter Three, the beginning of the organization of resistance to the deportations in January 1943 is covered.  Chapter Four describes the wide variety of units of Germans and Ukrainian allies involved in operations in the Ghetto.  The fifth chapter is a day-by-day narrative of the actual battle in the Ghetto in April-May 1943, based on Jürgen Stroop’s after-action report – the “Stroop Report.”  Chapter Six is an in-depth discussion of the officers in the SS and units involved in the action.  Chapter Seven does the same thing with the enlisted men.  The final two chapters present conclusions and observations.  With a detailed map, the book details the procedures used by the Nazis to sort prisoners at the infamous Umschlagplatz. 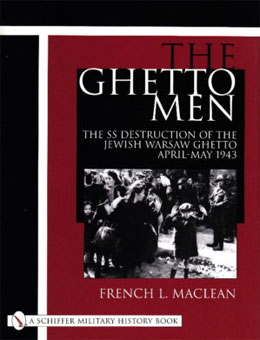 Over 110 photographs, 31 detailed maps of the fighting, 13 charts showing the organization of the various SS and Security Force units, 260 pages.  (Schiffer Publishing)

Comments on The Ghetto Men

“I have been very impressed with your book, ‘The Ghetto Men,’ and have found it an invaluable source on the fighting in the Ghetto.”

“With The Ghetto Men: The SS Destruction of the Jewish Warsaw Ghetto, French MacLean has once again shown himself to be a worthy successor to the mantle of such luminaries as Simon Wiesenthal and Gerald Reitlinger in bringing to life events in the Nazi campaign of terrorism and murder against those the regime decided were “unworthy of life,” and etching portraits of the individuals involved in carrying out the regime’s will.”

“…A very valuable one-volume resource for a lot of material not available elsewhere…the account of the German forces that fought in the Ghetto is unique…I also found the account of the battles, the maps and the picture compilation very useful in keeping track of the details of the story…so thank you!”

“Not many people have the knowledge to write as authoritatively on such a wide variety of subjects as you have done. Very impressive!”

Excerpt from The Ghetto Men

SS-Untersturmführer Herbert Schwarzenbacher served as the battalion commander for the detachment of Ukrainians known as the “Trawniki Men” who deployed from Trawniki to help quash the Ghetto Uprising.  He was born 3 January 1909 in Munich.  He joined the SS on 15 November 1932 with SS number 171669.  Schwarzenbacher also entered the Nazi Party on 1 May 1933 with Party number 1930269.  As an enlisted man, he was assigned to the SS and Police Leader in Lublin and served as a company commander at Trawniki in 1941.  He was promoted to SS-Untersturmführer on 31 January 1942 and assumed command of the 1st Guard Battalion at the camp.  He deployed the unit to Warsaw on 19 April 1943 and remained there until 19 June 1943.  That summer he appears to have served as the commandant of the SS Labor Camp Poniatowa as well.  On 9 November 1943, Schwarzenbacher received an Iron Cross 1st Class for his overall performance in “Operation Reinhard.”  Following his service in the General Government, Schwarzenbacher transferred with Odilo Globocnik to the Higher SS and Police Leader Adriatic Coast.  He was promoted to SS-Obersturmführer on 30 January 1944.  Again, he served as a guard battalion commander.  Schwarzenbacher was killed in action by partisans on 2 June 1944.  At 2000 hours that day, his vehicle was ambushed on the road from Senosecchia and Storje, near Trieste.  The casualty report in his personnel file states he was wounded in both legs and shot several times in the head, a classic case of partisans “finishing off” a wounded target.

Photo from the Stroop Report of the Jewish Warsaw Ghetto

SS Troops in the Warsaw Ghetto

On the Way to the Umschlagplatz at the Warsaw Ghetto

SS Troops Round Up Non-Combatants at Warsaw Ghetto

Captured Resistance Fighters by the Waffen-SS

Waffen-SS Burning Out the Resistance in the Warsaw Ghetto

SS and Ukrainian Soldier Guarding Jews at the Umschlagplatz

SS Officers with Half-Track at the Umschlagplatz