Waffen-Brigadeführer Bronislaw Vladislavovich Kaminski (in Russian: Бронисла́в Владисла́вович Ками́нский) was one of the most enigmatic figures in World War II.  He was born to a Polish landowner father and a Volks-German mother on June 16, 1899 in Vitebsk, then in the Russian Empire.  His later moved to Saint Petersburg, where he began his studies in chemical engineering at the Saint Petersburg Polytechnical University.  His studies were interrupted during the Russian Civil War, when Kaminski served in the “Red Army.”  After he was demobilized, Kaminski returned to the Polytechnical Institute., and after graduation worked at a paint factory as a chemical engineer.  During the Great Purge in the 1930s, Kaminski was accused of “belonging to a counter-revolutionary group,” arrested and imprisoned in 1937.  One source states that he also was accused of being a western spy and of belonging to the “Bucharin Group,” while another source indicates that his only “crime” was to cricize collectivization.  Kaminski began serving his ten-year sentence, first at a gulag near Chelyabinsk and later at a Sharashka-network distillery in the Bryansk region of Russia.  He was released from prison in 1941 and sent to the Lokot area, southeast of Bryansk, an area designated for persons after incarceration with no right to return to their previous places of living. 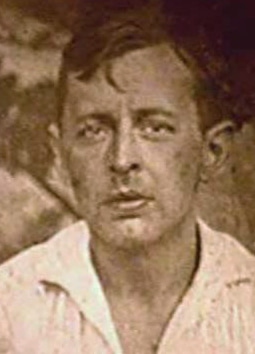 Reputed photo of Kaminski in his youth

The German military advance into Russia, termed Operation Barbarossa, reached the area of Lokot and Bryansk, on October 6, 1941.  The following month, a local technical schoolteacher Konstantin Voskoboinik, and Kaminski, then working as an engineer at a local alcohol plant, approached the German military administration with a proposal to assist the Germans in establishing a civil administration and local police of the area.  The Germans designated Voskoboinik as the Starosta of the “Lokot volost” and the head of the German-controlled local militia; they named Kaminski as his assistant.  Voskoboinik immediately founded the National Socialist Russian Workers’ Party.  That month the militia numbered no more than 200 men, with a mission of simply assisting the Germans in conducting their different activities, including numerous murders of the civil population, loyal or accused of loyalty to the Soviet authorities or to Soviet partisans.  The militia grew rapidly and by January 1942, it numbered 500 men.  Soviet partisan Alexander Saburov led a targeted attack on January 8, 1942, which killed Voskoboinik.  One source states that Kaminski had a hand in the assassination of his superior.  Kaminski then took over command of the expanding militia; local German personnel were delighted in the increase to 1,400 personnel, as the number of Soviet partisans in this area had been estimated as high as 20,000 that had effective control over almost the entire rear area of Army Group Center.

The commander of the German Second Army, Generaloberst Rudolf Schmidt, appointed Kaminski mayor of the Army Rear Area 532, centered on the town of Lokot.  Three months later, Kaminski received a degree of autonomy and nominal self-governing authority, under the supervision of Major von Veltheim and Colonel Karl Rübsam of the German Army. 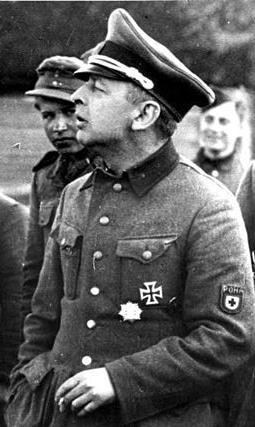 Kaminski was made the chief major of the Autonomous Administration of Lokot and the brigade commander of the local militia.  In this capacity, he administered the local government and established his own courts, jails and newspaper, encouraging private enterprise and abolishing collective farming.  From June 1942, Kaminski’s militia took part in the major action codenamed Operation Vogelsang.  In the autumn of 1942, Kaminski ordered a compulsory draft into the militia of able-bodied men in the area; he also boosted strength through Soviet prisoners of war from nearby Nazi POW camps.  By late 1942, the militia of the Lokot Autonomy had expanded to the size of a brigade (14 battalions), with 8,000 men under arms.  In the spring of 1943, Kaminski reorganized the brigade’s structure, which now consisted of five regiments with three battalions each, an anti-aircraft battalion and an armored unit.  He also created a separate guard battalion, increasing the brigade’s strength to an estimated 12,000 men.

In May and June 1943, the brigade took part, with other German security units, in Operation Zigeunerbaron.  It followed this by participating in Operation Freischütz, Operation Tannhaüser and Operation Seydlitz, all of which involved action against partisans, but also reprisal operations against the civilian population that harbored them.  However, the brigade began to suffer major desertions and partisans conducted several attempts on Kaminski’s life.  He narrowly avoided death each time, and executed all captured conspirators.  The failure of the German Operation Citadel forced the brigade, along with their families, to flee to the Lepel area of Vitebsk by the end of August 1943; the evacuation involved up to 30,000 people.  According to post-war Soviet estimates, up to 10,000 civilians were killed in the area in which Kaminski operated.  The Lepel area was overrun by partisans; Kaminski’s brigade was involved in heavy combat in this area for the rest of 1943.  During the retreat west, desertions from the brigade increased significantly to the point where the entire formation seemed close to disintegration.  When the commander of the Second Regiment, Major Tarasov, decided to join the partisans with his entire regiment, Kaminski flew to his headquarters and strangled Tarasov and eight other officers in front of the men, but 200 men in the regiment still deserted within the following two days.  By the beginning of October 1943, the brigade had lost two thirds of its personnel. 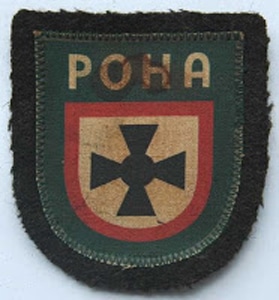 On January 27, 1944, Kaminski received the Iron Cross 2nd Class and the Iron Cross 1st  Class.  He also received the Bravery Medal for Eastern Peoples 1st Class in Silver with Swords.  Three weeks later, Kaminski issued an order to relocate the brigade and Lokot administration further west to the Dzyatlava area.  At this point, the brigade’s ranks were augmented with police forces from White Russia.  On March 1, 1944, the brigade was renamed Volksheer-Brigade Kaminski. It was subsequently attached to SS-Kampfgruppe von Gottberg and fought in anti-partisan Operation Regenschauer, Operation Frühlingsfest and Operation Kormoran.  During these operations, thousands of local civilians were shot as “suspected partisans” or deported as slave laborers.  Several thousand actual partisans were also killed.

In June 1944, the brigade was absorbed as a part of the Waffen-SS and renamed Waffen-Sturm-Brigade RONA (Russian National Liberation Army – Russkaya Osvoboditelnaya Narodnaya Armiya,) with Kaminski receiving the grade of Waffen-Brigadeführer und Generalmajor der SS, the only man with such rank.  As the result of Operation Bagration, the Soviet summer offensive, the anti-partisan activities of the brigade ceased and its personnel were assembled at the SS training camp at Neuhammer.  On July 31, 1944, Kaminski and his chief of staff reported to Rastenburg and met with Heinrich Himmler and Chief of Anti-Partisan Operations, SS-Obergruppenführer Erich von dem Bach.  The SS Main Headquarters in Berlin made plans to create a non-German SS Division, the 29. Waffen-Grenadier-Division der SS (russische Nr. 1), issuing the order on August 1, 1944.

However, the Warsaw Uprising started the same day.  To fight the massive uprising, Heinrich Himmler placed SS-Gruppenführer Heinz Reinefarth in charge of Kampfgruppe Reinefarth, a “pacification unit,” which consisted of the Kaminski unit along with the Dirlewanger Regiment and several other Ordnungspolizei and SS rear area units.  On August 4, 1944, one of Kaminski’s regiments was ready to deploy to the Polish capital, after Himmler personally requested Kaminski’s assistance.  The regiment formed a task force of 1,700 unmarried men, with four T-34 tanks, one SU-76 self-propelled assault gun and a few towed-artillery pieces) to Warsaw as a mixed regiment under command of Kaminski’s brigade chief-of-staff, SS-Sturmbannführer Yuri Frolov (Frolov later stated that the regiment had up to 1600 men, seven artillery pieces and four mortars.)

Kaminski gave his men permission to loot during the operation, and he personally did as well, collecting valuables stolen from civilian homes.  Kaminski’s unit lost all combat value.  Some 10,000 residents of the Ochota district of Warsaw were killed in several massacres, many murdered by Kaminski’s men, although Dirlewanger’s unit was no paragon of virtue in the same actions.  However, Kaminski’s four-day mass rape and murder at the Marie Skłodowska Curie Radium Institute, a cancer treatment facility, was one of the worst scenes of evil in the entire war.  German commanders decided that the brigade was too undisciplined and unreliable; in addition, some 500 men had been killed or wounded.  SS-Obergruppenführer Erich von dem Bach ordered Kaminski to depart Warsaw and report to Łódź to attend a conference; Kaminski apparently departed on August 26, 1944.

What happened next has never been fully resolved, although five explanations remain in various sources.  One historian posits that as soon as he arrived at Łódź (in German: Litzmannstadt), local Gestapo authorities (on orders from higher authority) arrested Bronislaw Kaminski and the same day executed Kaminski, his driver, chief of staff and the brigade surgeon with shots to the back of the neck by a Walther pistol.  A second author has written that the Łódź Gestapo arrested Kaminski and several staff members when they arrived in the city (again, on orders from higher authority); a military tribunal later tried and convicted Kaminski of stealing from the Reich (under the pretext that looted property belonged to the government, not the individual,) after which he was executed by a firing squad on October 4, 1944.  A third historical opinion, and the official German version concerning Kaminski’s death, is that Polish partisans ambushed and killed Kaminski and his chief of staff, Waffen-Obersturmbannführer Ilya Shavykin, twenty miles south of Warsaw, as he was enroute to the meeting at Łódź.  Kaminski’s men later demanded to see the ambush site.  After initially declining the request, German authorities made Kaminski’s staff car – replete with bullet holes and bloodstains – although authorities stated that the bodies were never found.  The fourth possibility that has been proposed is that after receiving the order to depart Warsaw, Kaminski realized its lethal nature and ordered his driver to head toward Tarnów, in southeastern Poland – not Łódź.  South of Tarnów, in the Carpathian Mountains, the Security Police (Sicherheitsdienst) apprehended Kaminski and killed him, making it appear that local partisans had dispatched the renegade leader.  The final account seems the most plausible.  It states that SS-Obergruppenführer Erich von dem Bach notified SS authorities in Łódź, soon after Kaminski’s departure on August 26, to arrest Kaminski and his traveling companions as soon as they arrived later that day.  He instructed that the SS commander there convene a court-martial and try Kaminski for the crimes listed above.  The court-martial did just that and after finding Kaminski and his associates guilty and sentencing them to death, turned them over to the Gestapo.  Two days later, on August 28, 1944, Gestapo officers went to the detention cells holding the condemned men and executed them.

According to this most-likely scenario, Gestapo authorities buried the four bodies on the grounds of the Gestapo Headquarters at 1 Limanowskiego Street on August 28, 1944.  Fearing discovery of the remains, the Gestapo exhumed the bodies in the following day or two, took the four corpses to a nearby woods and burned them.  If this scenario is correct, it is very likely that the chief of the Sicherheitsdienst in Łódź, SS-Obersturmbannführer Dr. Otto Bradfisch had a direct role in the execution of Bronislaw Kaminski and the subsequent destruction of his remains.