In no other battle does the imagination of tank-on-tank combat take such glorious flight than at Kursk, Unternehmen Zitadelle, (Operation Citadel) in July 1943.  Lasting but eleven days, “The Greatest Tank Battle in History” has been used to describe the armored onslaught, while “The Death Ride of the Fourth Panzer Army” a description of the southern-half of the fight, continues to evoke Wagnerian images of Wotan, Siegfried, and the Valkyries.

And what of the formidable German Tiger tanks at Kursk?  Soviet daily battle accounts claimed destruction of more Tigers than were physically present – surprisingly only 120 of the behemoths.  The 2nd SS Panzer Corps, of the dreaded Waffen-SS, the main effort for much of the southern attack and the scope of this book, crossed the line of departure on July 5 with just 35 operational Tigers.

But this book is not focused on those few machines.  It is focused on men because any tank is only as good as its crew.  The SS men who fought in these Tigers were not ten feet tall, although the Russians may have believed that during those few days that the Tigers shook the earth.

No, these men were far more ferocious than huge physical goliaths.

These soldiers had no concept of defeat. 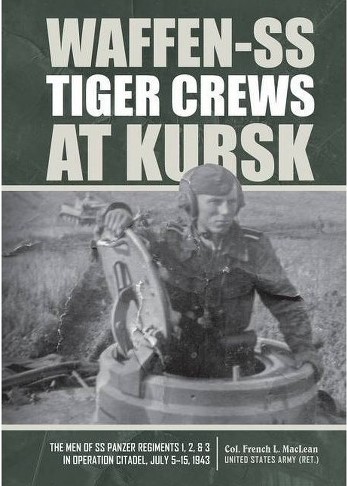 This easy-to-read, meticulously-sourced from German, British and U.S. sources – including experts and family members of the soldiers – not only provide fascinating biographies of most of the SS Tiger crewmen at the battle, but also finally addresses the questions that Tiger aficionados have posed for decades.

Why was the Kursk offensive delayed for several months?  Who supported it and who was against it?

How many crewmen had prior combat experience?  Why were so many previously infantrymen?  Were a significant number of crewmen back in Germany training and thus missed the battle?  What happened to these men – those who survived – after the war?

How deadly was the battle for Tiger crewmen?  How many were wounded or killed?

How many Tigers were operational each day of the offensive?  How many were totally destroyed?  What types of Soviet weapons destroyed or damaged Tigers?  How far did each company advance every day and what combat did they experience.

What was the “Achilles Heel” of the 2nd SS Panzer Corps at Kursk?

To what degree did the Tiger crewmen believe that they were winning the battle?

Early in the war the German Army established a Panzer Branch to help coordinate the development of equipment, organization, training, and assignment of personnel for panzer units.  The Waffen-SS never did.  What were the ramifications of this decision at Kursk?

How did Waffen-SS Tiger crewmen at Kursk use their panzers as defacto sensors to help develop their own combat decision-making cycle?

The Tiger crewmen weren’t saints and almost every one of them was directly involved in the killing of enemy soldiers – that was their job.  They did not like every superior in their chain of command, although they revered some; and they may have thought that the decision-makers back in Berlin had no idea of what was going on at the front – which of course, many of them in cushy jobs on Prinz-Albrecht-Straße (the location of the SS headquarters in Berlin) did not.  When wounded, they tried to remain with their company because they knew if they did not, it would be difficult to ever return to their comrades and they would be assigned somewhere else.

However, they also were not “soldiers like any other” as Paul Hausser opined.  They were not the best soldiers in World War II – not by a long shot.  But they probably were the best disciplined as far as carrying out the orders of their superiors.  When those orders were evil, because these soldiers had been indoctrinated for over a decade concerning all facets of life, too many just followed those commands and subsequently paid the price.

But when those orders were typical combat instructions to attack a prepared, dug-in, superior-sized force such as in those eleven days in July 1943, they – in their awesome Tiger tanks utilizing a superior combat decision-making cycle – made everyone aware of exactly where Kursk was, and forced every Soviet T-34 tank crew on that battlefield to fear an increased level of battle ferocity that led many of the enemy to panic, which resulted in their destruction.

For those 264 hours at Belgorod, Beresov, Bykovka, Ivanovka, Klyuchi and Prokhorovka, the SS Tiger crews were on the hunt.  They were indeed as strong as Krupp steel.  The arithmetic of the battlefield – the force ratios and Lanchester laws for calculating the relative strengths of opposing forces – gave them no chance to win.  But, still, they had no concept of defeat because they were individuals fighting side-by-side with and for their friends, not as robots programmed by a cold, vicious ideology to be supermen, and for these reasons there is much to be learned from them.