World War II was the most devastating war in all of history. Millions of soldiers of both sides were killed in action; tens of millions of civilians (either deliberately or inadvertently) were killed as well. Most military casualties were suffered by lower ranking enlisted personnel, frequently simple, but courageous infantry soldiers.

However, many general officers died as well. Direct combat, illness, suicide, executions and accidents claimed leaders from every combatant nation. But in no country were these losses as large or their impact severe as in Germany, where over 600 died. This work primarily examines the approximately 150 division, corps and army commanders, who were killed in action or died of wounds received in action. Some, who died in front-line related accidents, will also be examined, as will some general officer suicides that occurred at the front as well.

Many aspects of the German war machine were truly revolutionary in concept, equipment and scope – and were truly 20th century in characteristics. However, German general officer casualties seemed almost a throwback to earlier warfare, where combat commanders led and often died in the most forward of battle formations. And equally as often, it seems as if these significant losses were almost self-inflicted. German Army doctrine demanded that senior leaders be forward with the troops; many general officers were in actuality products of the First World War in their attitude toward lethality (i.e., what could kill them and what probably would not), and the officer rotation system frequently sent general officer replacements into action with inadequate survival training. 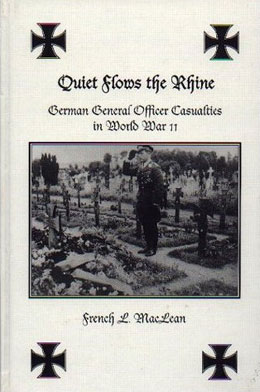 So if you did not know that -

– You may want to get this handy little book that is full of interesting information.

Comments on Quiet Flows the Rhine

“…A most valuable study of the German Army in the Second World War, which I guard with care in my study.”

- Sir John Keegan Royal Society of Literature historian, author of The First World War, The Face of Battle, Six Armies in Normandy, A History of Warfare, and The Mask of Command

“A meticulous, unusual, and highly enlightening study that offers exceptional insight into life and death within the German general officer ranks during World War II. French L. MacLean is a first-rate historian, and he has written a first-rate book that should interest specialists and general readers alike.”