The Story of Company M, 7th Cavalry at the Little Bighorn

This is the story of George Custer’s best cavalry company at the Battle of the Little Bighorn – Company M. With a tragically-flawed, but extremely brave, Company Commander and a no-nonsense First Sergeant, Company M maintained a disciplined withdrawal from the skirmish line, saving Major Marcus Reno’s entire detachment from annihilation. After the battle, when Captain Thomas French submitted his entire company for awards to Frederick Benteen, his senior, Benteen – aghast at the effrontery of such a request – asked the company commander for clarification and received French’s historic retort: “All or none.”

The inside story George Custer’s best cavalry company at the Little Bighorn.

In 1870, two Company M troopers got in a bar-fight in Kansas with the legendary “Wild Bill” Hickok, who killed one and seriously wounded the other; Hickok then skedaddled out of town before the rest of the company could return and take vengeance.

In 1874, the Company M blacksmith shoed government scout “Lonesome Charlie” Reynolds’ horse backward, so when the trailblazer rode alone through 90 miles of hostile territory with news of gold discovered in the Black Hills, enemy warriors could not track him.

In April 1876, Company M’s first sergeant, a Civil War veteran of Fredericksburg and Gettysburg, was court-martialed for hanging a private by his wrists off the ground with a leather strap and busted to private himself, but was restored to his rank days before the Little Bighorn campaign.

In 1876, two Company M troopers, after the campaign, deserted to prospect for gold in the Black Hills and Alaska.

A year after the battle, one Company M trooper shot and killed another during a poker game at Montana Bill’s Ranch.

The Company M commander and the first sergeant had perhaps the most accurate weapons of the entire regiment and were deadly shots.

A Company M trooper, nicknamed “Crazy Jim,” was so wild that he killed, skinned and ate rattlesnakes; and then wore the skins around his neck!

In the heat of the battle, one Company M trooper mistook a friendly Arikara Indian Scout for a Lakota warrior and shot him in the wrist.

A Company M trooper, carrying water for his wounded comrades on Reno Hill, told a captain from another company to “Go to Hell,” when the officer asked for a drink.

No members of Company M received the Medal of Honor, when at least ten troopers deserved the decoration.

The unpublished diary of one of Company M’s sergeants, obtained by a researcher three years after the soldier’s death, revealed that many of the officers in Reno’s detachment were drunk from almost the start of the battle. 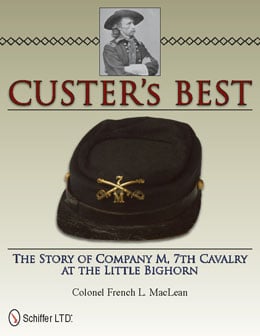 “Your detailed account of Company M thoughtfully dissects the myths associated with the Battle of the Little Bighorn, while highlighting the bravery of the Soldiers that survived those tough Days. The story you told of Company M, 7th Cavalry – the unvarnished truth of heroism, tragedy and personal strife – a good read for any professional Soldier.”

“I’ve read through your Custer’s Best. You have made a great contribution to Custer literature. You did a monumental job of research and you should be very proud of your contribution to the Custer story. Your history of M Troop at the Little Big Horn goes into every detail of “Custer’s Best” and is most commendable.”

“This is truly a monumental work that deserves a place in your personal library. MacLean’s book is one of the most solidly researched and moving accounts of one company in Custer’s command that is destined to become one of the classic books of the Indian Wars.”

“Damn you, French MacLean. I opened the mailer with your book, Custer’s Best, at noon yesterday. I put it down at 3:00 p.m. and only got to Chapter Two. Mrs. Johnson will have my ass for not doing my chores. The dogs are pissed because they didn’t get their walk.”

“The only thing I did not like about this book was that it ended. I never wanted it to stop.”

Map of the Battle Showing the Defense at Reno Hill