“In his first novel, A Garden of Sand, Earl Thompson wrote of Depression-era Kansas in the 1930s.  At one point in the story, he described the inside of a truck-stop, where a young man often fantasizes about doing something bigger with his life than his friends – being a part of something bigger than himself.  Above the jukebox in the old café is an Anheuser-Busch Brewing Company print depicting Custer’s Last Stand, at which point Thompson’s story continues, describing the Americana masterpiece:

“It was a great picture with ponies wild-eyed and frothing in the dust of battle, ridden by howling Indians in warpaint, dropping, dragging, dying like flies, all over it.  And Custer, his hair like golden flypapers, golden mustachios, great white hat, fringed buckskin jacket, supported dying troopers around his knees, his pearl-handled six-guns blazing, mowing down Indians as if they were wheat.  That dusty golden land was of the world and the boy knew.  He lived where Indians had walked.  Where buffalo grazed.  Listen!  For the silent step.  He could look at the picture for hours.  Nuts to Western Union!  When he grew up, he was going with the cavalry.”” 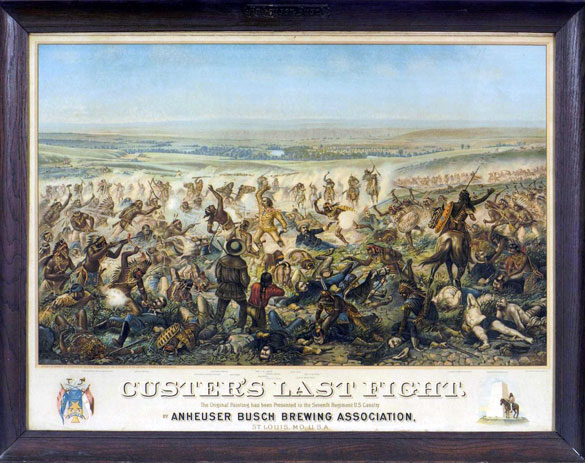