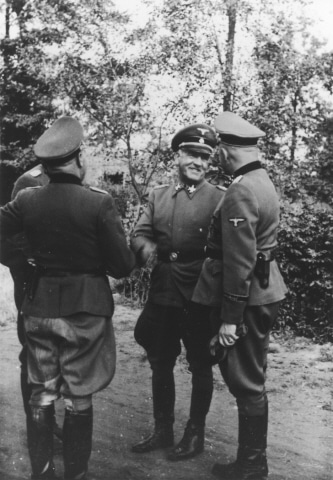 SS-Obergruppenführer Oswald Pohl, center, visits Auschwitz in late 1944.  Officer to the right, with his back to the photographer, is Auschwitz Commandant SS-Sturmbannführer Richard Baer.  Taking the photograph is SS-Obersturmbannführer Karl Hoecker.  Pohl was hanged a few minutes after midnight on June 7, 1951 at Landsberg Military Prison at Landsberg am Lech.  Baer had been arrested in West Germany in December 1960, and died of a heart attack in pre-trial detention in 1963.