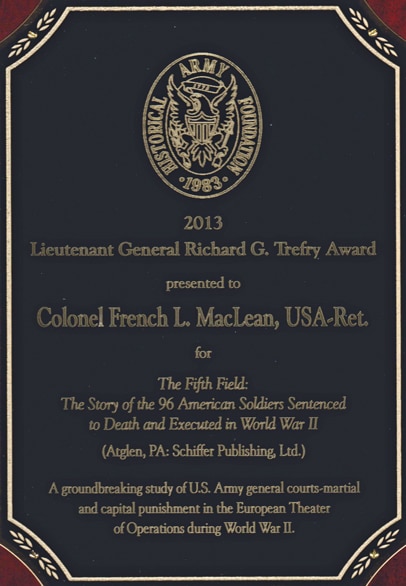 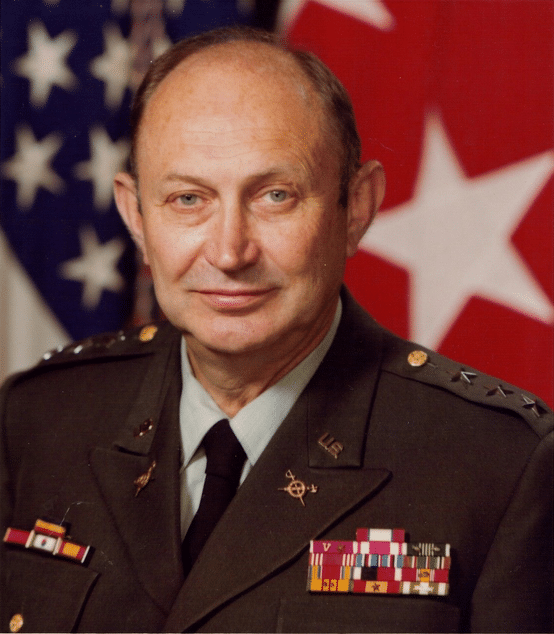 (June 18, 2014)  The Army Historical Foundation has recognized two authors for 2013 with the Lieutenant General Richard G. Trefry Award for their contributions to the literature on the history of the U.S. Army.  Colonel French L. MacLean was honored for his book, The Fifth Field:  The Story of 96 American Soldiers Sentenced to Death and Executed in Europe and North Africa in World War II (Atglen, PA:  Schiffer Publishing, Ltd.).  Rick Atkinson was recognized for his highly praised Liberation Trilogy, consisting of the books An Army at Dawn:  The War in North Africa, 1942-1943; The Day of Battle:  The War in Sicily and Italy, 1943-1944; and The Guns at Last Light:  The War in Western Europe, 1944-1945 (New York:  Henry Holt), on the U.S. Army in North Africa and Europe in World War II.

Lieutenant General Richard G. Trefry, who had served as an enlisted man in World War II, retired from the U.S. Army after 33 years of active duty.  He served as the Inspector General of the U.S. Army for six years under three Chiefs of Staff and Secretaries of the Army, revolutionizing the Army’s approach to the Annual Inspector General Inspection by transforming it from a compliance event into an inspection that identified and corrected systemic failings that inevitably led to recurring deficiencies and interfered with the ability of unit commanders to accomplish their missions.  After retirement, General Trefry served in the White House as the Military Assistant to the President of the United States, directing the White House Military Office during Operation Desert Shield/Desert Storm, as a military advisor to President George H. W. Bush.

In 1995, General Trefry served on the Board of Directors of American Military University and today, continues to serve on the Board of Trustees of the American Public University System as a member and committee chair.  In addition, he has served as a Senior Fellow for the Institute for Land Warfare in the Association of the U.S. Army and is Program Manager of the Army Force Management School at Fort Belvoir, Virginia.  General Trefry teaches and speaks frequently at service schools, public and private organizations, and at public and private schools and colleges.  In 2009, the Secretary of the Army established the Lieutenant General Richard G. Trefry Lifetime of Service Award, honoring Lieutenant General Trefry’s extraordinary achievement and service to the Army, the Department of Defense, the Federal Government, and our Nation.

His presentation on “How the Army Runs” has become legendary in military circles in explaining the Constitutional and legal underpinnings of what the Army has and what the Army does.

He had this to say about The Fifth Field:

“I couldn’t put it down… a hell of a good book…the subject is fascinating… you have done yeoman’s work and produced a great book.”

“I had been an enlisted man in World War II and knew that soldiers had been executed, but I did not know how many.  Later, when I was the Inspector General of the United States Army, I was visiting the American Military Cemetery in Luxembourg about 1980.  As I looked at the crosses, I wondered where the soldiers who were executed were buried.  Now, I finally know.”