The Wisdom of Crowds 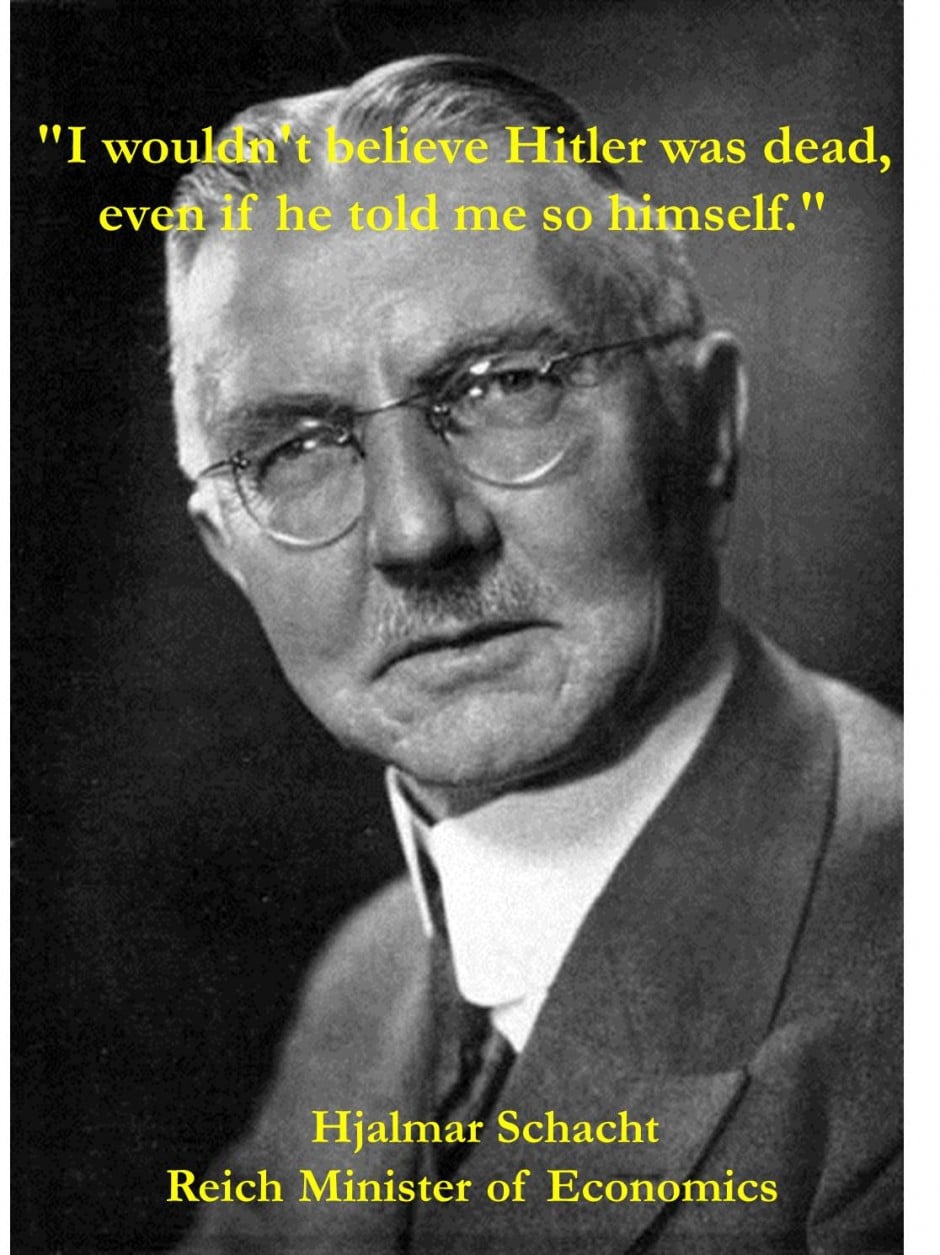 Read this carefully, because I really need your help in proving or disproving a historical mystery, and after you think about what you have read I would ask you to email me with your opinions.

My interest in World War II probably began at age five and since then, especially concerning the war in Europe, I have tried to read book after book on this subject that has been printed in English or German.  After five decades and at least 1,000 books read, I was pretty comfortable that I understood how the war unfolded and the general ground truth of what happened.

Within the last two years, however, something has changed with the publication of the book Grey Wolf: The Escape of Adolf Hitler, and last fall the appearance on the History Channel of the series Hunting Hitler.  Until these two events, I would have mortgaged the house, sold the dog, taken a second job and wagered every dollar I had, or would ever make in the future, on the premise that Adolf Hitler committed suicide in Berlin on or about April 30, 1945.  That event was a given in World War II history and was supported by a mountain of indicators.

Now, while I still freely admit that the mountain of indicators is still there, this little, itty-bitty voice of doubt has crept into some historical recess of my mind that is now saying, “Not so fast.”

Let’s do a quick review of established history.  The Soviet Army advanced through Poland and was in an operational pause along the Oder River, just east of Berlin.  On April 16, 1945, they launched their attack to take the German capital, concentrating their forces to break through in the Seelow Heights area.  After two days of bitter fighting, the Soviets broke through the German defenses and advanced toward Berlin, while at the same time sending attack wings north and south of the city so as to encircle it.   By April 23 April, Berlin was fully encircled and the Battle for Berlin entered its final stage.  Hitler decided to die in Berlin, while many or his subordinates attempted to escape over the next eight days.  During the last 49 hours of his life, Adolf Hitler married his long-time mistress Eva Braun, dictated his final will and testament and made preparations for his death.  The two committed suicide about 3:30 pm on April 30, 1945.  SS personnel took the bodies of both people outside the bunker, where they attempted to burn them beyond recognition.  A general breakout from the bunker occurred the next day, with some personnel escaping the Red Army, but with most killed or captured.

Grey Wolf, and since I first read it I have discovered that several investigative reporters and historians in South America have come to the same conclusion – one even stating that some of the work in the book was his own – presents a detailed account of how the Nazis amassed a fortune in Argentina and paid off several highly-placed Argentinian leaders to not only look the other way, but to actively assist those Nazis that escaped to their country after the war.  The non-fiction work then goes into detail on how Hitler – and Eva Braun – escaped.  It gives names of those assisting in the effort, presents the most-likely path of escape, tells of the exact U-boat that ferried the Führer across the Atlantic, describes Hitler’s life in the South American country and presents a descript of the Nazi leader’s last days.  More incredibly – if that is possible – the work tells how Eva soured on her husband and how she and their two children left the unstable dictator.  In short, Grey Wolf tried to answer the question: Did Hitler, code name “Grey Wolf”, really die in Berlin in 1945?

Then last fall, History Channel introduced their series Hunting Hitler, which not only had one of the authors of Grey Wolf on its investigation team, but was also staffed by several other accomplished experts and led by former CIA case officer and author Robert “Bob” Baer.  Here was a “heavy-hitter”, a graduate of the Edmund A. Walsh School of Foreign Service at Georgetown, an intelligence columnist for Time Magazine and a consultant on intelligence issues and subjects for CNN.  Mr. Baer simply is not the type of professional who would support a fraudulent effort to answer a legitimate question, because his reputation is his stock in trade.  After watching every episode of the series, my conclusion was that Hitler and Braun could have escaped from Berlin; the short series simply did not have the time or focus to get me to a conclusion that they did escape.

There are now rumblings that there may be a second year for the series, and it may be wise to turn to a new method of analysis to try and prove or disprove this potentially history-shaking subject – the wisdom of the crowd.  This information-gathering and decision-making tool rests on the conclusion that the collective opinion of a group of individuals is more accurate and prescient than that of a single expert.  Behavioral scientists have found time after time that a large group’s aggregated answers to questions involving quantity estimation, general knowledge and many types of reasoning is as good as – and often better than – the conclusion arrived at by any single individual within the group, no matter their education or specialty.  This is also the basis of our jury system and how 12 jurors can come up with the correct verdict.

The readers on this website are real thinkers, as their emails to me indicate all the time.  So if you are reading this post, I would like you to think about your answer to the following question:

What would History Channel in the second year of their series Hunting Hitler have to show you for you to conclude that Adolf Hitler probably did not die in Berlin in 1945 and instead escaped to South America?

To help you organize your thoughts let me offer some “baskets” of proof that you could consider – but if you have something else, please develop that.  The goal of this post is to have you send me an email (go to contact the author) and let me hear the wisdom of the reading group and I will try and get that to the creators of the series.

Basket 1 – Witness Statements.  This might include Argentinians who believe they saw Hitler in Argentina after the war.  How many different witnesses would cause you to believe their conclusions?  What if one or more of the U-boat crewmen that reportedly took Hitler to South America was still alive and made a statement on camera to that effect?  Would it take more than one of these sailors to convince you?

Basket 2 – Photographs.  If any photographs of Hitler were shown, and were verified by photo experts to have been taken in the 1940s or 1950s, and a forensic expert was able to superimpose them on known photographs to get a percentage of match, how would that affect your opinion?

Basket 3 – Remains or DNA.  I am not sure if anyone has DNA that is known to be Hitler’s or someone in his family, as DNA was not a known tool back then for identification.  What are your observations concerning the use of DNA.  Additionally, if the investigators found what they believe are the remains of Hitler, how would you want that presentation to be handled: a dental records comparison, etc.?

Basket 4 – Eva Braun and the supposed children.  Even if Hitler did escape, he would be long dead by now and Eva Braun would most likely be dead unless she was over 100 years old.  But if the couple indeed had children, those individuals could still be alive.  What evidence concerning them would you like to see?  If the investigators find a gravestone in a secluded cemetery for Eva Braun and the burial records show the person was born in Munich on the same day that the famous Eva was, what does that do to the little voice in your head?

Basket 5 – Something else.  No matter how crazy it may sound, let me hear it!

Basket 6 – This is the “I ain’t buying anything they find or show.”  That is important to know as well as it shows a would-be writer or producer the magnitude of the challenge he or she must overcome to change a historical opinion that has been sort of set in concrete for over 70 years.

So please think about the essential question, Did Hitler really die in Berlin in 1945?  Think about what level of evidence or proof you need to answer this in the negative, if that can be done at all.

And then please write me with your thoughts!