Upon arriving at West Point in the summer of 1970, the question every new cadet tacitly pondered was whether they would serve in Vietnam at some point during their time in service.  The country was deeply divided over the war, and nationwide anti-war demonstrations came to a tragic climax with the killing of four and wounding of nine other unarmed Kent State University students by the Ohio National Guard on May 4, 1970.  Despite division over the war, 1377 new cadets entered the Academy out of over 6,000 applicants.  On his way to perform for the troops in Vietnam, Bob Hope and his entourage, stopped at West Point on December 15, 1970, for a special Christmas show.  And on May 29, 1971, President Nixon visited the academy with a message of assurance that no graduates from the Class of 1974 would be deployed to Vietnam, although this news was a little late for our future First Captain Jack Pattison, who had fought on Hamburger Hill in that conflict before attending the Prep School and subsequently West Point. 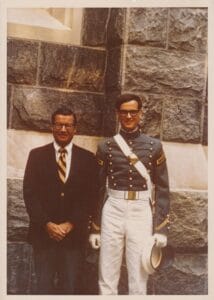 French & Dad at Graduation; it had been a LONG way from Summer School for Chemistry

While most of the class members were on summer leave, a few to summer school, army orientation training, or airborne school, a federal appeals court ruled on June 30, 1972, that mandatory chapel was unconstitutional, thus ending a years-long tradition at West Point.  On July 1, 1973, President Nixon fulfilled a re-election promise by ending the draft and ushering in the era of an all-volunteer army.  Distinguished scholars among the 833 graduates included Andrew Green and Thomas Downar recognized with the Hertz Foundation Award; Dwight Helton and Willis Marti awarded the National Science Foundation Graduate Research Fellowship; Kerry Pierce awarded the Rhodes Scholarship; and Michael Reopel awarded a White House Fellowship. 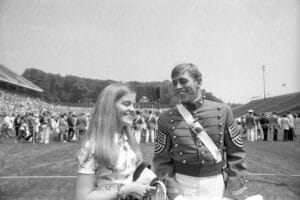 Dave Petraeus and fiancée at graduation

The Class of 1974 entered a peacetime Army divided between draftees and enlistees who served in Vietnam, and volunteers who had no combat experience.  Graduates were immediately challenged to address post-war issues such as low morale, racial tensions, and unit readiness as the Army transitioned from the Vietnam war to more defensive missions in Western Europe and South Korea.  The class also provided exemplary leadership regarding the integration and development of women into combat support units.  Missions and training broadened to include desert warfare in anticipation of conflicts in the Middle East. 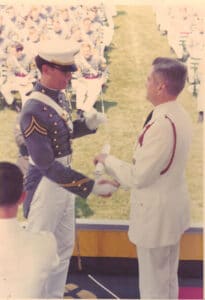 Receiving Diploma from Superintendent, Lieutenant General William Knowlton. The “Supe” was probably more surprised than I was!

Members of the Class of 1974 served in assignments around the globe and played a key role in providing frontline combat leadership in the Gulf War (1990-1991), the Iraq War (2003-2011), and the Global War on Terror.  No members of the Class were killed in action or died while in captivity.  Twenty-five members of the Class became General Officers, including four 4-star generals, three 3-star, eleven 2-star, and seven 1-star.  Completing over forty years of active service, GEN Martin “Marty” Dempsey served as the 18th Chairman of the Joint Chiefs of Staff from October 1, 2011, until September 25, 2015.  GEN Keith Alexander, serving in the United States Army for nearly forty years, served as director of the National Security Agency, chief of the Central Security Service, and commander of the United States Cyber Command.  GEN David “Dave” Petraeus served as Director of the Central Intelligence Agency after serving 37 years in the United States Army.  Highlighting nearly thirty-seven years of service in the United States Army, GEN Walter “Skip” Sharp last served as the Commander, United Nations Command, Commander, ROK-US Combined Forces Command and Commander, U.S. Forces Korea.  After retiring as a Colonel, Matthew S. “Matt” Klimow (who was Keith Alexander’s roommate at West Point) went into the U. S. State Department; his career there culminated as the U.S. Ambassador to Turkmenistan.  Keith Alexander, Marty Dempsey, and Skip Sharp were each awarded the USMA Distinguished Graduate Award in 2016, 2017, and 2019, respectively.