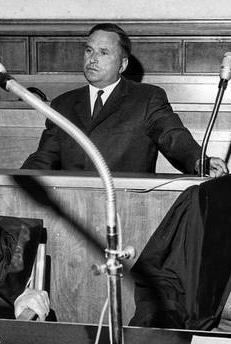 Dr. Albert Widmann on trial after the war

SS-Sturmbannführer Dr. Albert Widmann, the son of a railroad engineer, was born in Stuttgart, Germany on June 8, 1912.  Studying at the Stuttgart Technical Institute, he received his doctorate in chemical engineering in 1938.  The year before he graduated, Widmann joined the Nazi Party.   After his schooling, Albert Widmann found himself employed with the Technical Institute for the Detection of Crime, a forensic laboratory.  By 1940, he had risen to be the institute’s chief of the section for chemical analysis.  By that time, Widmann was also a member of the SS, holding the rank of SS-Untersturmführer.

Widmann’s section provided technical advice to the Nazi T4 Euthanasia Program.  He took part in the early discussions about killing methods, participated in the first carbon monoxide gassing experiment at the Brandenburg State Hospital and Nursing Home, and through the institute, obtained the necessary carbon monoxide gas and poisons for T4.  He also obtained and provided the lethal chemicals used in fatal injections in the children’s euthanasia program, sharing shared his technological knowledge with others in the T4 program that were in charge of supervising and administrating the program.  Widmann visited other T4 centers, when solutions to technical problems needed to be tested, such as, when the crematorium in Sonnenstein Euthanasia Center malfunctioned.

In Russia, Dr. Widmann and Arthur Nebe conducted an experiment using explosives as the killing agent.  They locked 25 mentally ill patients in two bunkers in a forest outside of Minsk.  The first explosion did not kill every victim and it took so much time preparing the second explosive charge that the results were deemed unsatisfactory.  Several days later, they conducted an experiment with poison gas in Mogilev.  SS personnel hermetically sealed a room with twenty to thirty of the insane patients in the local lunatic asylum.  Two pipes were then driven into the wall and attached by Dr. Widmann to the exhaust pipe of a car parked outside.  A driver turned the car engine on and Widmann ensured that the exhaust began seeping into the room.  However, after eight minutes, the people in the room were still alive.  A second car was connected to the second pipe and through simultaneous operation, and a few minutes later, all those in the room were dead.

Widmann reportedly conducted other experiments back in Germany at the Sachsenhausen concentration camp, along with Dr. Joachim Mrugowsky, concerning testing poisoned ammunition on prisoners – most of the tests ended in death.

After the war, Dr. Albert Widmann fled Berlin to Austria and finally returned to Stuttgart.  He took a job with a paint company and ended up as the chief chemist.  Widmann avoided prosecution until 1959.  He served only six years and six months in jail for his crimes.  Dr. Albert Widmann died in Stammheim on December 24, 1986.