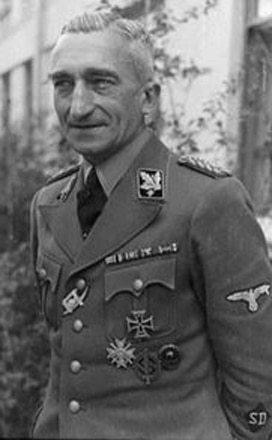 SS-Gruppenführer Arthur Nebe served as the commanding officer of Einsatzgruppe B in Russia, although that was not his most-important function in the Third Reich.

Born in Berlin on November 13, 1894 to an elementary school teacher, he graduated from the Leibniz-Gymnasium in Berlin (high school) and served in the 17th Pioneer Battalion, a combat engineer organization in World War I.  At the front, he was wounded twice by poison gas and was awarded the Iron Cross 1st Class.

After the war, in 1920, Nebe joined Berlin’s detective force, the Kriminalpolizei (Criminal Police), called Kripo for short.  By 1924, he had advanced to the rank of Police Commissioner; that year he married Elise Schaeffer – the couple had one daughter two years later.  In 1928, he assumed responsibility for the Kripo offices in Potsdam and Frankfurt an der Oder, where he investigated numerous narcotics and murder cases.  Nebe joined the Nazi Party on July 1, 1931.

In 1932, Nebe helped form the National Socialist Civil Service Society of the Berlin Police and became friends with Kurt Daluege, a police official and prominent Nazi.  Daluege recommended that Nebe be appointed the Chief Executive of the State Police.  In July 1936, the Kripo became the criminal police department for the entire Third Reich.  It was merged, along with the Gestapo into the Security Police under Reinhard Heydrich.

Arthur Nebe, who formally entered the SS on December 2, 1936, was promoted to SS-Gruppenführer and appointed head of the entire Kripo, making him a direct subordinate of Heydrich.  Evidence shows that about this time, Nebe began to dislike the methods of Himmler and Heydrich, although he continued to have lunch with them frequently.

By 1938, Nebe’s dislike turned to hostility and he joined anti-Nazi conspirators Dr. Karl Sack and Hans Oster.  Nebe provided information on SS forces to the conspirators involved in the September 1938 coup attempt, a plan to overthrow Hitler if Germany went to war with Czechoslovakia.  However, Britain and France caved in to Hitler’s demands and there was no war over Czechoslovakia.

In 1941, perhaps sensing some reluctance on the part of his subordinate to get his hands dirty, Reinhard Heydrich selected Nebe to command Einsatzgruppe B, which would follow the Wehrmacht’s Army Group Center in the invasion of the Soviet Union.  Nebe asked for a transfer to the International Police Commission to avoid this duty, but Heydrich insisted; anti-Nazis Ludwig Beck and Hans Oster urged Nebe to accept, so they would have direct evidence of SS crimes and organization.  During Nebe’s tenure in the east, Einsatzgruppe B murdered about 46,000 victims.  With the technical assistance of Dr. Albert Widmann, Nebe experimented with the use of explosives and carbon monoxide gas vans (used to suffocate victims) to kill the mentally defective in lunatic asylums in Minsk and Mogilev, to spare his men the anxiety of shooting them.

Nebe served in Russia from June to November 1941, returning to Berlin to command the Kripo once again.  In March 1944, after the mass escape of Allied prisoners of war from Stalag Luft III, Nebe helped select fifty re-captured prisoners for execution.  He also reportedly suggested in June 1944 to SS physician Dr. Ernst Grawitz that the Gypsies held at Auschwitz would be good patients for medical experiments at Dachau.

Arthur Nebe appears to have been on the fringe of the July 20, 1944 bomb plot to kill Hitler at Rastenburg.  Supposedly, his mission in the plot was to lead a team of twelve police officers to assassinate Heinrich Himmler, but his whereabouts on the day remain in question (He may have been in Berlin with conspirator General Paul von Hase) as does the method by which he was to have received the signal to act.

In any case, Nebe – using various disguises after a warrant was issued for his arrest on July 24 – fled into hiding.  There are many versions of what happened next; one of the most logical is that Nebe contacted a female acquaintance in the police, one Adelheid Gobbin at the end of July, requesting help.  She took him to her apartment and then arranged a hiding place with the Walter Frick family at Motzen on Lake Motzen, twenty miles south of Berlin.  Gestapo investigator Willy Litzenberg appears to have tracked Gobbin down in January 1945 and in a later interrogation, she revealed Nebe’s hiding place.  Nebe, who according to one source attempted to fake his own suicide in January, was arrested in February 1945 and sentenced to death by the People’s Court.

On March 21, 1945, executioners at Plötzensee Prison in Berlin hanged Arthur Nebe (and Walter Frick.)  After the war, there were reports that he had been sighted in Turin, Italy and Ireland, but nothing has ever confirmed that he survived the war.