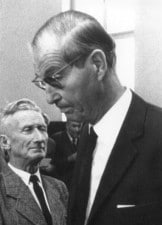 Ernst Lerch at time of trial

Ernst Lerch, SS-Sturmbannführer, born 19 November 1914 in Klagenfurt, Austria,  employed in his father’s Café Lerch in his home town in the 1930s, adjutant to SS and Police Leader Odilo Globocnik in Lublin, Poland, participant in Operation Reinhard (Aktion Reinhard)– the operation to kill the Jews of Poland, winner of the Iron Cross 1st Class, served as chief of Globocnik’s personal staff in the OZAK (Operationszone Adriatisches Küstenland), tried in Austria in 1972 but trial adjourned without verdict, died in 1997, said of SS-Obergruppenführer Odilo Globocnik, the chief of Operation Reinhard:

“Globocnik has two souls: one sincere and pleasing one; he really was sociable and fun loving, even witty, and then there was another, completely reversed aspect – the harshness and unbending behavior in his work.  The orders, which came from above, were executed in each particular case; an order could not be discussed.  He had the extraordinary ability, sometimes like that of a priest, to obey these orders.”