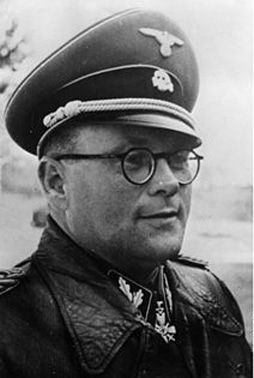 Possibly a childhood friend of SS chief Heinrich Himmler, SS-Gruppenführer Dr. Karl Franz Gebhardt was born in Haag/Upper Bavaria on November 23, 1897.  He was wounded in action and the winner of the Iron Cross 1st Class, while assigned to the 4th Bavarian Infantry Regiment, in World War I; he was also a British prisoner of war for a short time.

He later graduated the University of Munich as a physician.  In 1923, he was a member of the Freikorps/Bund Oberland and participated in the Beer Hall Putsch.  He joined the Nazi Party and SS in 1933.  In 1937, he became chair holder for orthopedic surgery at the University of Berlin. Gebhardt subsequently a personal physician to Heinrich Himmler.  His other titles included Chief Surgeon to the Reich Physician to the SS and Police, President of the German Red Cross.

In 1940, Dr. Gebhardt served a tour of duty in the 2nd SS Division Das Reich.  On May 27, 1942, Himmler sent Dr. Gebhardt to Prague to assist Reinhard Heydrich, who had been gravely wounded in an assassination attempt.  Gebhardt disdained the use of sulfonamide, expecting Heydrich to make a full recovery without antibiotic use (which Gebhardt thought worthless).  Heydrich died of sepsis.

During the war, Dr. Gebhardt conducted horrific medical experiments on several dozen female inmates at the women’s concentration camp of Ravensbrück.  For his achievements, Gebhardt received the Knights Cross of the War Service Cross; he also received the German Cross in Silver.  The “Doctors’ Trial” convicted him of crimes against humanity and issued a death sentence on August 20, 1947.  Karl Gebhardt was executed by hanging on Wednesday, June 2, 1948 at the Landsberg Prison.  His remains were transferred to Munich, where he is buried in the Ostfriedhof (Plot 8, Row 5, Grave 1/2)