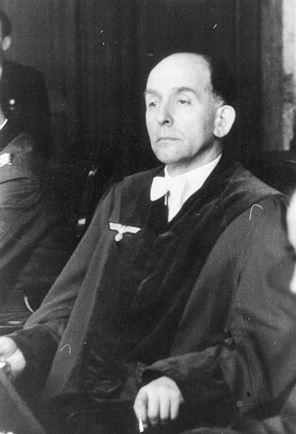 Dr. Roland Freisler served as the Secretary of the Reich Ministry of Justice and President of the People’s Court (Volksgerichtshof.)  Freisler was born on October 30, 1893 in Celle, in Lower Saxony.  The son of an engineer, Roland attended school at the Kaiser Wilhelm grammar school; in 1912, he took his Abitur test for university admission, finishing first in his class.  He went to the University of Kiel, but his schooling was interrupted by World War I.

After the outbreak of the war, Freisler joined the 167th Infantry Regiment in Kassel.  In November 1914, attached to the 26th Reserve Corps, his unit attacked Langemarck in Flanders.  Freisler was wounded, and after convalescing for several months in Germany, he returned to his regiment, which was transferring to the northern sector of the Russian front.  He was promoted to lieutenant and won the Iron Cross 2nd and 1st Class.  Russian troops later captured Freisler, while he was on a reconnaissance patrol.  He remained in a prisoner of war camp north of Moscow until July 17, 1920, when he returned to Germany.

He then resumed his academic career, attending the University of Jena and the University of Berlin.  He joined the extreme right wing Völkisch-Sozialer Bund and followed that by joining the Nazi Party, with membership number 9,679.  He was married and had two sons. 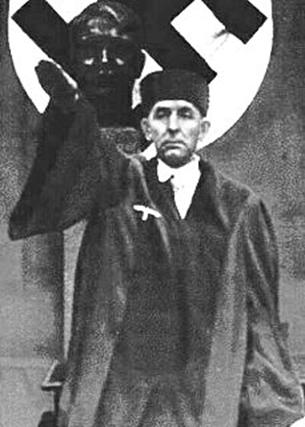 On August 20, 1942, Hitler named Freisler to be the President of the People’s Court.  During his time there, 90% of all proceedings ended with death sentences or life imprisonment.  His most infamous trials occurred in August 1944, when he sentenced numerous major participants, to include Generalfeldmarschall Erwin von Witzleben, in the failed July 20 attempt to assassinate Hitler at Rastenburg.

On February 3, 1945, Freisler was conducting a Saturday session of the People’s Court, when American bombers attacked Berlin.  The People’s Court was severely damaged.  In one report, Freisler was crushed beneath a fallen masonry column in the courtroom; another account stated that Freisler was struck by a bomb fragment, while trying to get to a bomb shelter and bled to death on the pavement outside the People’s Court.  Luise Jodl, then the wife of General Alfred Jodl, recounted more than twenty-five years later that she had been working at the Lützow Hospital, when Freisler’s body was brought in, and that a worker commented, “It is God’s verdict.” According to Mrs. Jodl, “Not one person said a word in reply.”  Freisler’s remains are interred in the plot of his wife’s family at the Waldfriedhof Dahlem cemetery in Berlin.  His name is not shown on the gravestone.   His funeral was attended by his wife, a few colleagues from the People’s Court a few Nazi Party functionaries and a representative of the Ministry of Justice.