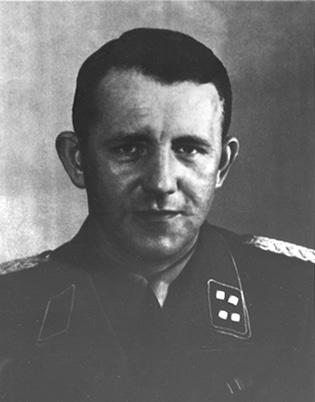 SS-Standartenführer Dr. Rudolf Lange was a key figure in the Einsatzkommando and the Wannsee Conference.  The son of a railway construction supervisor, Rudolf was born on November 18, 1910 in Weisswasser, in eastern Saxony.  Lange received a doctorate in law in 1933 at the University of Jena and soon joined the Gestapo.  He served in the Gestapo office in Berlin in 1936, transferring to Vienna, Austria in 1938 to coordinate the annexation of the Austrian police system with the Reich.  In 1939, Lange transferred to Stuttgart.  He ran the Gestapo offices in Erfurt and Weimar in 1939, before returning to Berlin.

On June 5, 1941, Dr. Lange reported to Pretzsch, in the Wittenberg district in Saxony-Anhalt, and the staff of Einsatzgruppe A.  Lange rose to command Einsatzkommando 2 on December 3, 1941; he also held the position of commander of the Security Service in Latvia.  He planned and executed the murder of 24,000 Latvian Jews at the Rumbula Forest near Riga from November 30 to December 8, 1941.

Lange was then invited to attend the Wannsee Conference on January 20, 1942, to help discuss the “Final Solution to the Jewish Question.”  It was held in the Berlin suburb of Wannsee, along Lake Wannsee on January 20, 1942.  The three-story villa, in which the meeting was held, was built as a villa residence for factory owner Ernst Marlier, a manufacturer of pharmaceutical preparations, in 1915.  Marlier purchased two plots of land on Grosse Seestrasse (later renamed Am Grossen Wannsee) from the Head Forestry Office in Potsdam and the Royal Prussian Waterway Engineering Authority.  Marlier sold the property in 1921 to the North German Real Estate Company in Berlin for 2,300,000 Reichsmarks.  Friedrich Minoux, a member of the board of this company, obtained the property in 1937.  He was arrested in 1940 for helping to embezzle 8,800,000 Reichsmarks.  While in prison, he sold the property for 1,950,000 Reichsmarks to the  Nordhav Foundation, an organization that had been established in 1939 by Reinhard Heydrich to create and maintain holiday homes for members of the SS security services and their relatives.  It was rumored that Heydrich planned to ultimately keep the property for his own home.

Although Lange was the lowest ranking of the present SS officers, Reinhard Heydrich viewed Lange’s direct experience in conducting the mass murder of deported Jews as valuable for the conference.  Afterward, Lange returned to Riga, where he remained until 1945, when he assumed command of the Security Service and Security Police for the Reichsgau Wartheland, at Posen, Poland.  He was promoted to SS-Standartenführer, but soon after, the Red Army surrounded Posen (now Poznań.)  During the siege, Lange was wounded organizing the security police defenses in the city.  He committed suicide at the Kernwerk core fortress in Posen on February 16, 1945, hours before Soviet troops overran these final defenses.  He was posthumously awarded the German Cross in Gold.