Adolf Hitler in World War I

Adolf Hitler in World War I 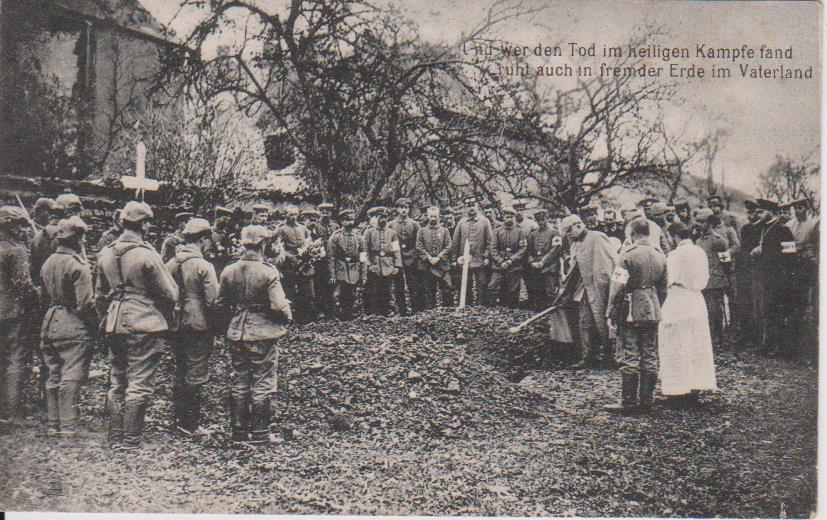 This World War I postcard from Germany, which shows a burial of German soldiers during the war.  On the reverse, the card is postmarked November 18, 1915.  Most importantly, it is also marked as coming from the 10th Company of the 16th Bavarian Reserve Infantry Regiment in the 6th Bavarian Reserve Division.  The religious leader in the white cassock appears to be Father Norbert (Norbert Stumpf.)  The soldiers with the armbands are medical personnel.  While at full strength, a German infantry company fielded about 240 men, companies were rarely anything close to full strength, so an average of about 100 might be more accurate.  There seem to be about 50 men present in this photograph.

Why is this photograph anything more than one of the hundreds of thousands of routine depictions of World War I ?

Probably because by this date in 1915, Corporal Adolf Hitler was assigned to the 10th Company shown here, according to several expert sources.

I have looked at the photo for hours under magnification and am not able to say that I have found Hitler in the formation.  As his duties also consisted as a message carrier, or runner, to regimental headquarters, it is quite possible he did not attend this burial. 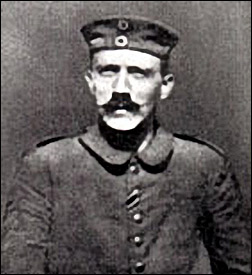 This is a known photo of Hitler during the war.  Unfortunately, it seems that many men in his unit sported flourishing mustaches, so that feature does not narrow down identification.  Below is a second known photo.  When Hitler was in a small group having its picture taken, he often stood or sat near the edge of the group.  But the men at the funeral service probably had no idea that the group was having its picture taken. 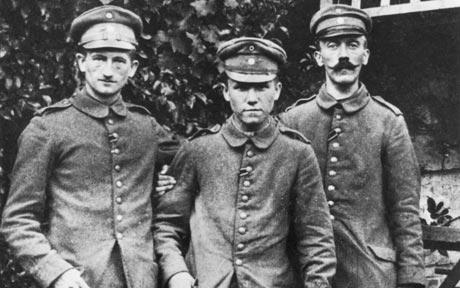 If you can identify the future dictator of Nazi Germany in the top photograph, please let me know who you believe it is!