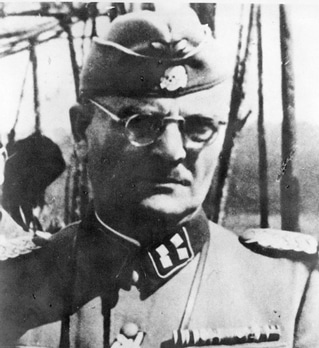 SS-Obersturmbannführer Christian Wirth was born on November 24, 1885 in Oberbalzheim, in the Launberg district of Württemberg.  He attended the Volkschule in Oberbalzheim for eight years and then trained as a carpenter before being employed by the Buhler Brothers Timber Works.

Wirth suffered from asthma his entire life, but managed to join the 123rd Grenadier Regiment “König Karl” in 1905.  He served with the unit for five years, before joining the Schutzpolizei in 1910.  For the next fpur years, Wirth progressed through the ranks, elevating to the Kriminalpolizei.  In 1914, Wirth became a corporal in the 246th Reserve Infantry Regiment.  Fighting on the Western Front in Flanders, the Somme and Aisne-Champagne, Wirth won the Iron Cross 2nd and 1st Classes.  He was wounded in the right arm and received the Wound Badge in Black; during the conflict, he rose to become a sergeant and finally an acting officer. He subsequently became a police officer in Stuttgart, joining the Nazi Party on January 1, 1931 (He reportedly may have been in the Nazi Party in the early 1920s), the SA in 1933 (where he was a Sturmführer in SA-Sturm 119) and the SS in 1939.  By that time, he was the Head of Kommissariat 5.  Wirth subsequently served in a Gestapo position in Vienna and the Security Police in Prague.

Christian Wirth played a significant role in the Nazi T4 euthanasia program in the late 1930s, personally participating in the first gassing experiments at Brandenburg, Grafeneck Castle and Hartheim Castle.  Wirth then passed the examination at the leadership school of the Security Police and was promoted to Kriminalkommissar.  He was reported to have been in Lublin and Chelmno in the fall of 1941, possibly involved in killing operations.

In late 1941, SS-Gruppenführer Odilo Globocnik encountered difficulties in executing Operation Reinhard and brought Wirth to Lublin to supervise the three major extermination camps – Belzec, Sobibór and Treblinka.  Nicknamed “The savage Christian,” “Christian the Terrible” and “Stuka,” he recruited T4 staff from Germany, conducted efficiency experiments with Zyklon B and carbon monoxide, and in general proved so successful that he received the War Service Cross 2nd and 1st Classes.

As Operation Reinhard drew to a close, Wirth played an instrumental role in Aktion Erntefest — the massacre of remaining Jews workers in the Lublin area work camps.  Wirth then transferred to San Sabba Trieste to work for his old boss Odilo Globocnik, forming and heading Einsatz R, an SS and Police Sonderkommando.

Christian Wirth was killed in action near Kozina, Istria by partisans on May 26, 1944.  British historian Michael Tregenza supposedly located a diary of a Slovenian partisan, who organized the ambush that killed Wirth; other sources are unsure of who actually killed him.  Wirth was initially buried with full military honors at the German Military Cemetery in Opcina (near Trieste.)  Christian Wirth was exhumed in 1959 and is currently buried at the German Military Cemetery at Costermano, Italy. 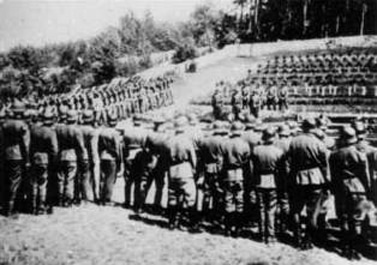