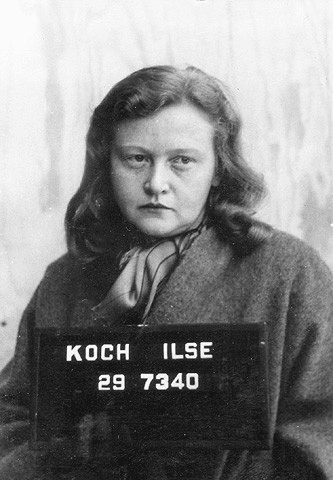 Ilse Koch, wife of Karl Koch (Buchenwald commandant), born 22 September 1906 in Dresden, worked as a guard and secretary at the Sachsenhausen concentration camp, reportedly collected items made of human skin, nicknamed: “the Bitch of Buchenwald”, arrested with her husband by SS authorities in 1943 on charges of private enrichment, embezzlement, and the murder of prisoners to prevent them giving testimony but charges dismissed due to lack of evidence,[convicted of crimes against German nationals in 1951, sentenced to life imprisonment by a West German court, committed suicide in prison by hanging herself with a bed sheet 1 September 1967 at the Aichach prison near Dachau, Bavaria, buried in an unmarked and untended grave in the cemetery at Aichach, reported last words on the day of her death were:

“Death is the only deliverance.”