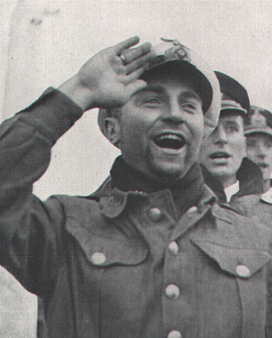 Heinrich Günther Prien, Navy U-boat Commander, was born on January 16, 1908 in Osterfeld/Thüringia, the son of a judge.  In 1923, he joined the German Merchant Navy, receiving his Master’s License in 1932.  He subsequently joined the German Navy and went into the U-boats, receiving command of the U-47 in 1938.  A year later, shortly after the outbreak of World War II, Günther Prien took his submarine into Scapa Flow and sank the British battleship HMS Royal Oak.  Upon returning to Germany, Prien and the crew of the U-47 received heroes’ welcomes in Berlin.  Prien received the Knight’s Cross of the Iron Cross.  His later career saw him promoted to Korvettenkapitän (Lieutenant Commander) and awarded the Oak Leaves to his Knight’s Cross.  He conducted ten wartime patrols, spending 238 days at sea.

In addition to sinking the 29,150-ton Royal Oak, Prien sank 30 merchant ships, for a total of 162,769 tons.  He and the crew of the U-47 were killed in action on March 7, 1941 in the North Atlantic.  Initially, it was believed that his submarine was sunk by the British destroyer HMS Wolverine.  But current history is unsure and the U-47 could have been the victim of an accident or mechanical failure.  Before his last patrol, Günther Prien authored Mein Weg Nach Scapa Flow (My Way to Scapa Flow.)