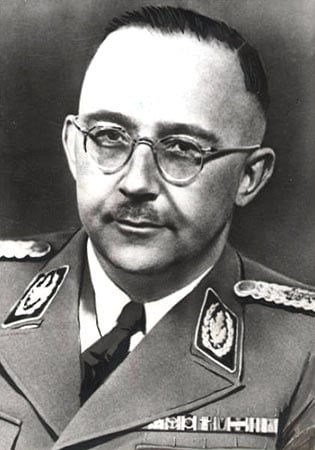 Heinrich Luitpold Himmler was born in München on October 7, 1900 in a Roman Catholic middle-class family.  His father, Gebhard Himmler, was a teacher; his mother was Anna Maria Heyder.  He had one older brother Gebhard Ludwig and one younger, Ernst.  Heinrich was named after his godfather, Prince Heinrich of Bavaria of the royal family of Bavaria, who had been tutored by Gebhard Himmler.  Heinrich attended grammar school in Landshut, where Gebhard served as deputy principal. He did well in his schoolwork, although he struggled in athletics.

Young Heinrich’s health was poor; he would have lifelong stomach complaints and other ailments.  To remedy this, he trained daily with weights as a youth and exercised to become stronger.  Fellow students recalled him as studious but awkward in social situations.  In 1915, Himmler began training with the Landshut Cadet Corps.  His father used his connections with the royal family to get Heinrich accepted as an officer candidate, and Himmler enlisted with the reserve battalion of the 11th Bavarian Regiment in December 1917.

After the war, Himmler completed grammar school.  Following an apprenticeship on a farm and a subsequent illness, he studied agronomy at the Technische Hochschule in München.  In his second year, he joined an Anti-Semitic nationalist group, the Reichskriegflagge.

Himmler joined the Nazi Party in August 1923, with a Nazi Party number of 14,303.  He was involved in the Beer Hall Putsch on November 9, 1923.  From mid-1924, Himmler worked under Gregor Strasser, a leading party leader, as a party secretary and propaganda assistant.  Travelling across Bavaria agitating for the party, he gave speeches and distributed literature; within months, he became the head of the party office in Lower Bavaria and was responsible for integrating the areas membership with the ‘Nazi Party, under Hitler, when the party was re-founded in February 1925.

That same year, Himmler joined the SS (SS #168), initially holding a position of SS-Gauführer for Lower Bavaria.  He soon became the deputy propaganda chief for the party as well.  In September 1927, Himmler briefed Adolf Hitler on his vision to transform the SS into a loyal, powerful, racially pure elite unit.  Hitler’s response was to appoint Himmler as the Deputy Reichsführer-SS, with the rank of SS-Oberführer, under Erhard Heiden.  Heiden fell into disgrace, after allegations surfaced that parts of his uniform were customized by a Jewish tailor, and on January 5, 1929, he was dismissed by Adolf Hitler and succeeded by Heinrich Himmler as Reichsführer-SS.  Never one to underestimate a potential rival, in April 1933, Himmler ordered Erhard Heiden arrested members of the Sicherheitsdienst.  Heiden was killed shortly after, presumably at SD headquarters in München, but his corpse was only found in September 1933; he was buried on September 15, 1933.

During the 1930s, Himmler set up an SS empire in Germany, to include the concentration camp system in March 1933.  He led the purge of the SA, Sturmabteilung Brownshirts on June 30, 1934 (known as “The Night of the Long Knives.”)  In addition to assuming control of the police, Himmler established an SS military branch that later became known as the Waffen-SS.  Growing the Waffen-SS became a Himmler priority, as did establishing the Einsatzgruppe beginning in 1939 with the invasion of Poland.  During the war, he was a major architect of the “Final Solution.”

The Waffen-SS grew in scope to several dozen divisions and 800,000 troops.  Hitler relied on these forces even more after the failed July 20 Bomb Plot against his life.  Hitler appointed Himmler the commander of Army Group Vistula on the Eastern Front in January 1945, but replaced him on March 20, 1945, when Himmler’s military incompetence proved too great.  That spring, Himmler attempted to negotiate an independent peace settlement through the Swedish Red Cross, using Jewish prisoners as bargaining assets.  The Allies refused.  Himmler and Hitler met for the last time on April 20, 1945, on Hitler’s birthday, at the Führer bunker, where Himmler swore total loyalty to Hitler.  At a military briefing later that day, Hitler stated that he would not be leaving Berlin, in spite of Soviet advances. Along with Hermann Göring, the head of the German Air Force (Luftwaffe) Himmler quickly left the city immediately after the briefing.  Himmler made his way to Flensburg in northern Germany, where he reported to Grand Admiral Karl Dönitz, who had been named by Hitler as his successor.  Dönitz, knowing that Himmler was of no value at this point, dismissed Himmler from all his positions.

At the end of World War II in early May 1945, Heinrich Himmler attempted to go into hiding. Although he had not made extensive preparations for this, as other high-ranking Nazis had, he had equipped himself with a forged paybook under the name of Sergeant Heinrich Hitzinger.  With a few companions, he headed south on May 11, 1945 to Friedrichskoog, without a final destination in mind.  The group continued to Neuhaus, before splitting up; Himmler and two aides were stopped at a British checkpoint on May 21, 1945 and detained.  Over the following two days, Himmler – still in disguise – was moved around to several camps, before arriving at the British 31st Civilian Interrogation Camp near Lüneburg on May 23, 1945.  During a routine interrogation, Himmler admitted who he was and was immediately searched.  After finding nothing, military police took him to the headquarters of the Second British Army in Lüneburg, where a physician conducted a medical exam.  When the doctor attempted to examine the inside of Himmler’s mouth, Himmler jerked his head away, bit into a hidden cyanide pill and collapsed onto the floor.  He was dead within fifteen minutes.  Shortly afterward, the British buried Himmler’s body in an unmarked grave near Lüneburg.  The precise location of the grave remains unknown.  Since the war, pictures of the deceased Himmler appear to show that his nose had been broken, and rumors still persist that a British physician gave him an injection of some unknown substance just before he died.