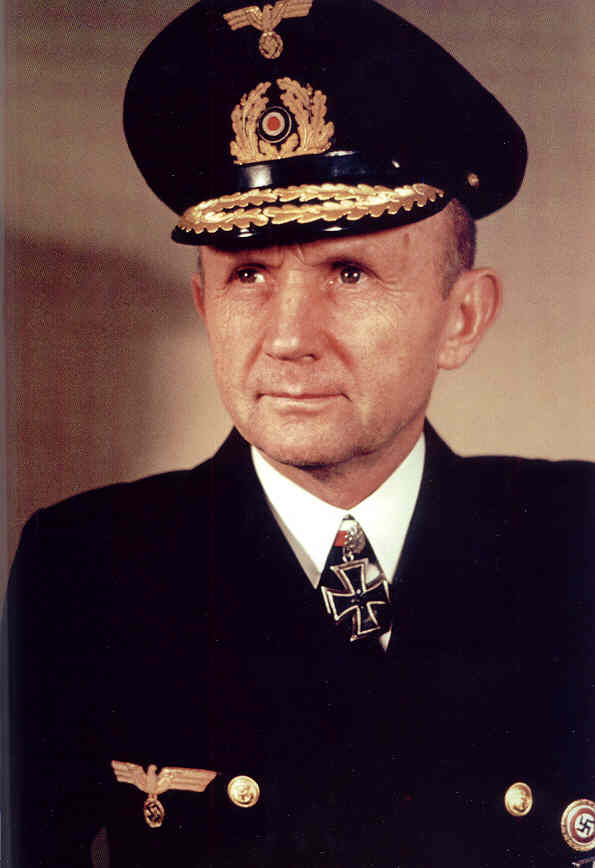 Karl Dönitz, Navy Grand Admiral, was born on September 16, 1891, in Grünau near Berlin.  As a young officer, Dönitz served in World War I on the light cruiser SMS Breslau and then on several U-boats.  His boat was sunk on October 4, 1918 and he became a prisoner of war of the British.  He served in numerous positions after the war and became the commander of the First U-boat Flotilla “Weddigen” on September 1, 1935.  Dönitz became the commander of all Germany’s U-boats on January 28, 1939.  Nicknamed “The Lion” and “Onkel (Uncle) Karl,” he led this force to within a whisker of defeating Great Britain in the early part of World War II.  After the sacking of Grand Admiral Erich Raeder, Karl Dönitz became the Commander-in-Chief of the German Navy on January 30, 1943.  In a surprise decision by Adolf Hitler, he named Karl Dönitz as the Führer‘s successor in May 1945.  During the war, Grand Admiral Dönitz received the Knight’s Cross of the Iron Cross with Oak Leaves.  Both his sons were killed in action during the conflict.  Dönitz’s final message to his U-boat sailors on May 4, 1945 was:

“My U-boat men!  Six years of U-boat war lie behind us.  You have fought like lions.  A crushing material superiority has forced us into a narrow area.  A continuation of our fight from the remaining basis is no longer possible.  U-boat men!  Undefeated and spotless you lay down your arms after a heroic battle without equal.  We remember in deep respect our fallen comrades, who have sealed with their death their loyalty to the Führer and Fatherland.  Comrades!  Preserve your U-boat spirit, with which you have fought courageously, stubbornly and imperturbably through the years for the good of the Fatherland.  Long live Germany!  Your Grand Admiral.”

In 1946, Karl Dönitz was convicted at Nürnberg of war crimes and sentenced to ten years imprisonment.  Dönitz was released from Spandau Prison (Berlin) in 1956.  He later authored Memoirs: Ten Years and Twenty Days.  Karl Dönitz died on December 24, 1980 in Aumühle near Hamburg.  Several thousand former U-boat sailors attended his burial ceremony at the Waldfriedhof (Forest Cemetery) in Aumühle.  Dönitz’s Crews is all about the relationship Dönitz had with his U-boat sailors during the war.