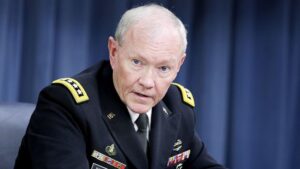 Martin E. “Marty” Dempsey, the 18th Chairman of the Joint Chiefs of Staff, was born on March 14, 1952 in Bayonne, New Jersey. Growing up in Goshen, New York, he graduated from the United States Military Academy (ranking 257 of 833) with a Bachelor of Science degree and a commission as an Armor officer, on June 5, 1974.  During “Operation Desert Storm,” Dempsey served as the Executive Officer of the 3rd Brigade in the 3rd Armored Division “Spearhead.” He later commanded the 4th Battalion, 67th Armor.  In June 2003, he assumed command of the 1st Armored Division “Old Ironsides” and remained in command until July 2005.  He then became the Commander, Multi-National Security Transition Command-Iraq, where he helped train the new Iraqi Army. Later serving as the Deputy Commander, U. S. Central Command, he became the acting commander, following the untimely departure of Admiral William J. Fallon. Promoted to a fourth star, Martin Dempsey became the commander of the U. S. Army Training and Doctrine Command in December 2008.

General Dempsey held this position for twenty-eight months and then became the 37th Chief of Staff of the United States Army (CSA) on April 11, 2011.  But his tenure as CSA was short.  On October 1, 2011, General Martin Dempsey became the Chairman of the Joint Chiefs of Staff.  He held this position until September 2015 when he retired from Active Duty.