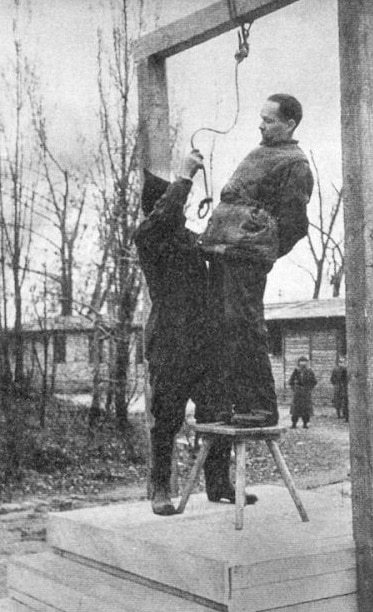 Rudolf Franz Ferdinand Höss served as the first commandant of the Auschwitz concentration and extermination camp from May 4, 1940 to November 1943, where it is estimated that more than a million people were murdered.

Höss was born in Baden-Baden into a Catholic family on November 25, 1901.  His father, a former army officer who served in German East Africa, ran a tea and coffee business; Rudolf was the eldest of three children and the only son.  When World War I erupted, Rudolf Höss served briefly in a military hospital.  Then, at the age of just fourteen, he was admitted to his father’s old regiment, the 21st Regiment of Dragoons.  He fought with the Turkish Sixth Army at Baghdad, Kut-el-Amara, and in Palestine, rising to the rank of sergeant – at age seventeen the youngest non-commissioned officer in the army.  Höss was wounded three times and was a victim of malaria.  A brave soldier, he received the Iron Cross 1st and 2nd Classes and the Baden Military Bravery Medal.

After the war, Höss completed his high school education, following which joined nationalist paramilitary groups that were forming in the post-war chaos.  He enlisted in the East Prussian Volunteer Corps and then the Freikorps Rossbach in the Baltic area, Silesia, and the Ruhr. During the Silesian Uprisings, he participated in guerrilla attacks against Polish people, and later conducted sabotage against French occupation forces in the Ruhr.  Joining the Nazi Party in 1922, on May 31, 1923, Höss and members of the Freikorps beat suspected Communist Walther Kadow to death as revenge for the French execution of German paramilitary soldier Albert Leo Schlageter five days earlier.  One of the killers unwisely told a local newspaper of the murder; authorities arrested Rudolf Höss, who accepted blame as the leader of the event, found him guilty and sentenced Höss to ten years imprisonment.  As part of a general amnesty, Höss was released in July 1928.

Rudolf Höss was married and had five children, two sons and three daughters  He was accepted into the SS on April 1, 1934 and was assigned to the SS-Totenkopfverbände (Death’s Head Units.)  In December 1934, he assumed duties at Dachau concentration camp.  By 1938, he was promoted to SS-Hauptsturmführer and was made adjutant to Hermann Baranowski at the Sachsenhausen concentration camp outside Berlin.  The following year, he joined the Waffen-SS.

On May 1, 1940, Rudolf Höss was appointed commandant of a prison camp in western Poland, built around an old Austro-Hungarian (and later Polish) army barracks near the town of Oświęcim.  It would be known throughout history by its German name – Auschwitz.  SS-Obersturmbannführer Höss commanded the camp for three and a half years, during which he expanded the original facility into a sprawling complex known as Auschwitz-Birkenau concentration camp.  During this time, Höss lived at Auschwitz in a villa together with his wife and children.  At its peak, Auschwitz was three separate facilities – Auschwitz I, Auschwitz II/Birkenau, and Auschwitz III/Monowitz, which included many satellite sub-camps.  Auschwitz I served the administrative center for the complex and the site where many medical experiments were conducted; Auschwitz II/Birkenau was the extermination camp, where most of the killing took place; and Auschwitz III/Monowitz the slave labor camp for I. G. Farben and other German industries.

In June 1941, Höss attended a meeting in Berlin with Heinrich Himmler to receive instructions.  Himmler told Höss that Adolf Hitler had given the order for the physical extermination of Europe’s Jews.  Himmler had decided on Auschwitz for this purpose due to its easy access by rail and because the extensive site offered space for measures ensuring isolation.  Himmler continued by telling Höss that he would be receiving all operational orders from Adolf Eichmann, warning Höss that the project was to be treated with the utmost secrecy and that no one was allowed to speak about these matters with any person.  Höss said later that he kept that secret until the end of 1942, when he told his wife.

A stickler for efficiency, Höss began to perfect techniques of mass killing, visiting other killing centers whenever he could.  According to Höss, during standard camp operations, two to three trains, each carrying 2,000 prisoners, would arrive daily for periods of four to six weeks. The prisoners were unloaded in the Birkenau camp; those fit for labor were marched to barracks in either Birkenau or one of the Auschwitz camps, while those unsuitable for work were driven immediately into the gas chambers.  Initially, the SS operated small gassing bunkers deep in the nearby woods, to avoid detection.  Later, they constructed four large gas chambers and crematoria in Birkenau to make the killing more efficient and to handle the increasing rate of exterminations.  Studying what was being done at the Treblinka extermination camp, Höss improved on the methods at Treblinka by building his gas chambers ten times larger – so that Auschwitz could kill 2,000 people at once, rather than 200.

Arthur Liebehenschel replaced Höss on November 10, 1943.  The two men switched duties, with  Höss assuming Liebehenschel’s former position as the chief of Department D I in the SS Economic and Administration Office, under Oswald Pohl.  Höss was also appointed the deputy of the inspectorate of the concentration camps under Richard Glücks, which was located at Oranienburg, just north of Berlin.   Rudolf Höss returned to Auschwitz on May 8, 1944 to supervise a special action – the murder of 430,000 Hungarian Jews, who were transported to the camp and killed between May and July of 1944.  However, even Höss’ expanded facility could not handle the huge number of corpses and special details of prisoners were pressed into service to dispose of thousands of bodies by burning them in open pits, placing the bodies on wooden railroad ties and using the human fat in the bodies to keep the fires going twenty-four hours per day.  The stench was so great that people could smell it from miles away.

As the war drew to an end in 1945, Heinrich Himmler advised Höss to disguise himself among German Navy personnel.  Höss evaded arrest for nearly a year, but on March 11, 1946, British troops captured Höss – disguised as a farmer and calling himself Franz Lang.  After being questioned and allegedly beaten severely, Höss confessed his real identity.  He appeared as a witness at the International Military Tribunal at Nürnberg in April 1946, where he gave detailed testimony of his crimes.  On May 25, 1946, Polish authorities took control of Höss and handed him over to the Supreme National Tribunal in Poland, which tried him for murder.  The tribunal sentenced Höss to death on April 2, 1947.  The sentence was carried out on April 16, 1947, immediately adjacent to the crematorium of the former Auschwitz I concentration camp, where Höss was hanged on a gallows constructed specifically for that purpose.