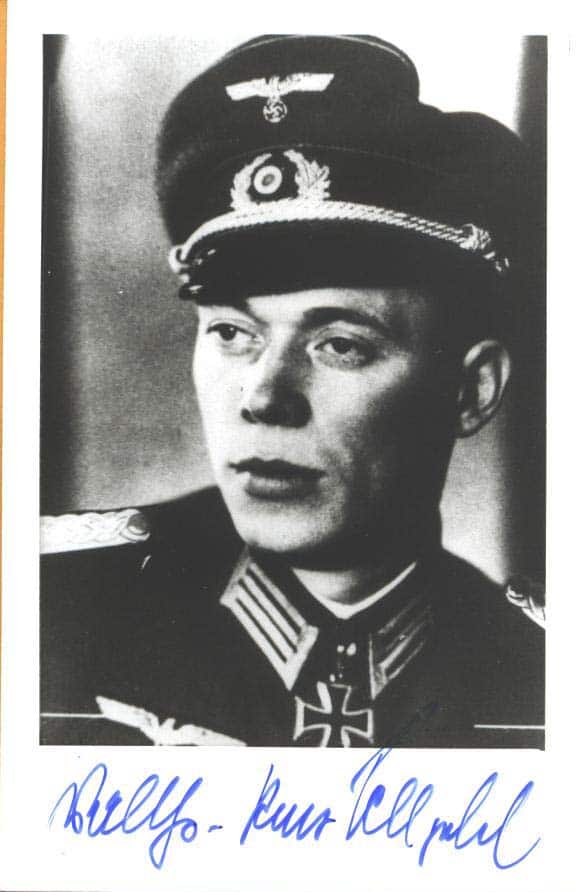 The son of General Erich Fellgiebel, a major conspirator in the July 20 plot to assassinate Adolf Hitler at Rastenburg, Walther-Peer Fellgiebel was born on May 7, 1918 in Berlin-Charlottenburg.  Walther had his own distinguished military career.  He won the Iron Cross Second Class on July 13, 1940, during the French Campaign.  On July 30, 1941, Fellgiebel received the Iron Cross First Class and the Wound Badge in Black, for actions on the Russian Front with the 298th Artillery Regiment.  He would receive the Wound Badge in Silver, for additional wounds, on August 3, 1943.  An artilleryman, Walter Fellgiebel won the Knight’s Cross of the Iron Cross on September 7, 1943 as the battery commander of the 2nd Battery of the 935th Light Army Artillery Detachment.  Ten days later, Fellgiebel received the General Assault Badge.

The younger Fellgiebel was probably unaware of his father’s participation in the assassination plot, but was arrested on August 1, 1944.  He was released and promoted to major on November 9, 1944.  In February 1945, authorities arrested him again, but senior Army officers interceded on his behalf and he thus survived the war.

After the conflict, he served as the head of the Association of Knights Cross Recipients.  He later wrote Die Träger des Ritterkreuzes des Eisernen Kreuzes, 1939–1945: Die Inhaber der höchsten Auszeichnung des Zweiten Weltkrieges aller Wehrmachtteile (The Bearers of the Knight’s Cross of the Iron Cross 1939–1945: The Owners of the Highest Award of the Second World War, All Military Branches.)  Walther-Peer Fellgiebel died in Frankfurt am Main, Germany on October 14, 2001.