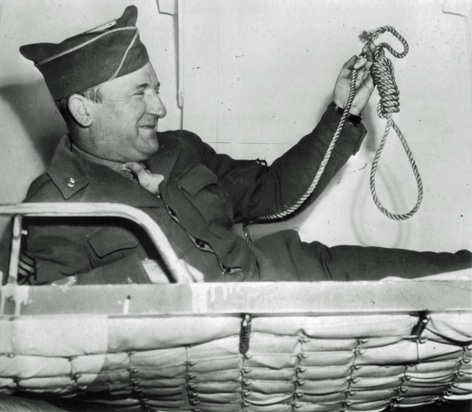 John C. Woods on troopship — this photo and several other photos of Woods in The Fifth Field were graciously supplied by the Associated Press archives

During World War II, Master Sergeant John C. Woods served as a hangman assigned to the Loire Disciplinary Training Center at Le Mans, France; in his capacity, he hanged at least twenty-three soldiers – and possibly up to thirty-five – and was the assistant hangman for five others in the European Theater of Operation.
Woods was born in Wichita, KS on June 5, 1911.  Woods, who came from a broken home and was placed in the custody of his grandmother and grandfather when his parents were divorced when he was ten, completed freshman year at Wichita High School, but the dropped out.  He enlisted in the Navy in 1929, but deserted.  Authorities apprehended him, convicted him by a Summary Court-Martial and dismissed him for being mentally unstable and unsuitable for military service.
He received a dishonorable discharge from the Civilian Conservation Corps after six months in 1933, when he went AWOL and refused to work.  Prior to his induction in the Army on August 30, 1943, he lived in Eureka, Kansas; he was married to Hazel Chilcott on September 30, 1933 in Eureka, Kansas; the couple had no children.  At his Army induction, he was listed as having blue eyes, brown hair with a ruddy complexion, standing 5’4½” tall and weighing 130 pounds.
He reported to Fort Leavenworth, KS to begin training on September 19, 1943; he was assigned to Company B of the 37th Engineer Combat Battalion in the 5th Engineer Special Brigade on March 30, 1944.  Woods may have participated in the landings on Omaha Beach on June 6, 1944 with his unit.  He was attached to the 2913th Disciplinary Training Center in October 1944; orders in December 1944 show him assigned to the Provost Marshal Section in the Headquarters of the Brittany Base Section.  Woods was formally assigned to the 2913th DTC on February 12, 1945; on May 7, 1945, he was assigned to the Headquarters of the Normandy Base Section, but was attached back to the 2913th for duty.  On September 3, 1945, Woods was released from attachment and assigned to the Headquarters CHANOR Base Section.
Woods gained international fame in October 1946, as the official hangman for the International Military Tribunal at Nürnberg.  There, he executed ten senior German military and civilian officials previously convicted of egregious crimes against humanity, crimes against peace and war crimes.  During his career as a hangman, he reportedly executed 347 men, but this is a large exaggeration.
Woods was accidentally electrocuted on July 21, 1950 on Eniwetok Atoll.  He is buried in the city cemetery in Toronto, KS, a small town sixty miles east of Wichita, next to his wife.  John Woods was awarded the European-African-Middle Eastern Campaign Medal (with one campaign star), the Good Conduct Medal, the Occupation (Germany) Medal, the World War II Victory Medal and a Distinguished Unit Badge.
John C. Woods was a central figure in The Fifth Field, but he deserves his own biography that is now in the making!