Albert Pierrepoint served as the assistant executioner for his uncle, Thomas Pierrepoint, in seven executions of American soldiers.  The Pierrepoints were a Yorkshire family who provided three of Britain’s Chief Executioners (sometimes called “scaffolders”) in the first half of the 20th century.  Henry Pierrepoint took up the craft first, hanging 105 men from 1901 to 1910.  According to reputable sources, Henry could execute a man in the time it took the prison clock to strike eight – leading him from his cell to the adjacent death chamber on the first stroke, and having him suspended, dead on the rope, by the eighth and final stroke.  Henry persuaded his older brother Thomas W. to take up the calling.  Albert Pierrepoint, born March 30, 1905, Henry’s son and Thomas’s nephew, outdid his father and uncle combined, and executed 434 people (including 16 women) between 1932 and 1956.  Albert resigned over a disagreement about fees in 1956, when he was not paid the full sum of 15£ for an execution.  He was also the proprietor for two pubs, “Help the Poor Struggler” and the “Rose and Crown.”  Albert Pierrepoint died on July 10, 1992 in a nursing home in Southport, Lancashire. Adrian Roose, Director of Paul Fraser Collectables, Bristol, England, graciously provided this photograph; the logbook was on sale at the time from the firm, but Mrs. MacLean balked at the price. 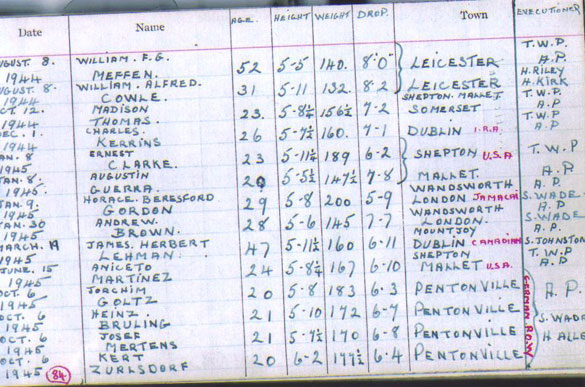