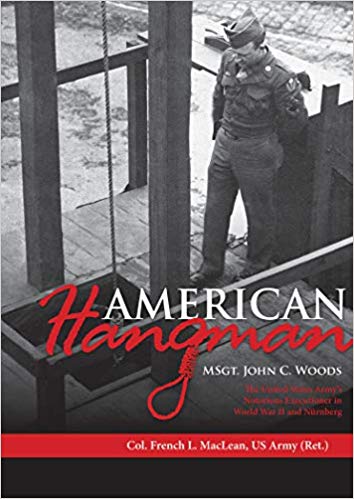 (September 23, 2019)  American Hangman: MSgt. John C. Woods: The United States Army’s Notorious Executioner in World War II and Nürnberg is published and you can start ordering now.  The book is fabulous; the price of $29.99 is an excellent buy considering that it has 108 black and white photos from the period, several of which are from the family with their kind permission, and where he resided that I guarantee you that you have never seen before.  The work is 256 pages, with endnotes and sources that dispel all the myths surrounding this fascinating character.  Most importantly, this is what I call a “one off” book.  Once you read this, you will know everything you would want to know about the “American Hangman.”  There are no other books about him.  There are a few magazine articles, first published in 1946 and continuing occasionally to today, but most of the information in them is extremely inaccurate which you’ll see.

But don’t worry; his actual life is more interesting than the myths about him were.

You will be able to read, from primary official documents, the details of every man for which John Woods was the assistant or primary hangman.  He did not, as magazines claimed, hang 347 men, nor did he hang, as he once claimed, 200 men.  Some were American soldiers; others had been  German or Austrian war criminals.  Then there were the last ten men Woods would ever hang, the top Nazi war criminals that had been condemned to death at the International Military Tribunal at Nürnberg.  Only Hermann Göring cheated Woods as he took poison just hours before his schedule execution.  You’ll read about that too and also about how Woods hanged Julius Streicher, one of the ten men, after Streicher had “disrespected” Woods on the scaffold!

But the story goes much deeper and reveals his young days, his short stint in the United States Navy about 1930, almost missing his wedding ceremony just after Prohibition was lifted, his brush with the law bouncing checks, driving a truck for a hearse company, joining the United States Army in 1943 and fighting at the Easy Red sector of Omaha Beach on June 6, 1944 as men died in bunches around him.

Did you know that John Woods could smoke a cigarette and blow smoke out of his ears?  Well, his nieces remembered that and a great deal of additional information about a man who adored his wife, loved dogs, liked to make officers uncomfortable, had an affinity for Wild Crow bourbon whiskey, had a storehouse of entertaining stories to tell his friends and who botched more than a few hangings, the reports of which made it back to the War Department in Washington, DC.

After reading this book, you will feel that not only do you know about John C. Woods but that you would have enjoyed having a beer with him.  In fact, one of the characters in this book used to do just that in various pubs at Le Mans, France almost every day for six months in 1945.  He’ll fill you in on details that the US Army never knew about the “American Hangman.”

But beware, it might not stop with a beer; as John might tell you: “I never saw three quarts of whiskey disappear so fast in my life.”  (Said to True: The Man’s Magazine at Fort Dix, New Jersey in November 1946, concerning his team having a few drinks after the Nürnberg hangings.)

An easy read, in deference to my Army Buddies, American Hangman sheds crucial light on the death penalty in the US Army in Europe in World War II, the execution of Nazi war criminals, and the effects of participating in an execution on the part of those ordered to carry it out.  And his mysterious death?  Well you’ll just have to hold off reading that last chapter till you get through the rest of the book!

For much of World War II, history books have described the influence that commissioned officers have had on shaping significant events.  Now it’s time for you to meet the man that went from private to master sergeant in one day and who had officers, from lieutenant to brigadier general, dancing to his tune.