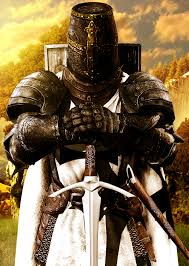 Nation-states are not the only potential actors on the stage against militant Islam.  Nation states are slow to act; it often seems that ISIS is one or two steps ahead of any nation state would-be coalition against them.  However, from their inception centuries ago, modern nation states desire a monopoly on violence.  They are loathe to have other military forces on their sovereign territory and many, many nation states – including unfortunately some administrations in our own government – desire to limit even the ownership of weapons inside their society.  Nation states are comfortable with their own military and police being armed, but not many are confident enough to allow their own citizens to own arms.

In the Middle Ages, nation states were just beginning to be formed from feudal society.  Kings and queens still exerted power and, at least in much of Europe, the Roman Catholic Church delved deep into political issues.

Pope Urban II, for example, in March 1095, received an ambassador from the Byzantine Emperor requesting assistance against Muslim (Seljuk) Turks who had taken over most of formerly Byzantine Anatolia.  That November at a great council, that would become known as the Council of Clermont, attended by numerous Italian, Burgundian and French bishops, the summoned the attending nobility and the people to wrest the Holy Land, and the eastern churches generally from the control of the Seljuk Turks.  The Crusaders, those who went on the First Crusade to liberate the Holy Land, captured Jerusalem in 1099, but in most of the Crusade era, Muslim military forces held the upper hand in the region, making pilgrimages to the Holy Land uncertain in the best of circumstances.

In 1119, the “Poor Knights of Christ and the Temple of Solomon” were formed to help protect these pilgrims in their journey.  These Knights Templar were officially endorsed by the Roman Catholic Church around 1129; beginning as a small group, they originally helped protect Christian pilgrims in the Holy Land and later became significant combat assets, fighting in numerous battles.  A Cistercian abbot, St. Bernard of Clairvaux, soon popularized the Knights Templar in his manuscript New Knighthood.

Not all Knights Templar were warriors; most of their ranks were filled with those who would support – acquire resources which could be used to fund and equip the small percentage of Knights Templar who were fighting on the front lines.  Often serving as a small shock force in an army that was predominantly non-Knights Templar, the warriors achieved successful results in many battles until 1187, when they were soundly defeated at Battle of the Horns of Hattin, where many were killed in combat and those that were captured were put to the sword.  The order made a resurgence the next decades, but after the Siege of Acre in 1291, the Templars were, in the main, forced off the Holy Land and retreated to the island of Cyprus.  A few stronghold fortresses remained, but by 1300 the order was clearly in decline.

Powerful bankers and advisors, the Knights Templar were often viewed with distrust by some in the nobility and the church.  While they still had a base of operations in Cyprus, and controlled considerable financial resources, the Templars became an Order without a clear purpose or support, and this unstable situation contributed to their downfall.  King Philip IV of France ordered the arrest of dozens of French Templars at dawn on Friday, October 13, 1307.  Under torture, they confessed to numerous crimes.  The Templars sought help from Pope Clement V; it was in vain.  The predominant historical view is that King Philip was jealous of the Templars’ wealth and power, and frustrated by his massive debt to them, he sought to seize their financial resources by bringing blatantly false charges against them.  After the Council of Vienne in 1312, Pope Clement V issued an edict officially dissolving the Knights Templar.  Two years later, several leaders of the Order were burned at the stake.  However, in their heyday, the Knights Templar had proven to be a formidable force in the protection of thousands of unarmed pilgrims seeking to fulfill religious requirements by visiting the Holy Land.

In future years, could a new version of the Knights Templar (perhaps called something different) of individuals from around the world, banding together in a para-military force, protect innocent non-combatants of every faith – including Islam – in the Middle East?

Although it would be portrayed as a “Christian Army” by the jihadists and some of the western secular media, could an organized group of defenders of the innocent (that included not only military capability but also doctors, nurses and civil engineers from many faiths who decided to stand up and protect those who cannot defend themselves) actually be a unifying factor in the region?  Such a dynamic would not be a mercenary army; it would be a force of individuals of conscience motivated primarily by a desire to protect the would-be victims of militant Islam, fully cognizant of the brutal treatment they would receive if captured by ISIS elements, but motivated to fight nonetheless.  Could a new Knights Templar embody what the United Nations first believed it could do, but that has now become so mired in politics that it is almost always a day late and a dollar short?  Could a new Knights Templar make the conflict not just that of the United States and some selected other nation states, but one of the entire civilized world against the jihadists?  Could a force of this nature — a new Knights Templar — with volunteers from around the globe, create this dynamic?  To be continued…