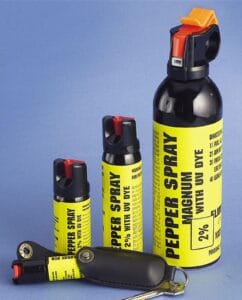 But what about a carjacker who has in mind not only taking your car, but taking you in it – to some deserted area where he has some really nefarious plans for you?  We simply do not know this number, just as we do not know which carjackers have itchy trigger fingers.

So what to do?  There are numerous passive defenses; in carjackings, “passive” is not necessarily sub-optimal: park in a safe spot (back into parking spaces to easier see and get away) as close to the building door as possible; check the back seat before you get in; lock your car when you park (if you have an older vehicle whose doors do not automatically lock, manually lock them yourself; while at a drive-through ATM, keep your vehicle in drive, not in park; keep track of your keys; never leave your engine running when you go in a store; and stay alert while driving.  No car is worth your life; if it seems like the right move, give the guy the keys and get out of there.

Every time you email, or talk on the phone, or text in your car, whether it is moving or stationary, you run the risk of getting carjacked – because carjackers look for an easy target, individuals who seem weaker than the attacker, or who look like they will not resist.

Remember carjacking can occur while on the move; one way is the rear bumper tap.  When you get out to check for damage, a second culprit jumps in your car and drives off.  If you suspect anything, do not get out, but rather drive to the police station or a crowded area before you exit your car.  Another trick is when a “panhandler” puts a $20 under your wiper.  You get out to catch it, a second guy runs up and jumps in the driver’s seat.  Just drive away; the Jackson will still be there later.  Leaving a gap between you and the vehicle to your front when you stop is not only a good deterrent, but gives you room to maneuver if need be.

But what if it just doesn’t look right – that he isn’t interested in the car but in you, or worse your youngsters in the back seat.  What if flight may not be possible?

If you have a gun in the glove box, under the seat or in any other “convenient” location, getting to it during a carjacking probably won’t be a viable option.  A good way to ensure your gun is accessible is to wear it, which is another reason to have a concealed carry license. 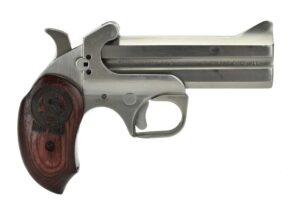 It will be short range, probably 3-10 feet.  Weapon is your choice; I’ve recently extensively fired a Bond Arms, 4.25” barrel, over-under derringer in .410 with various size shot and that looks like a real game-changer.  If you chose to shoot .410 (it can also handle .45 Long Colt — not .45 automatic), go with strait 00 buckshot because sometimes the fancy special defense rounds, that have a larger bullet and some small buckshot with it, seem to have a bad habit with the depth or primer with respect to the Bond Arms’ firing pin.  You only have two rounds, so you cannot afford even one misfire.

Remember all carry locations aren’t equal, especially when seated behind the wheel.  Some drivers prefer cross-draw (front left side for a right-handed shooter) because there are fewer fixtures to foul your draw.  But here’s the rub.  I’ve never visited a gun range where you can practice that – sitting in a car seat, with a loaded weapon on your left hip, cross-drawing it, swinging it upward to driver’s side window level, and firing.  As you know, if you don’t practice something, it may not work under pressure.

What about pepper spray?  You could have that in some easy-to-reach place.  Pepper spray power is measured in Scoville Heat Units, just like peppers you eat – or avoid eating.  The more (5,000,000-plus SHU) the better, but some pepper spray companies “message” the heat rating.  Your best tip is to go to your nearest police precinct, tell them you know that giving your keys to a carjacker and then fleeing would be best for you 98% of the time, but what do they recommend you carry for that critical 2% when your gut says, “this guy is going to kill me.”

And if you want more of a Tiger tank, contact Bulldog Direct (www.bulldogdirect.com) for bullet resistant glass, door panels; it’s an interesting read.