Folks are always asking me what firearms I recommend; I guess they think that since I served in the Army all those years, I probably fired a great number of different weapons.  And, in fact, the service provided me with a wide variety of opportunities, including firing many types of firearms in the U.S. inventory, as well as many used by other NATO countries in Germany during various shooting competitions.  Interest in history led me to examine other weapons used in previous conflicts.  As a cadet at West Point, we were able to check military weapons out of the West Point Museum for a week in almost the same way we checked books out of the library.  I recall my squad leader’s surprise to see a fully functioning MG 42 World War II German machine-gun in our plebe room once!

The first question I ask when quizzed on my opinion concerning various weapons is, “What is the purpose of the weapon you are considering?”  Home defense is obviously different from skeet shooting, hunting or just “plinking.”  Having said that, here is the first installment:

Home/Family Defense.  If you have to ever defend hearth and home, it will probably be at night, when you least expect it, when there is a great degree of confusion and when you cannot afford to get it wrong – and remember what can go wrong, will go wrong.  For this, you need something simple that will incapacitate someone trying to hurt or kill you and that the operation of it will remain easy, even when Adrenalin is pumping through you.  You will obviously need to be very familiar with the firearm, but most people do not have time to religiously go to the firing range and maintain a high level of proficiency, so again, keep it simple.  In my opinion, your choice will boil down to a revolver or a shotgun (over-under, pump, semi-auto or side-by-side barrels.)  Shoot all to find out which works best for you.  For a pistol, I like the Smith & Wesson Model 19, with a 4-inch barrel, chambered for the .357 Magnum, which can obviously also fire .38 Special ammunition (clean it between sessions when using different ammunition.)  It has a kick with .357 Magnum, but not as much as a .41 Magnum, .44 Magnum or something bigger will have.  The .357 Magnum will put the assailant down if you hit him center of mass (in the middle of his chest) and practicing with .38 Special will be a bit cheaper.  Use brand-name ammunition; do not trust your life to cheaper reloads, because one of those might just be the one that does not fire when the firing pin strikes it.  If you are a practiced, skilled pistol shot, then you might want to examine semi-automatics, but for the novice who is not a gun aficionado, stick to a revolver, a Smith & Wesson Model 19, .357 Magnum is a good choice. 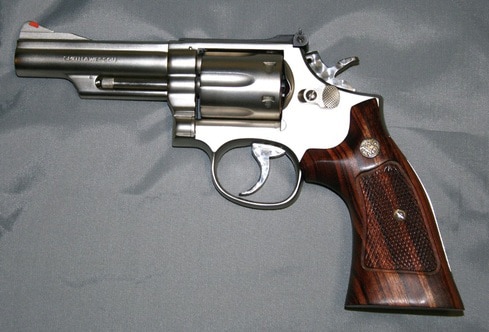 The other route to go is a shotgun.  Keep it simple for self-defense.  Automatic shotguns and pump shotguns are almost-always reliable, but when it has to be 100% reliable, you need a plain old double barrel shotgun, a 12-gauge is best.  It is easy to load and reload, but you need to practice anyway.  Firing shot (which is why they are called shotguns) causes a pattern of smaller projectiles going toward the target, so the odds are increased that a few of them will hit the adversary.  Shot sizes are numerous and reflect what your target is; shot size when shooting skeet or ducks is not the same as a self-defense load.  For self-defense, I would recommend #1 buckshot or #00 buckshot.  #1 has 11 pellets per ounce of shot; #00 has 8 pellets per ounce (i.e., the #00 shot is a little bigger than #1, but there are less of them.)  The number of ounces is based on whether you are shooting 2¾-inch shells or 3-inch shells.  You want a shotgun that can fire either length, so check that before you buy it.  The number of ounces of shot will be written on the box of shells.  A nice weapon is either the Stoeger 12-gauge Coach Gun (which is a side-by-side barrel shotgun) or the Stoeger 12-Gauge Double Defense Shotgun (which is available side-by-side or over-under.)  This model has the added features that you can later add a small flashlight under the barrels or a special sight on the top if you find that helps you aim better (The older I get the more help I need with an aim point.)  See how each style feels to you, how you look down the top of the barrel at the front site and how the break-action works to load/reload it.  Ideally, you would want to try both types at a range, which is easier said than done; find a local gun range and explain what you want to the manager and someone may be able to assist you.  Having fired shotguns for many years now, I am very comfortable with a Browning Maxus 12-Gauge Semi-Automatic, which can really crank out the firepower (and which I will cover in a later update), but that is because I believe that if a malfunction should happen, I could quickly fix that in the dark and keep shooting.  Whenever I go duck hunting with my friends and there’s a Maxus available, I grab it fast.  If you have any doubt, stick with a simpler double-barrel shotgun.  But whatever you end up with, practice, practice and then practice some more…every month if you can carve out some time.

Always remember that when you NEED a home defense weapon it will not be in a calm setting.  Your body will be tense, you need to be able to hit your target in the dark and this is no place to be screwing around; you have to be prepared to kill someone and that is a serious matter that will affect the rest of your life  – but it may be your life or his, so keep it simple.