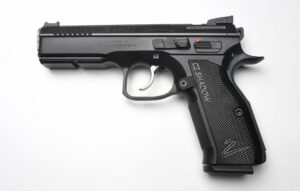 Sometimes in life you owe it to yourself to get the best-of-the-best, whether that is a sports car, guitar, set of golf clubs, pair of binoculars – or a pistol.

Of course, no matter what the item, there will be experts out there that have their own opinion on #1, but most of the time, if those experts put aside their personal biases, they’ll come up with at least a short list from which to chose when you are looking for the very best.

In the firearms category, I may have finally found a pistol – that if it isn’t the best in the world, it certainly is on the short list for that title – the CZ Accu Shadow 2.

First, the bad news…you are going to have to explain to your better half why you just dropped about $2,250 on a piece of steel weighing 46.5 ounces.  To which you will reply that it is 9mm, has a magazine capacity of 17+1 (you can get some after market magazines that hold a little more), has an all-steel frame, a single and double action trigger, a fiber optic front and HAJO rear sight, a cold-hammer forged 4.89-inch barrel, an ambidextrous manual safety, and an overall length of 8.53 inches.

Your better half will reply that the weapon sure feels heavy, and you will respond that to anchor the muzzle in the slide, the weapon has a new ¼ turn 1911 style AccuBushing, that the custom hammer further lightens and smooths the DA and SA trigger pulls, and that the weapon is capable of sub-3” groups at 50 yards.

Again, your better half will point out that you are currently not capable of shooting that precise at any distance and you will reply – “BINGO, that’s exactly the point.  This pistol will challenge me to work as hard as I can to not let its reputation down, and with it I can be as good as I ever have the chance of being.”

Designed for target shooting, it is way too heavy and large to carry concealed for self-defense, unless you are a lineman in the National Football League.  It is not constructed to be a trail gun that you drop in your rucksack for a jaunt through the woods.  Having said that, if you have to make a bullseye on your final shot to win a pressure-packed competition, or have to absolutely ensure a hit against a dangerous animal or murderous criminal for your first shot – with no room to miss or you might die – you want to be pulling this trigger on this weapon.

CZ stands for Česká zbrojovka that translates to ‘Czech armory,’ and dates back to 1936.  The first products out the door were aircraft machine guns, military pistols, and small-bore rifles.  The Germans, who have always known a thing or too about firearms, forced the Czechs to continue producing CZ pistols after overrunning Czechoslovakia just before World War II.  After the war, the Soviets forced Eastern Europe to join the Warsaw Pact and for decades soldiers armed with CZ-75s faced other soldiers armed with Colt 1911A1s – and both sides felt confident about their chances, which they should have been.  CZ-USA is the exclusive US importer, importer of rifles and pistols from CZ.  CZ-USA puts the final touches on a CZ Accu Shadow 2.

In one of the most fascinating ironies of the former Cold War, the Czech Republic joined NATO, and in May 2021 the Czech-based parent company of CZ, CZG in Prague, completed the purchase of famed US arms company Colt after securing regulatory approvals in Canada and the U.S.  CZG picked up a 100-percent stake in the historic Colt’s Manufacturing Company as well as its Canadian subsidiary, the Colt Canada Corporation.  The sale reportedly involved $220 million cash and the issue of just over 1 million shares of common stock.

So what are you waiting for?  If you don’t buy a CZ Accu Shadow 2 for yourself, who will?