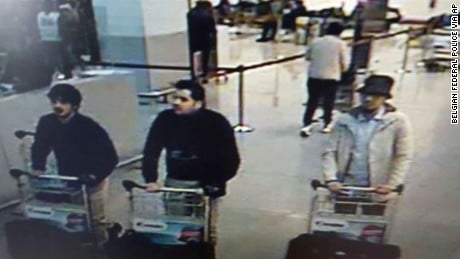 Terrorists in Brussels airport moments before detonating their bombs

Not sure how many of these mass-casualty terrorist attacks the world in general, and the United States in particular, have to withstand, before the people rise up and demand that their leaders take effective action to stop them.

I am also not sure that insanity is doing the same thing over and over and expecting a different result, but I do know that it is pretty stupid and almost guarantees that your opponent — be that in a sport, or at the national security level — will probably defeat you.

A whole lot of Americans are getting pretty much tired of the political correctness that suggests that these terrorists are misunderstood; that it is our fault that they attack us; that we must not take drastic measures to defeat them, or they will have won.  These pathetic attempts have not proven effective and we now have a major terrorist attack almost every month.  Fort Hood, Boston, Chattanooga, San Bernardino, Paris and now Brussels have entered our lexicon as locations of mayhem and death.  Before, most Americans associated Belgium with waffles; now they link it to terrorism and murder.

The Europeans may be beyond salvation in this fight, unfortunately, because their populations have ceded way too much power to their own national governments, and on top of that have tried to pound a square peg into a round hole in submitting to an “uber-government” called the European Union.  If you understand that the further away from the people a government is, the less it will respond to the people’s wishes, why in the world would anyone think that a governing body higher than the federal level would be of greater assistance to the average man in the street?

It is also obvious that we have had a crop of too many military leaders who were more interested in appearing sophisticated thinkers and Georgetown party-goers than they were interested in kicking ass on the battlefield, but that is what you get when you attempt to conduct years and years of political and social experimentation with your military.

Having said that, we here in the United States may have one last opportunity to preserve our sovereignty and way of life against an enemy that has been an anathema to our ideals for over a millennium.  Without getting too far into the weeds, and not hearing any coherent plan from our current crop of political hacks, let me offer the following three-tier strategy.

“Point of the Spear”: take the fight to the terrorists.  Intel agencies (like the Central Intelligence Agency, the Defense Intelligence Agency and the National Security Agency, etc.) combine with the military, and the other elements of power for offensive operations outside the US to not just defeat but eradicate the threat.  Design rules of engagement to enhance our forces’ ability to find, engage and destroy the enemy, whether that is active terrorists, or those who provide haven, logistical support, or morale support.  If you support the terrorists, you may find yourself part of what is called collateral damage.  Deny the enemy safe haven anywhere in the world by offensive action and my linking a foreign country’s relationship benefits with the US to the aggressiveness that country deals with terrorists inside its borders.  This fight is not designed to nation-build, as that would put US forces on the ground in one area for a protracted time, when what we want is a quick re-cock and the flexibility that provides; it is aimed at dismembering the terrorist organizations and personnel of those who would attack us.

“Not in our house”: defend the actual homeland.  Law Enforcement (the Federal Bureau of Investigation, state, local police) and permissible intel (intelligence agencies that are allowed by law to operate inside the US) prevent attacks, and when that is not done, responding rapidly to an attack.  Homeland Security and the State Department limit the influx of potential/actual terrorists into the country by protecting the border and effectively screening who attempts to get in, by using the simple and logical rule: when in doubt, keep them out.  Use effective profiling techniques unfettered by political correctness, to identify threats especially among those individuals who demonstrate an unwillingness to assimilate into American culture.  And we need to come down hard, by passing laws that make a life in prison without parole sentence the most frequent outcome for anyone convicted of taking an active part in a terrorist attack (or providing material support to terrorists be that money, intelligence, sheltering, etc.) whether that is a foreign terrorist or an American citizen that perpetrates those actions abroad or here at home.

“Goal Line Stand”: harness the inherent courage and initiative of the American people as individuals, who when faced with a threat take immediate action such as the passengers in Flight 93 to eliminate or reduce the effects of that attack.  Support of the 2nd Amendment, even expanding it if necessary, and the encouragement of concealed carry by law-abiding citizens.  Support efforts at community policing in Arab and Muslim enclaves in the US.  Reduce gun-free zones that now just invite attacks.  Establish laws to indemnify citizens who respond in good faith to terrorist attacks.  A good last line of defense can overcome temporary power-brokers in Washington who make bad decisions — be they incompetent or dishonest — as well as foster the key goal that we are all in this together.

Every anti-terrorism effort must fall into one of these three defensive tiers or they are a waste of time and money; that is called unity of effort.  Our society needs to marginalize those who would commit national suicide by tying the nation’s hands behind its back.  Terrorism is here and not going away any time soon unless we circle the wagons and unify in the effort to defeat it. 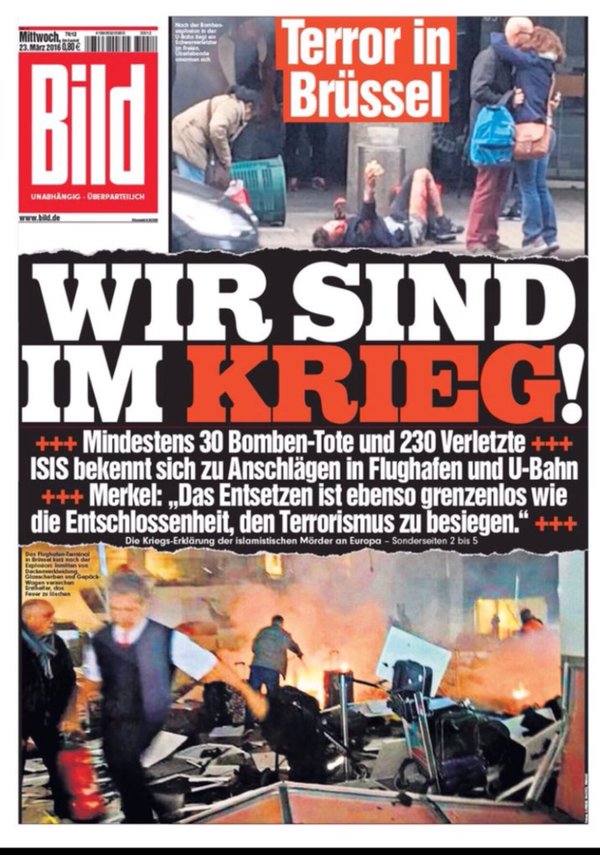 “We Are at War” headline in German magazine