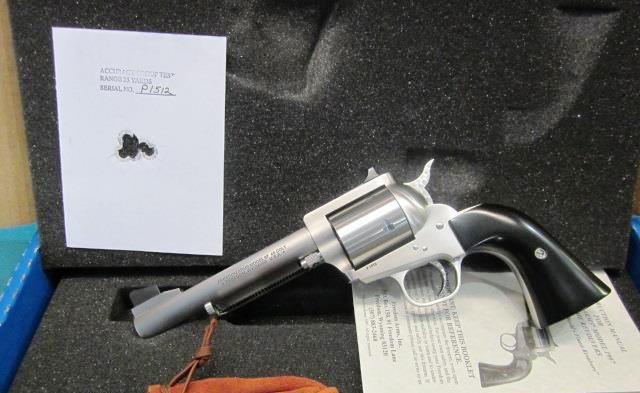 “If we couldn’t build a better gun than the rest of the industry, we wouldn’t stay in it.”

When you get to be my age, you appreciate quality.  My wife of 37 years has attained absolute perfection, for example.  My close friends all deserve to be best friends and we all count on each other through thick and thin.  I always wanted a Jeep Wrangler with a World War II Army green paint scheme, so one sits in the driveway as I write this; it is our only vehicle.  On an unaccompanied Army tour to Germany, I skimped and saved enough to buy a set of Zeiss binoculars.  The same feeling goes for firearms.  It is flat amazing shooting a Shiloh Sharps .45-70 rifle, a Smith & Wesson Model 627 .357 Magnum revolver and a Walther PPQ M2 .45 ACP.  The same experience happens with a Johann Fanzoj combination 16 gauge shotgun over a 7X57R Mauser rifle, made in 1962 in the Ferlach valley of Austria, or with a similar “drilling” made by master gun producer Ludwig Borovnik at the same location (and which you can read about on this website as well.)

Freedom Arms revolvers have a well-deserved reputation as the Rolex watches of single action revolvers and while I thought I understood that comparison, until I extensively fired one I did not realize just what fine machines they are.  Built of space-age stainless steel to remarkably precise tolerances for production pieces, they are extraordinarily durable and accurate.  Parts are machined in batches; more complicated parts are made in smaller batches.  Once all the batches are completed and the all the parts for a model are ready, the highly-skilled Freedom Arms machinists put the revolvers together by hand.  Then, other experts assemble the revolver and test it for accuracy at 25 yards – think a shot group as small as a dime to a quarter.  You’ll get the actual group shot with your weapon when you buy it. 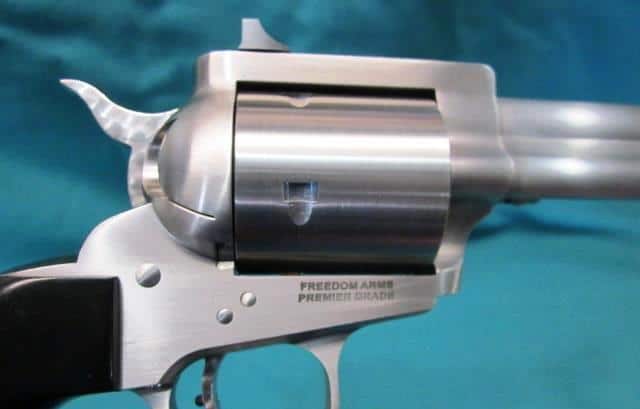 Then the pieces go to the finishing room.  The exterior finish is just as precisely made, with polishing that is the envy of the industry.  While stainless steel heat-treated in the 45 R(C) hardness range is almost impervious to the elements, it is also almost “invulnerable” to classic bluing, engraving and color hardening.  Tolerances are extremely fine.  Some reviewers compare the movement of the trigger, hammer and cylinder to the locking mechanism of a bank vault.  Being an old Army guy, I would use a different comparison and just say that the action reminded me of the breech block locking in a 120mm cannon in an Abrams tank, just before the round is fired down-range at a speed of about a mile per second. 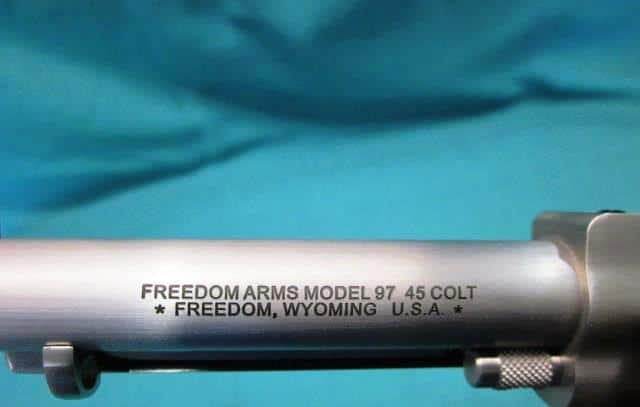 Finish on the Freedom Arms revolvers is excellent

Freedom Arms really geared up in 1978, under the direction Wayne Baker and Dick Casull, of  with the Model 83 chambered for the .454 Casull pistol cartridge, which for a while was the most powerful handgun cartridge in the world.  The company expanded the range of its offerings from the ubiquitous .22 Long Rifle to the monster .500 Wyoming Express and filling in with many hi-performance revolver round in between such as .475 Linebaugh, .44 Magnum, .41 Magnum and .357 Magnum.  In what one reviewer called the “thermo-nuclear calibers,” the pistols are “cold, calculating, killing machines.  If you suffer from a terminal case of the wheel-gun warm-and-fuzzies, they may not be for you.” 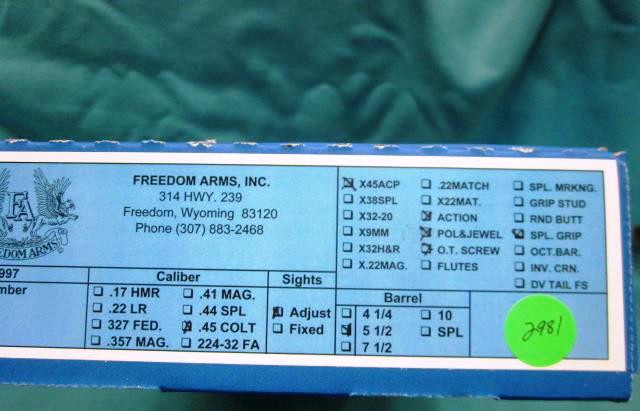 The box tells you exactly what options are on this firearm.

In 1997 Freedom Arms may have sensed this feeling and introduced a down-sized, handier version of the Model 83 chambered for high-demand cartridges such as the .17 HMR, .22 Long Rifle, .327 Federal, .357 Magnum, .41 Magnum, .44 Special and .45 Colt.  Known as the Model 97, in the last twenty years this model has compiled an enviable record both in the field and on the range.

Determining how many revolvers the company [307 883-2468] produces is a difficult proposition.  Waiting times after ordering can last in the vicinity of one year.  A BATF report of revolver production for the company in 2007 was 376; the BATF in 2012 reported that Freedom Arms manufactured 404 revolvers for the year. For 2015, the total had risen to 499 revolvers.  Think about that for a minute.  There are approximately 262 work days per year.  So for all practical purposes, the men and women at Freedom Arms make only two firearms per day.  Production by caliber, of course, is even smaller.  My guess is that the company may produce only twenty-five Model 97 Colt .45s because, in my opinion, the monster calibers, such as the .454 Casull, probably take the lion’s share of production.

That is what I fired, a Model 97 in .45 Colt.  This particular example has a 5.5-inch barrel, overall length of 10.75 inches, adjustable sights (with an interchangeable gold bead front sight,) black Micarta grips, and a factory trigger/hammer adjustment to a three-pound pull, all weighing in at 2.29 pounds (36.64 ounces.) This configuration gives the firer a sight-radius of 6.75 inches; for reloaders, the barrel twist rate is 1-24 (the number of inches the bullet moves along the bore while the bullet rotates one full turn, in this case 24 inches.)  It also had an additional .45 ACP cylinder, that like the .45 Colt cylinder, is line-bored in which the frame and barrel are assembled, and then a cylinder “blank” is fitted.  That is then drilled out for each bore through the barrel.  As a result, the alignment between each chamber and the barrel is absolutely perfect; in fact each cylinder is marked with the same serial number as the frame, so you know the exact pairing that should be made.

My first impression was that the Model 97 .45 Colt is a “blast” to shoot.  The big bullets make big holes in the paper targets.  They should, as anything over 218 grains is over half an ounce of lead.  The recoil pushes more than it snaps the hand; the trigger guard did not slam back into my fingers.  The second impression is that this firearm will expose batches of ammunition that lack consistency.  Using a sandbag rest, the firer will instantly be able to assess which factory rounds are consistent in powder quality and quantity, and also the flight dynamics of the bullets themselves.  It can be a harsh verdict and with more than one factory load on that first day and days since that I concluded that I was not going to waste my time or money on firing rounds which were inferior to this revolver’s capability; and for this .45 Colt, the 25-yard accuracy shot group as tested at Freedom Arms was just 0.68 inches center-to-center (shown in top photo.)

As mentioned, you will wait several months after ordering.  If you just cannot wait that long, Gunbroker.com usually has several dozen Freedom Arms on auction at any one time. GunsAmerica.com and GunsInternational.com have dozens more for sale, often by regional Freedom Arms FFL-holders who serve as dealers.  Two of these that usually have a wide selection of Model 83s and Model 97s are First Stop Guns in Rapid City, South Dakota (605) 341-5211 and SMJ Sports (owned by Steve Bredemeyer) in Columbia City, Indiana (260) 396-2349.  I drove 275 miles each way to visit Steve and he patiently showed me several 83s and 97s in a variety of calibers.  If you wish to purchase one of these new pistols – and I’d like to meet the shooter who declines after actually holding one of these masterpieces – Steve will promptly ship it to your local FFL location.  Instead of a year, you’ll be pulling the trigger in six days.

I do not hunt with a revolver, although it seems to me that this .45 Colt would make a great wild pig weapon.  It packs easily and could be used in a pinch for self-defense – the caliber being more than sufficient to drop an attacker with one shot to the center of mass – although considering the five-round cylinder and carrying with the hammer over an empty cylinder gives you only four rounds.

I’ll update this as I find the rounds that work best.  After firing twenty-five of each of the seven factory rounds mentioned above, the Sig Sauer Elite Performance V-Crown 230 grain Jacketed Hollow Point bullets and the Ultramax with 200 grain Round Nose Flat Point bullets showed the most promise for accuracy.

If it turns out that hand-loads are far superior, that’s what friends are for and I hope they won’t mind loading for me, especially if I let them shoot this great pistol.