In the Land of the Blind, the One-eyed Man is King 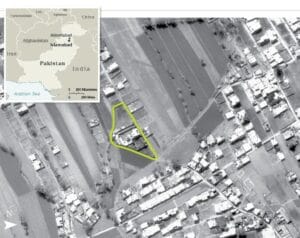 Osama bin Laden’s Compound — A Good Use of Satellites

In the Land of the Blind, what if a few men had a billion eyes?  What would we call them?  Well, we’re about to find out.  In one of my old jobs, I used to surf the net and pick out 20 articles per week, copy them, put them in seventeen binders and provide those binders to the Secretary of the Department of Homeland Security, the Administrator of the Transportation Security Administration, the Commandant of the United States Coast Guard and fourteen other folks around Washington, DC.  All the articles were “open source” – unclassified – the key was knowing where to look for pieces of information they needed to make decisions, and probably wouldn’t get this info from their subordinates who processed data in traditional Washington ways, where sometimes the boss doesn’t find out what’s going on.  Think Swamp.

Nowadays, sometimes I go geeky and surf around like the good old days, and I found this article from the Massachusetts Institute of Technology (MIT) which is full of geeky folks researching geeky things.  Its about satellites; how there are at least 768 commercial ones up there zooming around; how US federal regulations limit images taken by commercial satellites to a resolution of 25 centimeters, about the length of a man’s shoe; how their orbits pass over every place on Earth sometimes 15 times a day.  Then it discussed a company called BlackSky Global that promises to have their satellites fly over most major cities up to 70 times a day.  As MIT says: “That might not be enough to track an individual’s every move, but it would show what times of day someone’s car is typically in the driveway.”

Now go to Google Earth Pro.  Type in your address, and voila you’ll see your house from above.  But what is really interesting is it has a feature that shows you the overhead views beginning many years ago.  Look to see how the resolution gets better over time; what you couldn’t see in 1995, you sure can see in 2010; and what you couldn’t see in 2010, you can see now; that evolution isn’t going to stop.

That’s just commercial; military and national intelligence satellites (ours and other nations) have resolutions and linked recognition software that make commercial satellites seem tame.  In an open source, US astronomer Clifford Stoll,  former systems administrator at Lawrence Berkeley National Laboratory, remarked that a really good satellite platform, orbiting at 155 miles up, could have a resolution of “a couple of inches.  Not quite good enough to recognize a face.”  But that disclosure was several years ago, and technology always marches on.

That’s just satellites.  What about ground imaging cameras?  Well, it is estimated that by the end of this year, there will be 1 Billion ground imaging cameras on Earth.  That is one camera for every eight people.  You may well have some in your home security system, or the trail cameras you set up to spot that Boone and Crockett Club record buck you just “know” is out there.

However the revolution in electronic security is not in image producers; it is in image interpreters – the artificial intelligence (AI) systems that are lashed up with the cameras.  Let’s look at the Chinese, pardon the pun.  The security system for the city of Guiyang, about 3,500,000 people, has the image of every single resident.  The cameras read faces, and the AI estimates age, gender, and ethnicity and matches every face with an ID card that every Chinese must have.  Chinese engineer Yin Jun says that the system can “trace all your movements back one week in time.  We can match your face with your car…match you with your relatives and the people you’re in touch with.”

A recent exercise, monitored by the BBC, took seven minutes for the system to identify and surround a new visitor to Guiyang.  But it gets better.  It appears that AI now includes Emotion Recognition to track traits such as facial muscle movements, vocal tone, and body movements in order to infer a person’s feelings.  Perhaps that could be used to incarcerate a person before they commit a crime – arresting them for their thoughts!

A few months ago, we attended a wedding held outside.  During the service, I heard this buzzing above my head.  Thinking it was a hornet, I looked up, but it was a small drone taking photos of the wedding, mine included.  Then I wondered: what else is up there, so high no one would ever know it is there, or its purpose?  Was it also looking at me?  Does it know my name?  Does it know what I am thinking?