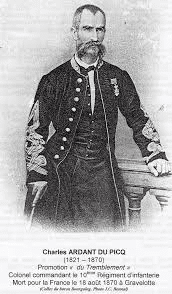 Many students at the National War College – and even a few folks today – have asked me who my favorite military theorist is.  Many scholars of military history, strategy and politics have heard of Carl Clausewitz and Sun Tzu and both were indeed influential thinkers.

Carl Clausewitz was a German officer and military theorist in the early 1800s, who stressed the moral and political aspects of war; we would say today that this included the psychological aspects of warfighting. His most notable work, Vom Kriege (On War), has been studied by thousands of military officers around the world; ironically, the book was unfinished at his death and may have been completed by his wife.  He stressed the dialectical interaction of diverse factors, noting how unexpected developments unfolding under the “fog of war” (i.e., in the face of incomplete, dubious, and often completely erroneous information and high levels of fear, doubt, and excitement) call for rapid decisions by alert commanders.  These special commanders were said to have a finger-tip feeling for war.

Clausewitz also discussed the relationship between three elements that later became known as “Clausewitz’s trinity.”  These are “composed of primordial violence, hatred, and enmity, which are to be regarded as a blind natural force; of the play of chance and probability within which the creative spirit is free to roam; and of its element of subordination, as an instrument of policy, which makes it subject to reason.”

Clausewitz also wrote at length about the concept of center of gravity.  This process was to identify the enemy’s hub of all strength, in other words, what characteristic or element led him to victory.  It might be a strong alliance in support; it might be the enemy’s ground forces, etc.  Very rarely was the enemy’s center of gravity a single person or leader, although many intelligence efforts in the past focused on eliminating that one “indispensable” person.  The U.S. was caught in that trap when Seal Team Six killed Osama Bin Laden and many high-ranking leaders opined that this was the end of Al Qaeda; of course we know it was not.  Whenever you see a politician, or a senior military leader for that matter, not address the center of gravity of the enemy, you know that you are listening to a rank strategic amateur, regardless of his pay grade.

Sun Tzu was a Chinese military general, strategist and philosopher who lived in the Spring and Autumn Period of ancient China, about 500 BC.  He is traditionally credited as the author of The Art of War, an extremely influential ancient Chinese book on military strategy.  Sun Tzu has had a significant impact on Chinese and Asian history and culture, both as the author of The Art of War and as a legendary historical figure.  The Art of War presents a philosophy of war for managing conflicts and winning battles and is accepted as a masterpiece on strategy, frequently cited and referred to by generals and theorists.

The work very succinctly presents the tenets for developing and executing a strategy that will defeat the strategy of your opponent.   It is presented in lists and recommendations such as: “All warfare is based on deception. Hence, when we are able to attack, we must seem unable; when using our forces, we must appear inactive; when we are near, we must make the enemy believe we are far away; when far away, we must make him believe we are near.”

While both these theorists have been extremely influential in modern history (and for Sun Tzu much longer), and while I have re-read each numerous times, my absolute favorite military theorist is Colonel Ardant Du Picq, a French Army officer and military theorist of the mid-nineteenth century whose writings – as they were later interpreted by other theorists in the First World War period – had a great effect on French military theory and doctrine.

Ardant du Picq was born at Périgueux, France on October 19, 1821.  On 1 October 1844, he graduated from the École spéciale militaire de Saint-Cyr, the French equivalent of the U.S. West Point and was commissioned a sub-lieutenant in the 67th Regiment of the Line.  As a captain, having previously transferred to the 9th Battalion of Foot Chasseurs, he saw action in the French expedition to Varna during the Crimean War, but he fell ill with cholera and was evacuated to France. Upon recovery, he rejoined his unit in front of Sevastopol and was captured during the storming of the central bastion of the fortress in September 1855.  Released in December 1855, he returned to active duty, first with the 100th Regiment of the Line and later as a major with the 16th Battalion of Foot Chasseurs.  He later served in Syria from August 1860 to June 1861, during the French intervention to restore order following Maronite-Druze sectarian violence.

Du Picq saw extensive service in Algeria from 1864 – 1866, and in February 1869 was selected colonel of the 10th Regiment of the Line.  At the outbreak of war with Prussia on July 15, 1870, he led his regiment to the front.  Directing his men along an elevated road on August 15, 1870, an overhead burst by a Prussian artillery shell fatally wounded him in both thighs and his stomach near Longeville-les-Metz.  He died four days later at the military hospital in Metz from his wounds.  Ardant du Picq’s last words were, “My wife, my children, my regiment, adieu!”

Before his death in 1870, du Picq had already published Combat antique (Ancient Battle), which associates later expanded into the classic Etudes sur les combat: Combat antique et moderne, most often referred to by its common English title of Battle Studies, which was published in part ten years later, although the complete text did not appear until 1902.

His analyses stressed the vital importance, especially in contemporary warfare, of discipline and unit cohesion.  Du Picq believed that the human element is more important than theories.  War was still more of an art than a science.  One popular quote demonstrating this conclusion drawn from numerous battle studies stated, “Nothing can wisely be prescribed in any army… without exact knowledge of the fundamental instrument, man, and his state of mind, his morale, at the instant of combat.”

Du Picq also thought that great strategists and leaders of men are marked by inspiration. “Generals of genius draw from the human heart ability to execute a surprising variety of movements which vary the routine; the mediocre ones, who have no eyes to read readily, are doomed to the worst errors.”

All of du Picq’s thinking, in my opinion, boils down to one of his fundamental truths:

“Four brave men who do not know each other will not dare attack a lion.   Four less brave, but knowing each other well, sure of their reliability and consequently of mutual aid, will attack resolutely.”

Training, discipline, bravery, teamwork, independent action – everything a young leader needs to know to create a successful organization can be found by reading Ardant du Picq.