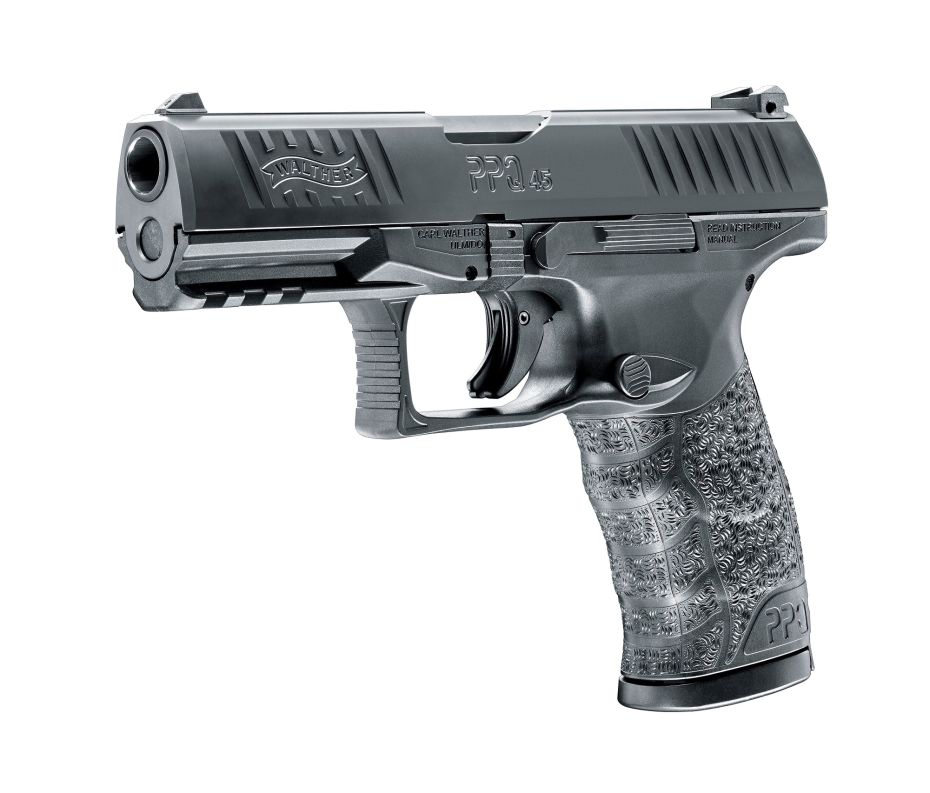 Designed by Herr Horst Wesp (who joined the firm in 1994) the weapon is made by one of the historically best – if not the best – German armaments firm, Carl Walther in the city of Ulm an der Donau (which translates to Ulm on the Danube River.)  PPQ stands for Police Pistol Quick Defense, PP being in German “Polizei Pistole” – a term first used on a Walther weapon in 1929 and going strong for almost ninety years.  Remember, the Germans make great cars, great optics, great toys and great weapons; you can’t go wrong here.

Designed initially for European police forces and in selected militaries (if I had to guess, I believe that our own special operations community is at the very least testing the Walther PPQ M2 .45 ACP and maybe even already using it,) let me tell you what it really can do for you: protect you from simultaneous multiple attackers, all intent on killing you.  Here is how it does that:

Accuracy: I am a decent marksman, but you are undoubtedly better.  Let’s just say that I am pushing Social Security age and that Ray Charles was a better marksman in The Blues Brothers.  After firing one hundred rounds to become familiar with the pistol, I was able to put all twelve rounds of a magazine into the ten-ring on the B27Q-Blue-Half-Size Police and FBI Training Qualification Practice Target at a range of fifteen feet.  At thirty feet, I am able to put six (50%) of the rounds into the ten-ring.  With practice you’ll be able to meet or exceed this because the Walther PPQ M2 .45 ACP is a natural pointer and has an excellent 3-dot sight system.

Power: It’s a .45 ACP.  What else needs to be said?  For those into numbers, the 4.25-inch barrel will launch a 230-grain Winchester PDX1 Defender jacketed hollow point at 912 feet per second that results in 425 foot-pounds of muzzle energy.  Tests in ballistic gelatin that I have read show this same round expanding to .80 inches, and there are a lot of other excellent rounds that have similar results.  Now I sometimes get confused reading these tests as to how many layers of denim the bullet has to travel through to achieve certain expansion, but one thing I am sure of – the minimum diameter a bullet fired from the Walther PPQ M2 .45 ACP, through any number of layers you want, is going to be .45 inches.

Speed: The Walther PPQ M2 .45 ACP, like its 9mm and .40 caliber brothers, has no external hammer.  Instead, it uses a striker-fire trigger system (also described as a partially cocked single action) in which the initial shot feels like a double action trigger pull (about four pounds,) while for subsequent shots the trigger pull is short, crisp – and fast.  Those follow-on shots feature a trigger pull of a tenth of an inch and equate to a 15.7 ounce pull.  Speed is also enhanced by negligible recoil, so you stay on the targets.  The frame is polymer, but the slide weighs almost a pound and since it moves backward upon firing, it eats up felt recoil.  Less recoil is better.

Tailorability: Every shooter is different and each has special needs and wants.  The Walther PPQ M2 .45 ACP comes with two size, easy to install backstraps to accommodate different hand sizes.  The button magazine release can be changed from the left to the right side of the frame to correspond to a left handed shooter.  The trigger guard is large enough so the shooter can where a glove in colder temperatures.  There is a small built in rail forward of the trigger guard from which you can add a laser sight or a flashlight.

The Walther PPQ M2 .45 ACP is fun to shoot.  Recoil doesn’t bang you around and the 12-round-capacity steel magazines mean you don’t have to change them too often.  More importantly, a weapon that is fun to shoot means you are likely to put in the practice required to fulfill the weapon’s intent and that is self-defense.  Multiple common criminals, read street gangs, involved in a single incident are not that rare.  And ISIS or ISIL, or whatever we are calling this deadly militant Islamic jihadist group these days, has already said that they were going to attack inside America.  That has already happened at Boston, Fort Hood, Chattanooga and San Bernardino.  In half of these attacks, there have been multiple assailants.  In the hands of a capable shooter – you, if God forbid, are in the attack zone – the Walther PPQ M2 .45 ACP can get you out of a multiple assailant attack in one piece.