John Ryan’s Discharge, back side

Captain Thomas H. French hand-wrote the campaigns on which First Sergeant Ryan participated including the Yellowstone River Expedition in 1873, General Custer’s Black Hills Expedition in 1874 and at the Battle of the Little Big Horn on June 25th and 26th.  Ryan returned to the Boston area and became a police officer for several decades. 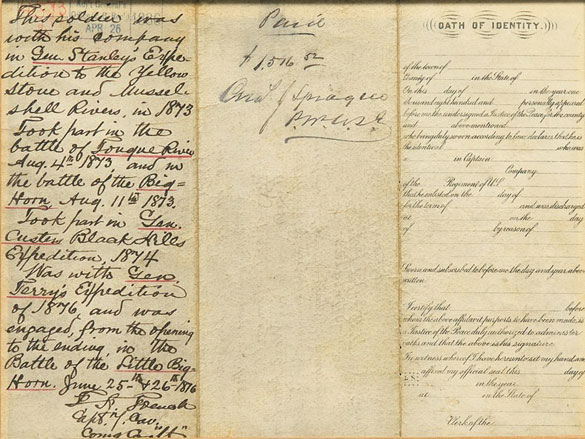 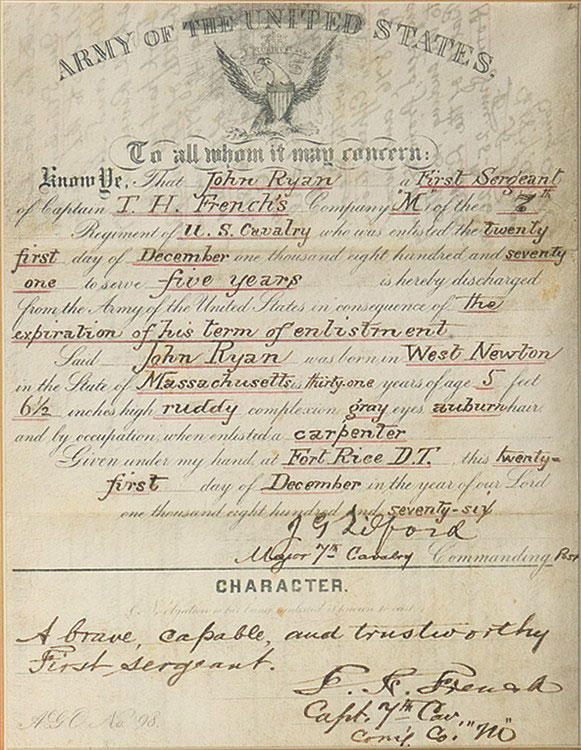 “Frenchy” served on the advance guard for Reno’s detachment and complained about the high speed the unit was charging.  He survived the battle, serving early on Reno Hill as a water carrier – a feat that earned others the Medal of Honor, but no one in Company M received an award.  The following year, “Frenchy” received a major wound to an ankle and his foot had to be amputated.  This picture shows him in his later years with part of his family. 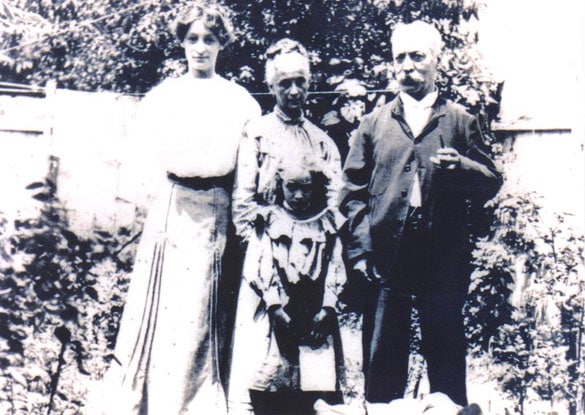 A coal-miner from Pennsylvania, Pigford fought in the battle and survived.  He claimed he went forward from Weir Point and saw the final minutes of Custer’s destruction, but this claim cannot be verified. 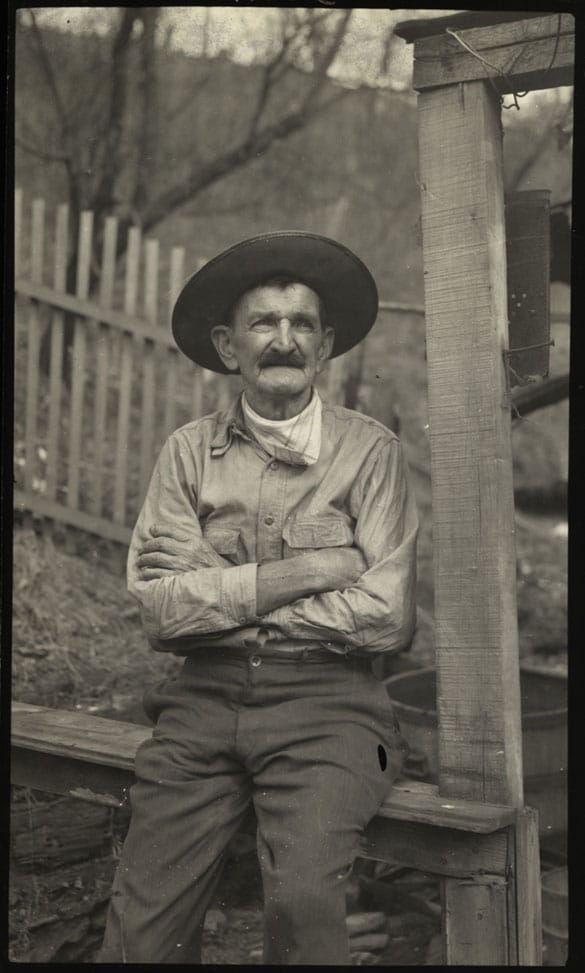 Morris was a real scrapper in the company and did not take well to discipline, so much so that he was discharged as a private of “worthless character.”  Morris went back to New York City, attended law school, became a ward boss and finally was appointed a municipal judge! 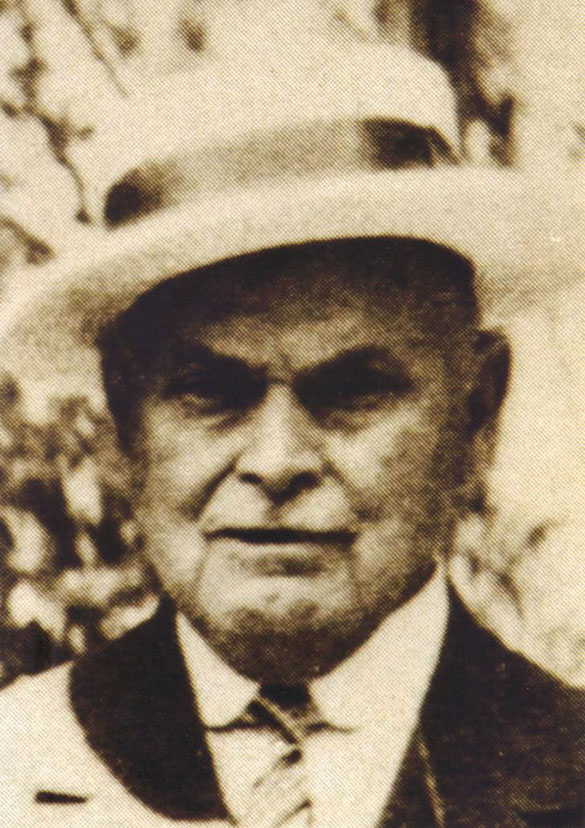 This photo was taken in 2009 from Company M’s position on the skirmish line in the Little Bighorn valley.  The line of large bushes is at what was then known as the timber line.  After Company A and Company G hastily pulled off the skirmish line, leaving Company M alone to face the increasing number of warriors, Captain Thomas French and First Sergeant John Ryan conducted a fighting withdrawal to the timber line, saving the company from destruction. 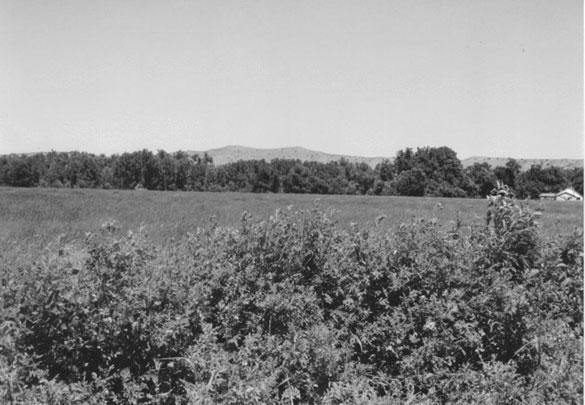 Several accounts of the battle stated that soldiers experienced weapon malfunctions when the copper bullet cartridge expanded after firing and would not eject.  This expended cartridge shows scarring, where a soldier used a knife to remove it from the chamber, an act that would not have been necessary with a fully functioning weapon. 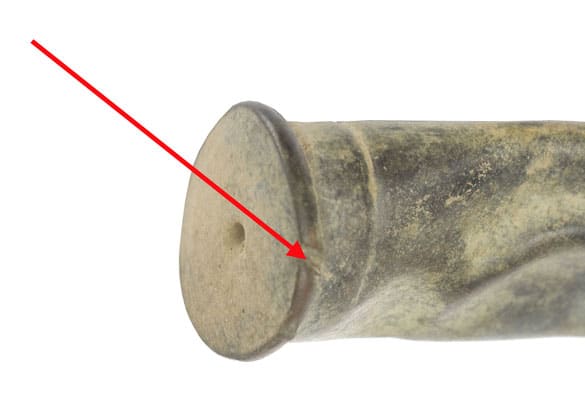 First Sergeant Ryan purchased a special hunting rifle from a gunsmith in Bismarck, Dakota Territory and took it on the Little Bighorn Campaign.  An expert marksman, Ryan was assisted by the special site on top of the Sharps .45/70 rifle, similar to the rifle pictured here.  First Sergeant Ryan probably dispatched three warriors at long range during the fight with this weapon. 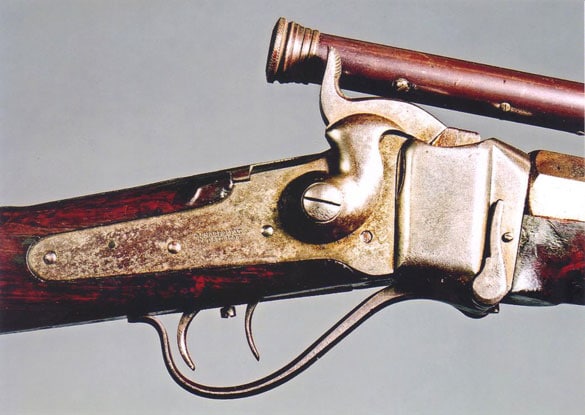 As the First Sergeant, John Ryan was the senior non-commissioned officer in Company M.  While Captain Thomas French was the company commander, in garrison First Sergeant Ryan ran the show and also played a major role in combat. 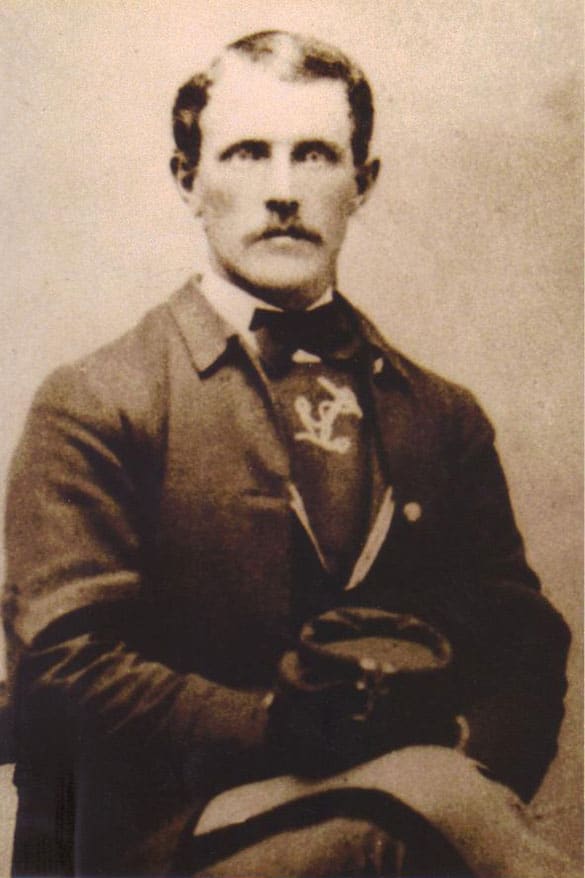