Till is a 2022 American biographical drama film that had its world premiere on October 1, 2022 at the New York Film Festival and will be released in the United States on October 22, 2022, by United Artists.  It obviously hasn’t reached Decatur yet, but looks like it is a very good movie, although the subject is a pretty rough one.  The two main characters are Emmett Till, age 14, and his mother Mamie, who is played by Danielle Deadwyler, and if she doesn’t get an Oscar for her performance they just ought to do away with the award.

That’s because she plays a lady who has just had her son brutally murdered.  They live in Chicago and Emmett asks her if he can go visit Mississippi to visit family.  She agrees, and he never comes home alive.  There is no reason to spoil the show by recounting all the details.  If you can’t wait, read Emmett Till: The Murder That Shocked the World and Propelled the Civil Rights Movement, by Devery S. Anderson.

For everyone who thinks that history began the day they were born, and given the median age in the US is roughly 38, that means half of us start our personal view of history in 1984 and before that, Who cares?  But you should care, because this incident was a major factor that propelled the modern US Civil Rights Movement, which led to Reverend Martin Luther King, all the way up to today.

As you will see in the movie, after Emmett is killed and his remains are returned to Chicago, Mamie has a terrible decision to make — at the funeral should the casket be open or closed?  Families all across the country have to make similar decisions for their loved ones.  But it usually does not involve the remains of a 14 year old, and the remains are usually not so mutilated that it is hard to determine who the person is.  It is not a decision that the mother of a 14 year old should ever have to make.  But Mamie had to make it.

Mamie could not have been faulted for deciding on a closed casket.  But she chose an open casket — precisely to show the world the brutality that was so shocking, that only an open casket could show its magnitude, the depravity of the crime and innocence of her son, whose life was snuffed out for no reason.

But history has a way of filling in the blanks and a book I wrote The Fifth Field, sheds light on Emmett Till, although I did not realize it until after I conducted the research.  The reason Mamie had to make this decision was that her husband, Louis Till, was not around.

Louis Till was from Madrid, Missouri, reportedly growing up an orphan.  An amateur boxer, he worked at the Argo Corn Company in Argo, Illinois – not far from Chicago.  He married Mamie on October 14, 1940; both Louis and Mamie were eighteen years old.  On July 25, 1941, they had a son, Emmett.  The couple separated in 1942; according to some sources, he had attacked his wife so violently that she defended herself by throwing a pan of boiling water on him.  On July 9, 1942, Till was inducted at Chicago, Illinois – according to a source, it was the Army or jail from a judge, who was tired of Till violating restraining orders.

Fast forward to June 27, 1944 near Civitavecchia, Italy – along the Mediterranean coast northwest of Rome.  Louis, who by now has two court-martial convictions, and four other men, assault and rob a US Navy sailor and then plan and commit two home invasions raping two women and killing another woman.  To make an interesting crime mystery short, Louis and another soldier are convicted of rape and murder, sentenced to death, and hanged at Aversa, Italy on July 2, 1945.  Louis and accomplice Fred A. McMurray were initially buried at the U.S. Military Cemetery at Naples.  Both were exhumed in 1949 and now are buried at the American Military Cemetery at Oise-Aisne, France in Plot E.  It’s a mysterious place and still pretty difficult to get into.  Till’s remains are in Row 4, Grave 73.

In Fighting for America: Black Soldiers – The Unsung Heroes of World War II, author Christopher Paul Moore stated that Mamie said that, although she had received his wedding band and personal effects: “the Army had never told her the cause of her husband’s death.”  That was accurate to an extent; the Army was quite terse with every soldier executed stating only that it was due to “judicial asphyxiation.”

But don’t feel sorry for him.  He was brutal to Mamie; he was brutal to the two women he raped and the third that he killed.  The trial records support the conviction and the sentence, despite what some “experts” opine that all trials of minority soldiers in World War II were racially tinged.  Read The Fifth Field and make up your own mind.

Within these effects, however, was an item that would help Mamie ten years later.  Louis Till’s silver ring, bearing the date “May 25, 1943” and the initials “LT” that he purchased in Casablanca was returned to Mamie.  In 1955, she let Emmett take the ring to Mississippi, and after finding his remains, authorities identified his mutilated body, in part, through the distinctive ring and the initials “LT.”

Mamie Till died in 2003 at age 81.  She was buried near her son in Burr Oak Cemetery in Alsip, Illinois, where her monument reads, “Her pain united a nation.”

See the movie.  Read the book on Emmett Till.  Read The Fifth Field.  You can learn a lot from history.

In many World War II death penalty cases, military psychiatrists, using intelligence tests, found that the accused were substantially below average.  Such was not the case with Private First Class Paul M. Kluxdal.

Born on July 17, 1907 in Merrill, Wisconsin, Kluxdal was a radio operator in his unit, an occupation that required some real skill.  From November 19, 1924 to July 14, 1927, he had served in the Wisconsin National Guard; he also attended the University of Wisconsin for two years.  Prior to enlisting, Kluxdal, who was white, was married and lived in Oak Park, Chicago, Illinois; he was a construction foreman, building commercial chimneys.  His wife worked for the War Department in Chicago; the couple had no children.  Then Private First Class Paul Kluxdal did two stupid things.  For several months, he made threatening statements against his first sergeant.  Then, on August 12, 1944, he shot and killed his first sergeant.  Despite his intelligence, that combination of events would get him hanged.

Master Sergeant John C. Woods hanged Paul Kluxdal at the Seine Disciplinary Training Center on October 31, 1944, Halloween.  And just like some of the scary visions of that holiday, the hanging was botched and it appears that it took eighteen minutes for the condemned man to die.

The Fifth Field analyzes the entire Kluxdal case and its contradictory evidence, as well as the execution (which is also discussed in American Hangman) and you can come to your own conclusion as to what should have happened in this case.

British historian Paul Johnson kindly found this photograph of Paul Kluxdal and sent it to me, so now you can put a face to a name.

Kudos for The Fifth Field

Kudos for The Fifth Field are still coming in and are reaffirming that this book will not only shed a light on one of the last great mysteries of World War II, but might also serve as a focal point for a much-needed national discussion on the future of the death penalty.  The author has received wonderful letters from FOUR United States Supreme Court Justices, the deans of Harvard Law, Columbia Law and Stanford Law Schools, the Chairman of the Joint Chiefs of Staff and the Judge Advocate General of the United States Army.  One of the Supreme Court Justices noted, “I was not familiar with the events recounted in the book.”  One of the deans wrote, “It will reward serious reading,” while another dean added, “I look forward …to learning more about the soldiers you have so tirelessly researched and bring to life their stories.”  On the military side, one General Officer wrote, “This will be very thought provoking,” while a second General Officer opined, “Your demonstrated commitment to the individual lives of Soldiers and the military justice system is truly commendable.”

Perhaps the most poignant comment was made by the child of one of the men who did not come home from the war — one of the 96 described in The Fifth Field.  The descendant, now in old age, said, “God bless you, Colonel; for 65 years, no one would tell me where my father is buried.” 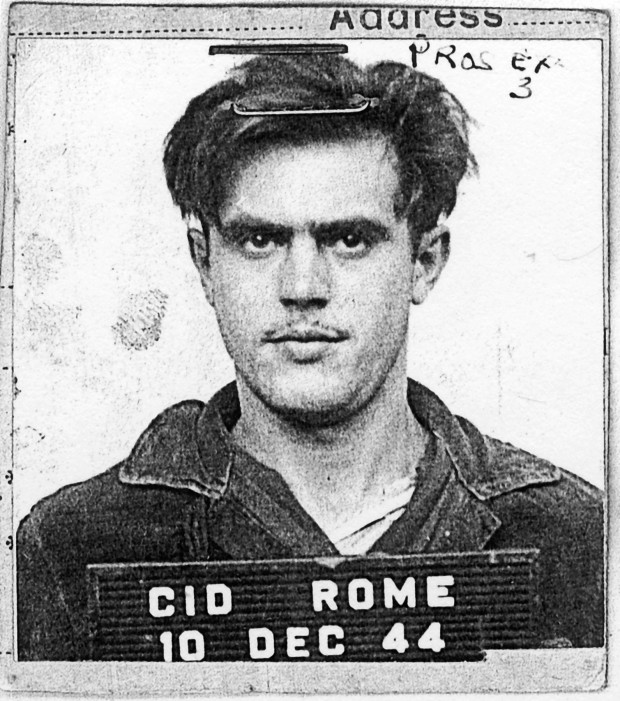 Kudos to David Venditta, Content Editor, The Morning Call in Allentown, Pennsylvania for finding this photograph of Werner E. Schmiedel at the National Archives in St. Louis.

Schmiedel, also known as “Robert Lane,” was the leader of the “Lane Gang” that terrorized Italian shopkeepers and travelers in 1944.

Schmiedel’s crime spree began on September 2, 1944, when he was confined at the Disciplinary Training Stockade near Aversa, Italy.  A white soldier born in Breinigsville, Pennsylvania, he escaped and made his way through war-torn Italy to Sparanise, twenty miles northwest of Naples.  On September 7, he and gang compatriots, Private James W. Adams and Private Anthony Tavolieri robbed an Italian man of 150,000 lire.  The men moved to Formia and robbed two MPs of their pistols and brassards on September 17, 1944.  Later that day, the trio and two other gang members robbed Polish Lieutenant General Wladyslaw Anders’ driver near Capua.

The men then moved to Rome, where on October 10, 1944, they robbed a café and killed a man.  Over the next two weeks, authorities arrested numerous members of the gang around Rome.  Tavolieri died in a confrontation; finally, on November 3, 1944, authorities arrested Werner Schmiedel at “Rocky’s Bar” in Rome. He previously went AWOL from May 20, 1944 to June 2, 1944.  He escaped from the guardhouse on June 13, 1944 and remained at large for three days.  He escaped again on June 21, 1944 and remained absent until June 30, 1944.  On August 19, 1944, a GCM found him guilty of violating the 61st Article of War and sentenced him to twenty years, but Brigadier General Francis H. Oxx reduced the period of confinement to ten years.  In thanks, Schmiedel escaped confinement on September 2, 1944 and his last crime wave began.

After his last crime spree, Schmiedel was convicted by another General Court Martial and sentenced to death.  He was executed by hanging at Aversa, Italy on June 11, 1945. The Army buried Schmiedel at the U.S. Military Cemetery at Naples, the General Prisoner plot, in Grave 2-17.  Exhumed in 1949, Werner Schmiedel is buried at the American Military Cemetery at Oise-Aisne in Plot E.  His remains are in Row 3, Grave 53.