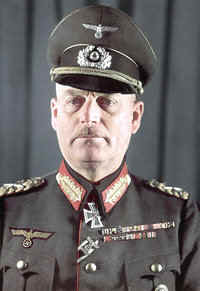 Wilhelm Keitel, Army Field Marshal, born 22 September 1882 in Helmscherode, winner of the Iron Cross 1st Class in World War I, Chief of the Armed Forces High Command (OKW), winner of the Knight’s Cross of the Iron Cross, survived the bomb explosion during the 20 July 1944 attempt to assassinate Adolf Hitler, convicted of crimes against peace, war crimes and crimes against humanity at Nürnberg, executed by hanging on 16 October 1946 at Nürnberg, autobiography In the Service of the Reich published after his death, said to Wilhelm Canaris:

“My dear Canaris, you may know something about military intelligence.  Being a sailor, you surely don’t propose to give us any lessons in strategic planning.” 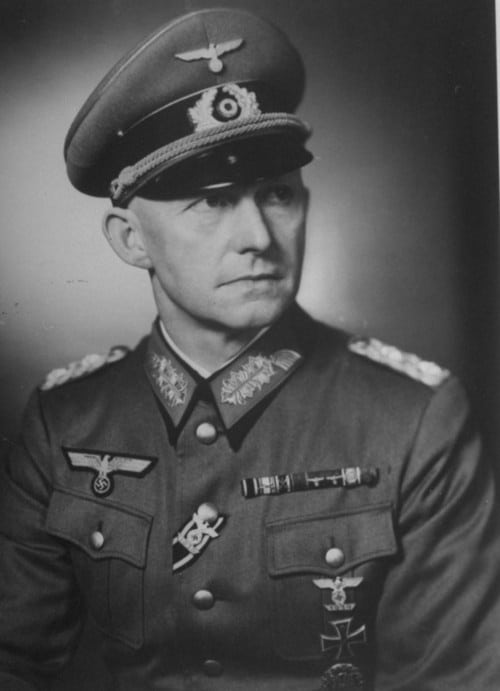 Alfred Jodl, Army Colonel General, born 10 May 1890 in Würzburg, Chief of the Operations Staff of the German Armed Forces High Command (OKW), winner of the Knight’s Cross of the Iron Cross with Oak Leaves, survived the bomb explosion during the 20 July 1944 attempt to assassinate Adolf Hitler, convicted of crimes against peace, war crimes and crimes against humanity at Nürnberg, executed by hanging 16 October 1946 at Nürnberg, said the following concerning loyalty:

“My conception of loyalty is not something to be bought and sold like a banker’s stock.  I wouldn’t greet a man with both hands when he is victorious and start looking for a dagger as soon as his stock looks as if it is going down.  Bankers can do that but not officers.”

The Allies decided that after the execution, the remains of the condemned would be cremated and the ashes dumped into the Isar River, so as to preclude any memorial later be constructed to venerate them.  Jodl’s family placed this marker to remember the general: 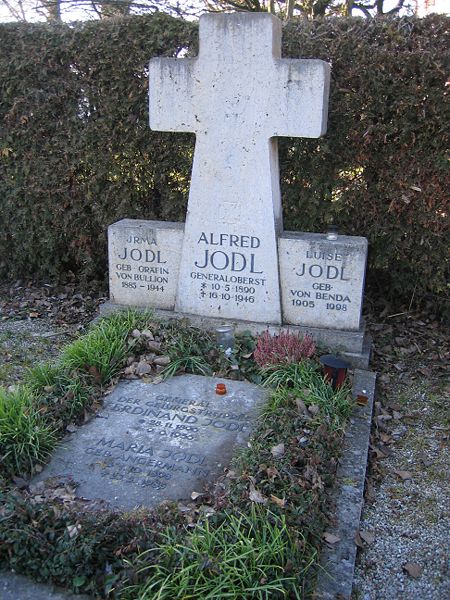 Last Days of the Nazis – New Time and Channel

Last Days of the Nazis, the History Channel

Here’s the latest: History 2 Channel will be airing all 6 episodes on Sunday, May 17th, starting at 6:00 p.m. (Eastern) and going until midnight.

Last Days of the Nazis is a story that has rarely been broadcast on television before.  It is a dark and compelling history of Nazism from a different perspective – that of the Nazis themselves.  In 1945, the Allies rounded up and interrogated thousands of ex-Nazis.  These interrogations became a fascinating, but largely forgotten, part of the historical record.  The six-episode series uses these interrogations to dramatically bring to life accounts by Nazi death camp commandants, Nazi doctors, generals, architects and members of the Hitler Youth.  Albert Speer, Julius Streicher, Karl Gebhardt, Rudolf Höss – these men and many others tell their own stories.  It is an inside look at the minds and motivations of the most evil regime in history.  This is what the enemy said when they were on the wrong side of the interrogation table.

French appears in each episode, with several other historians, to provide commentary and explanation of how these Nazis thought and acted.  He also helped provide extensive backgrounds on these historical figures in the preparation of the series.

Eduard Dietl, Army Colonel General, was born on July 21, 1890 in Bad Aibling.  During World War I, he was a winner of the Iron Cross 1st Class and was wounded three times.  During World War II, he served as commander 3rd Mountain Division and as commander 20th Mountain Army in Finland.  He was a winner of the Knight’s Cross with Oak Leaves and Swords, but died on June 23, 1944 in a plane crash at Mürzuschlag, Austria.  His last words were to the pilot shortly before take-off:  “No, we are not going to fly over the plain.  The clouds are six hundred meters above the ground.  I know the area and am glad to finally be back in my mountains.  I want to see them from above once more.  In Finland, everything is flat.  We will fly from Graz along the valley that goes to Judenberg.  From there we will follow the Semmering trace that goes to Mürzuschlag and from there to Vienna.” 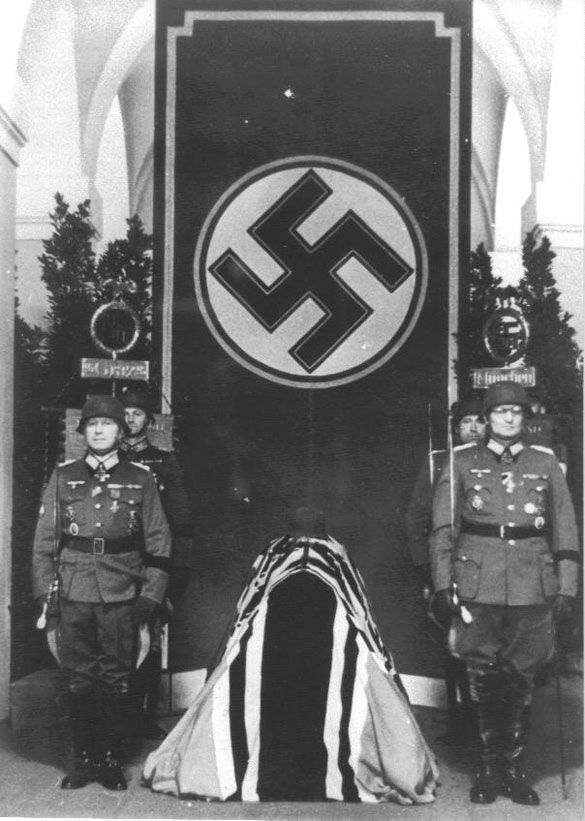 Günther Lütjens was born on May 25, 1889 in Wiesbaden.  He served as Commander of Torpedo Boats, Commander of Reconnaissance Forces and finally Chief of the Fleet.  A winner of the Knight’s Cross of the Iron Cross, he was killed in action in the North Atlantic aboard the battleship Bismarck on May 27, 1941 in combat with the British Home Fleet.

Before the final action, he made the following announcement to the crew:

“Seamen of the battleship Bismarck!  You have covered yourselves with glory!  The sinking of the battlecruiser Hood has not only military, but also psychological value, for she was the pride of England…The German people are with you, and we will fight until our gun barrels glow red-hot and the last shell has left the barrels.  For us seamen, the question now is victory or death!” 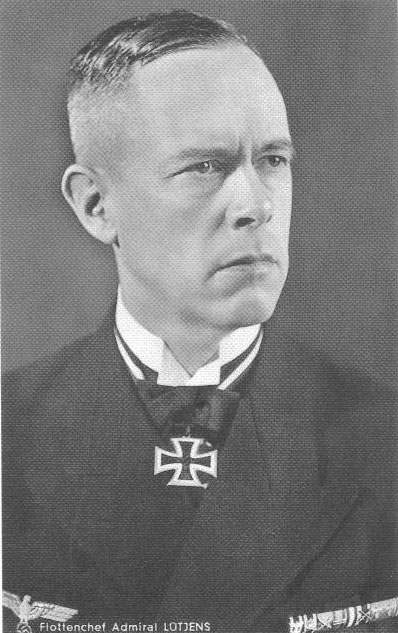 Heinrich Himmler (black uniform, in center) sitting with Martin Bormann (with hand on knee, right of Himmler.)  Himmler, Reichsführer of the SS, said of Bormann, “I hope I can succeed in outmaneuvering him without having to get rid of him.”  Bormann, Reich Leader of the Nazi Party, understood his position of power and said, “He who holds the Führer’s confidence, fundamentally needs neither rank, nor title nor decorations.”  Himmler committed suicide by taking poison shortly after the British captured him on May 23, 1945.  Bormann probably either committed suicide or was shot by Soviet troops a few blocks from Hitler’s bunker on May 1, 1945, although numerous post-war sources claimed Bormann escaped to South America. 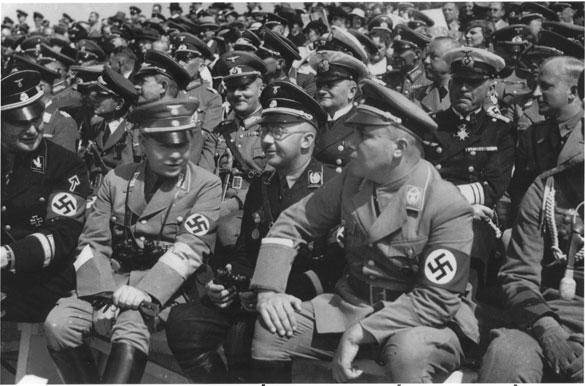 Wilhelm Frick, Reich Minister of the Interior.  On Heinrich Himmler (1946): “I could have broken Himmler’s neck myself, but Hitler always supported him.  Besides, Hitler didn’t want to do things my way.  I wanted things done legally.”  Frick was convicted of war crimes and hanged by Master Sergeant John C. Woods at Nürnberg on October 16, 1946.  His last words were, “Long live eternal Germany.” 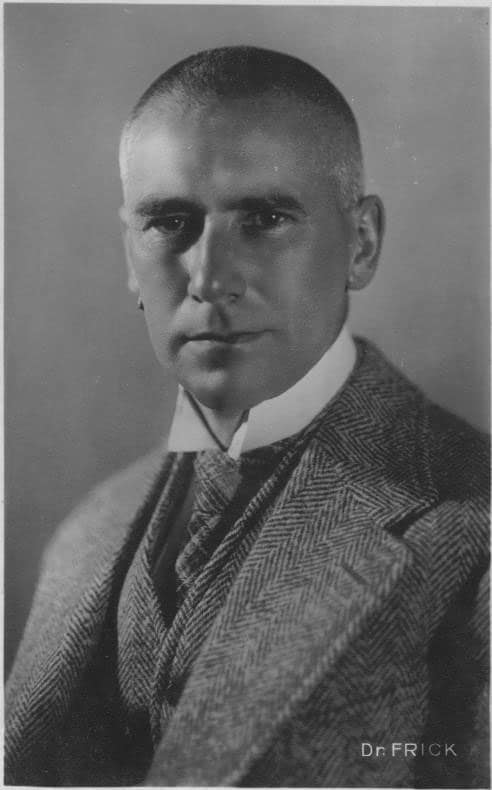 Josef Goebbels, Reich Minister for Public Enlightenment and Propaganda.  On Joachim von Ribbentrop (Reich Foreign Minister) (1940): “Ribbentrop bought his name, married his money and cheated himself into his job.”  Goebbels committed suicide by gunshot outside Hitler’s bunker on May 1, 1945. 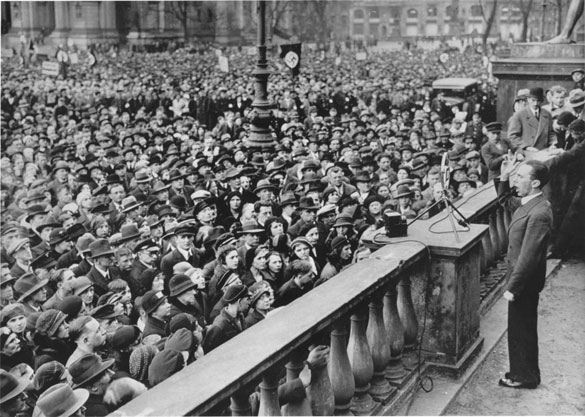 Julius Streicher, Gauleiter of Franconia and editor of Der Stürmer, Germany’s most violent anti-Semitic journal.  Streicher said of Hermann Göring, “He never really consummated his marriage – Yes I know it was Göring who was responsible for having me kicked out of my position as Gauleiter in 1940, on account of that story about his child being a test-tube baby.  But I can’t help that.  I must speak what I believe to be the truth.”  Streicher was convicted of war crimes and hanged by Master Sergeant John C. Woods at Nürnberg on October 16, 1946.  His last words were, “Heil Hitler!  Festival of Purim 1946 – and now to God.  The Bolsheviks hang you too – I am with God Father.”

Nazis on trial at Nürnberg; on the left is Hermann Göring, center is Rudolf Hess and right is Joachim von Ribbentrop.  Göring, the Commander-in-Chief of the Luftwaffe, said of Hess, the Deputy Führer, “But Hess – he’s insane.  He’s been insane for a long time.  We knew it when he flew to England.”  Göring took poison and committed suicide on October 15, 1946 – hours before he was to be hanged.  Hess died under mysterious circumstances on July 17, 1987, while confined at Spandau Prison in Berlin.  Von Ribbentrop was convicted of war crimes and hanged by Master Sergeant John C. Woods at Nürnberg on October 16, 1946.  His last words were, “God guard Germany!  God have mercy on my soul!  My final wish is that Germany should recover her unity and that, for the sake of world peace, there should be understanding between East and West.” 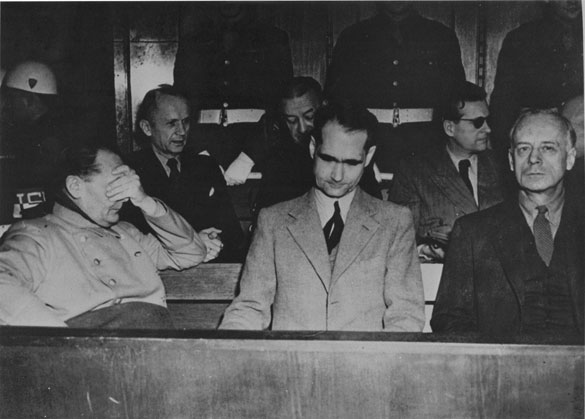